Last night (April 14th), at about 7:45 ET, the Cleveland Browns, as promised, debuted their long awaited new uniforms. The unveiling was webcast on the Browns website and carried live locally in Cleveland on 5ABC (WEWS-TV).

Courtesy of clevelandbrowns.com, rather than make a description of each combo, here are several of the combos.


Some highlights:
One that stands out as much as anything is the large "Cleveland" wordmark across the chest of the three jerseys. 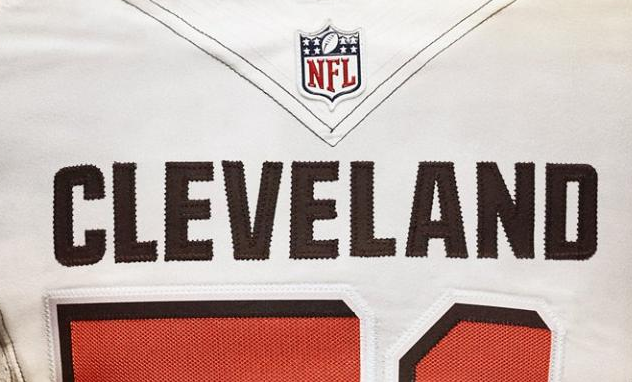 Also, the Browns follow the path of the Carolina Panthers and added an inscription to the inside of the jersey collar, 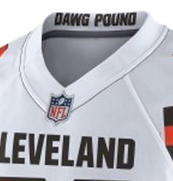 following the lead of some college football teams and numerous soccer teams in Europe.


The socks, you ask? Merely two pairs of hose; all orange and all brown. But we didn't see any players going with one orange and one brown at the unveiling.

All in all, a major change for sure. Surprising to this reporter is the use of orange numbers on the brown jerseys. Twice before in the Browns history have we seen this combination (1946 and 1984), and in each case, the team changed to white numbers as the orange numbers were considered difficult to see from afar.

But rumors abound that the orange jerseys will be the first choice of the Browns. If so, it would then appear that for the first time ever, the brown tops would be used as an alternate, meaning no more than three appearances a season, one in the preseason, and twice in the regular season.

As a reminder, if you want to see our blog on the history of the Browns prior to the coming see, here you go.

There they are, your 2015 Cleveland Browns!


On April 14th, the Cleveland Browns are set to unveil brand new uniforms. We are told that there will be three sets of white, orange and brown that will be mix-and-matched during the season. We have seen some "leaks" of an orange jersey that is purported to be the new look. We won't comment about that here. But we did think it would be a good notion to have a chronological look see at the history of the uniform.

In 1946, the Browns took the field in the fledgling All-America Football Conference. They wore plain white leather helmets, brown jerseys, white jerseys (which they wore most of the time), white pants and white or brown socks, that corresponded with the jersey color. The distinguishing characteristics of the jerseys were the unique (for that time) five striped pattern on the sleeves and socks and the drop shadow numbers. They used orange over white numbers on the brown jerseys and brown over orange numbers on the white jerseys. As the season progressed however, the Browns went with straight numbers on the brown jerseys, perhaps because of the difficulty of seeing the orange numbers from afar. 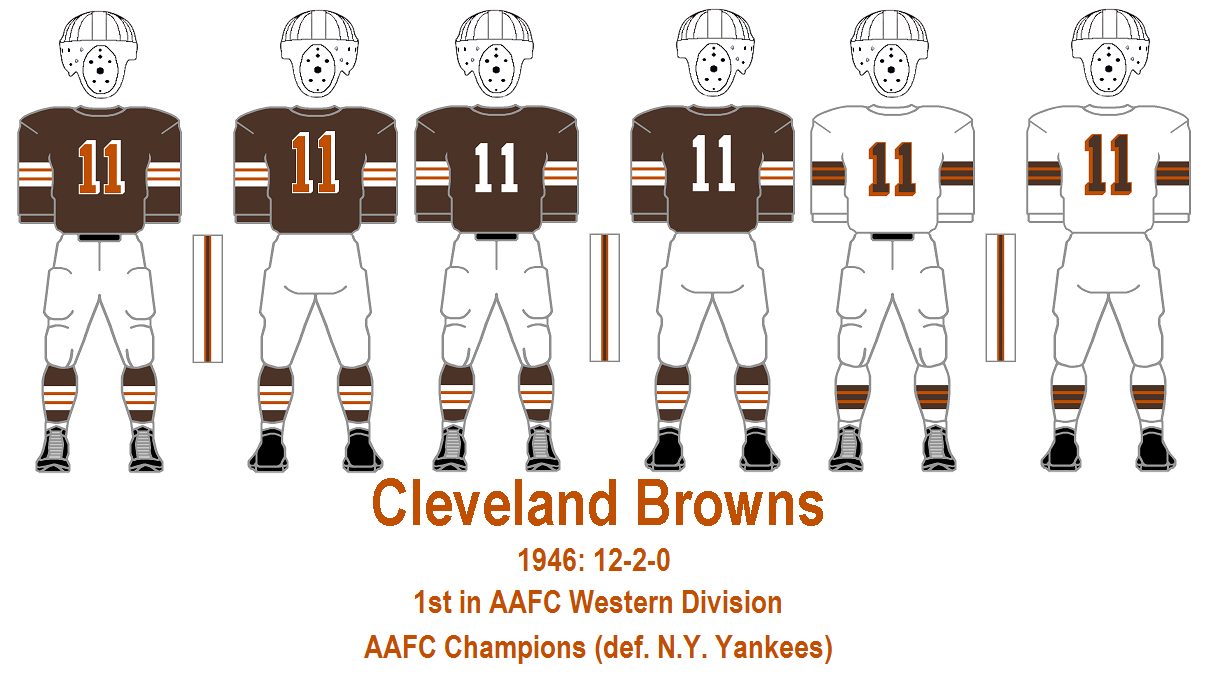 In 1947, the Browns reversed the striping pattern on the brown socks and this would be the look for the rest of their days in the AAFC. 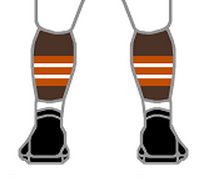 After the demise of the AAFC, in which the Browns were champions for each season of the AAFC's existence, the Browns entered the NFL in 1950 along with the San Francisco Forty-Niners and Baltimore Colts. The Browns introduced orange leather helmets for night games and an early season game or two before returning to the white lids. The Browns also returned the stripe pattern on the brown socks to match up with the sleeve stripes on their brown jerseys. 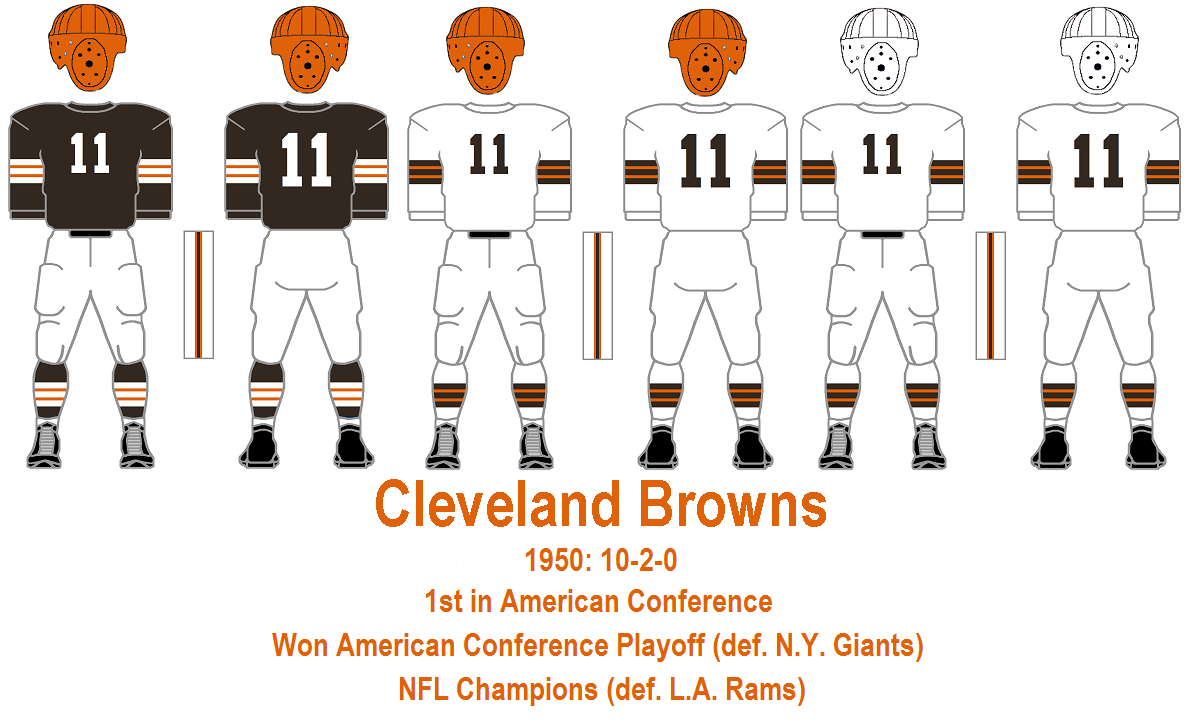 In 1952, the Browns shed the white helmets for good and coach Paul Brown ordered all players to wear plastic shelled helmets. The helmets were orange with a single white stripe up the middle.

For their first home game in 1953, a Saturday nighter, the Browns broke out orange jerseys for the first time, against the Philadelphia Eagles. Here is how the matchup appeared:
The Browns also wore orange jerseys for preseason games in 1954 and 1955. The numbers were straight brown.

In 1957, while other teams in the NFL were starting to add "TV numbers" to the sleeves of their jerseys for easier identification of those watching the game on TV, the Browns put a little twist on the innovation by adding the numbers to sides of the helmets instead of the sleeves.

As well in 1957, the NFL ordered that each team's dark jerseys be worn for home games only. Thus, the more familiar white jerseys of the Browns were relegated to being worn for away games only while the brown jerseys would be worn for all games until 1964.

For 1960 only, the Browns added brown stripes to flank the single white stripe on the helmet, with the players numbers remaining on the helmet.

In 1961, the Browns went along with most of the rest of the teams in the NFL and added TV numbers to the sleeves of their jerseys. This meant that the numbers on the helmets were removed, and the helmet was once again blank on the sides. While almost every NFL team was now sporting emblems on their helmets, the Browns avoided them. 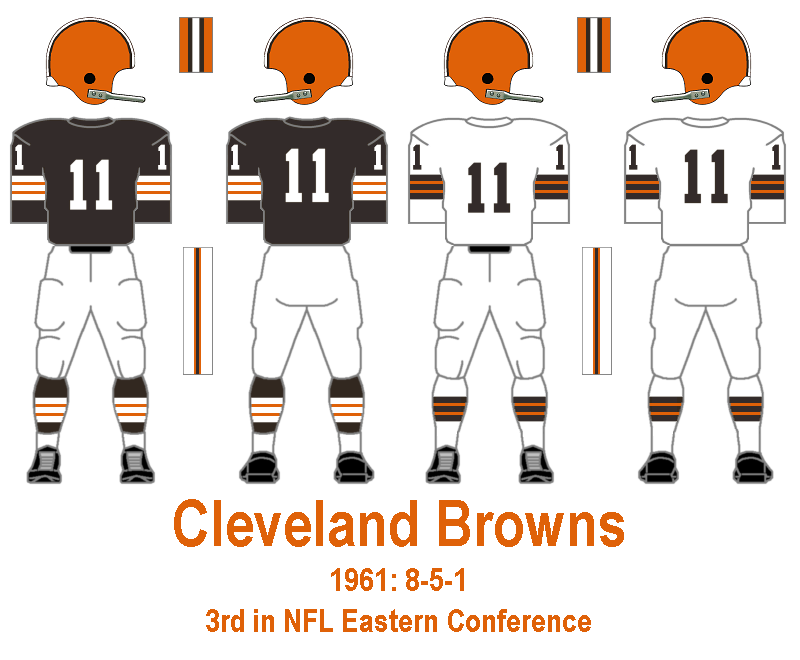 In 1965, the NFL released some publications with a league display of helmet logos, including those of the Browns, which featured a "CB" insignia on the sides. But this helmet never saw the light of day or night on a football field. 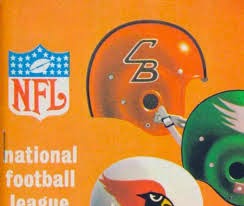 In 1968 with the brown jersey, then in 1969 with the white jersey, the Browns separated the sleeve stripes ever so slightly. And in 1970, as part of the merger with the AFL, nameplates were added to the backs of the jerseys. The GUD's 1970 Browns page shows these revisions. 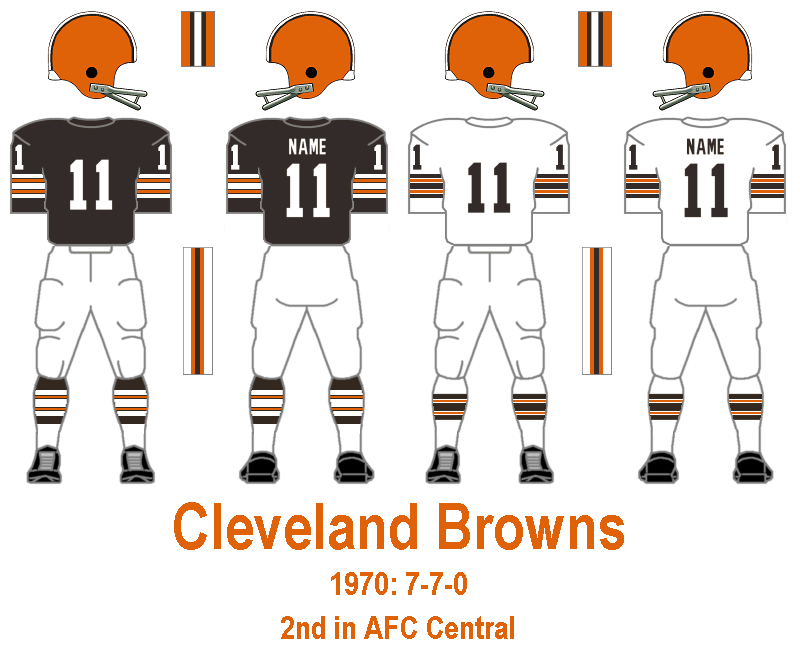 For 1974 only, the Browns wore brown striped socks with their white jerseys. 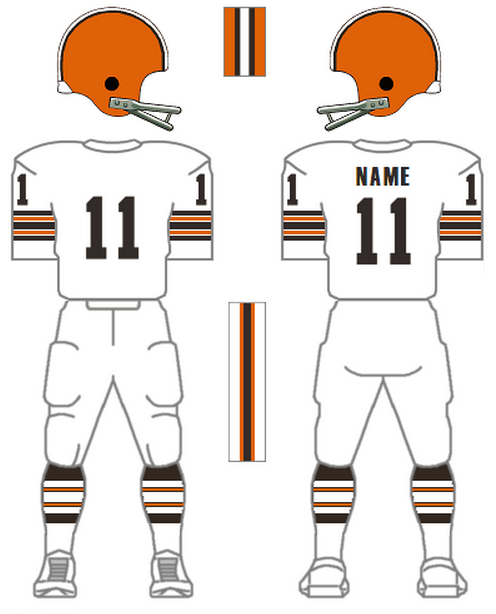 In 1975, the Browns unveiled a rather startling change to their wares, by replacing the white pants, which up to this point had been unaltered in their history.
By 1984, the Browns decided to make the first major overhaul of their uniforms in team history. While the helmet would be untouched, the new unis would feature orange numbers on both jerseys, with outlines on each. The familiar five stripe sleeve pattern would become a three striped pattern, The pants would return to white with a thicker new brown/orange/brown pattern. The Browns would wear the new brown jersey for their first preseason game against the Steelers in Cleveland. But both fans and media personnel alike complained of the difficulty of seeing the numbers. So, the Browns immediately ditched both sets of jerseys and went with easier to see white numbers trimmed in orange (brown jerseys) and brown numbers trimmed in orange (white jerseys). The orange numbered white jerseys thus never were worn. 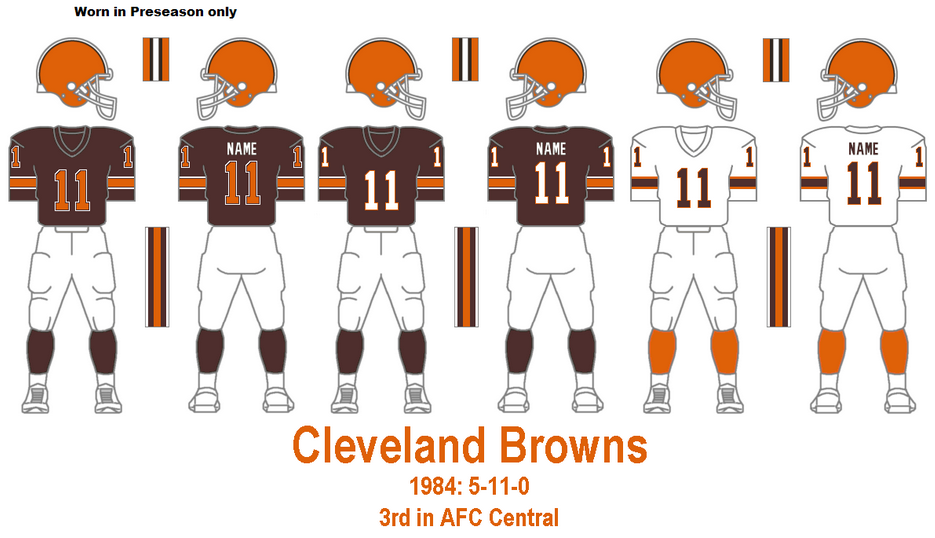 Apparently the new style didn't sit well with the Dawg Pound faithful, so the Browns returned to the more familiar threads the following season, 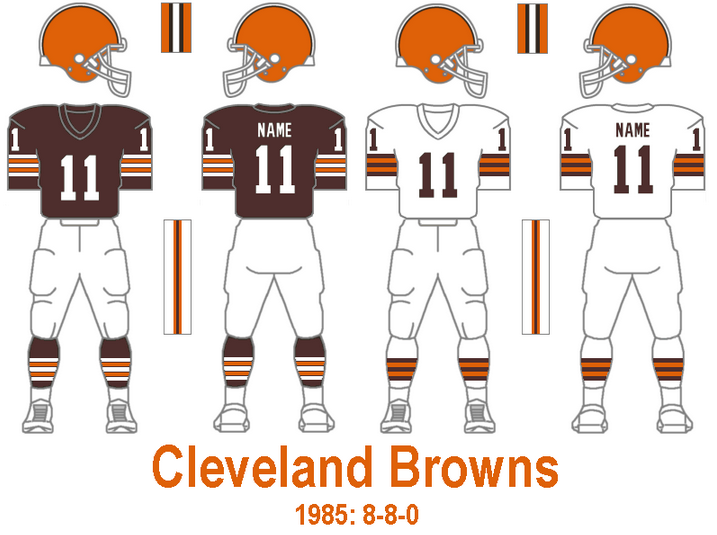 These unis more or less stayed the same through 1995 when courtesy of owner Art Modell, the franchise relocated to Baltimore and became the Baltimore Ravens. The move so incensed the city of Cleveland and the citizens of Northeastern Ohio, that the NFL declared that "officially" the Browns franchise was on a sabbatical and would return in 1999 with name, colors and history intact. Modell's Ravens would be deemed a new franchise. The 1999 Browns took the field with only slight modifications, the iconic logoless helmet was untouched, the TV numbers were moved from sleeves to shoulders, the pants stripes were thickened a bit and a patch commemorating the new team was worn.
In 2002, the Browns broke out orange jerseys for the first time in 47 years with a Week 7 home game against the Houston Texans. The following week they would wear a commemorative patch for the passing of owner Al Lerner. This is how the patch appeared on the resurrected orange top: 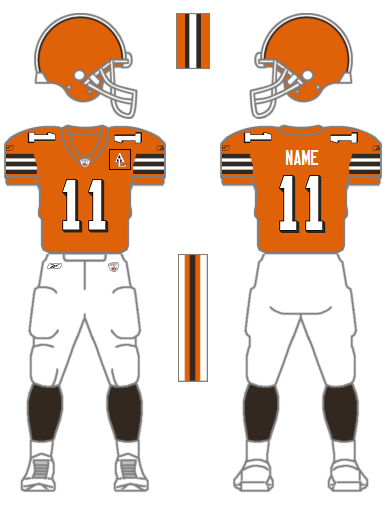 In 2003, the Browns joined in on the growing trend of mixing and matching uniforms with their NFL brethren. The Browns wordmark was added to the jersey front, above the numbers. Orange pants returned after 20 years, the white pants changed stripe patterns and the Al Lerner tribute became permanent and was fixed on the left sleeve stripes of all three sets of jerseys. Note also that the socks were changing over to a solid brown. 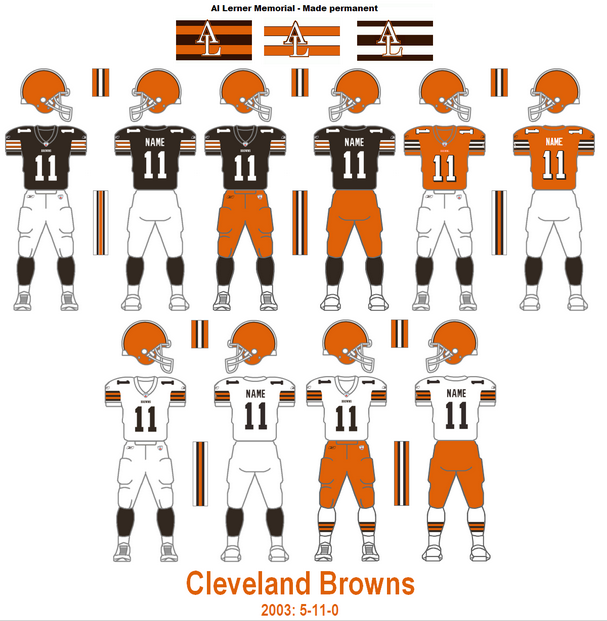 By 2005, the orange colored jersey and pants were dropped.

In 2006, the Browns sported a 60th anniversary patch and also wore throwback uniforms for the first time, in homage to the 1957-1959 home look with a Week 12 game against the cross-state Cincinnati Bengals. And by now, the sleeve stripes were the old pre-1968 connected five striped style. 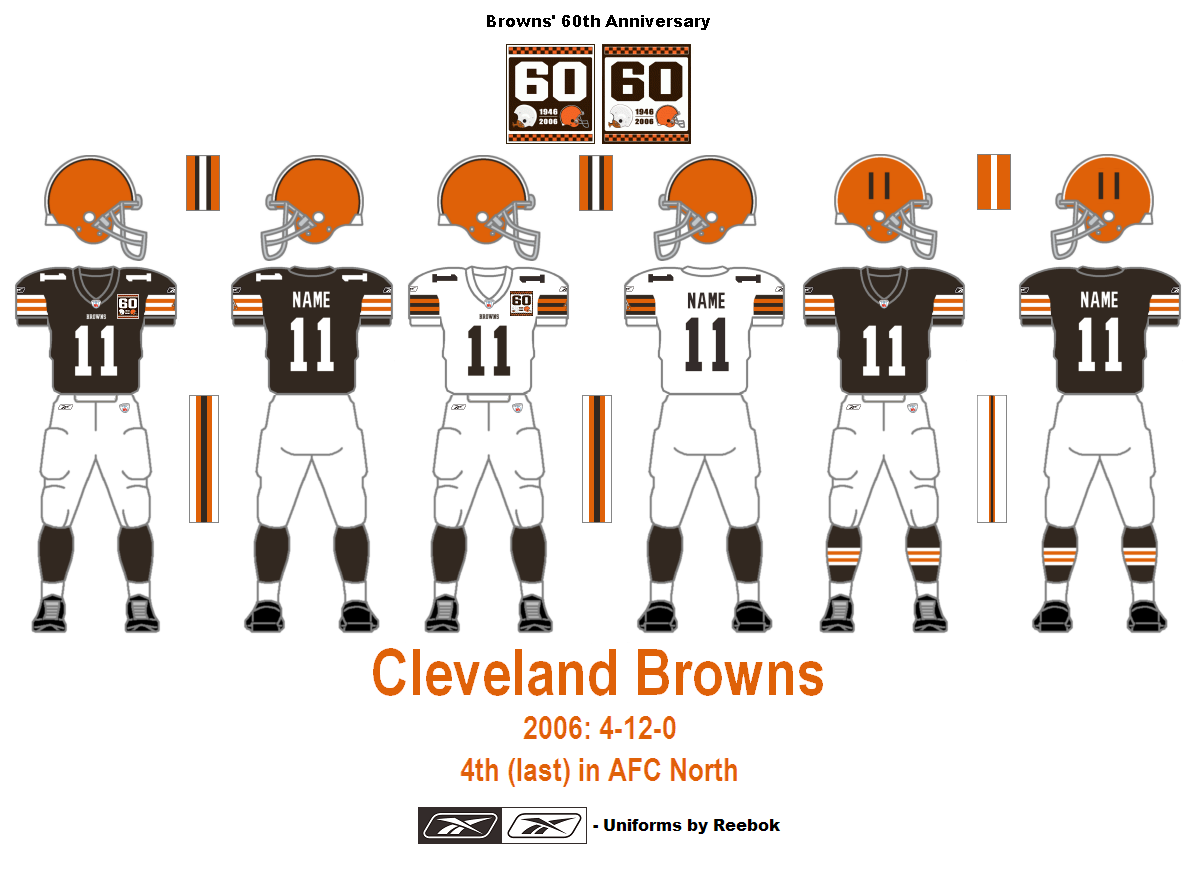 On Monday, August 18, 2008, the Browns showed off a rather shocking look for a preseason game at the Meadowlands against the New York Giants for a national ESPN telecast. A pair of solid colored brown pants worn with the white jerseys.
The Browns would not wear the brown pants again till the following 2009 season, when they wore them for all games in which they wore their white jerseys. The striped white socks would return with this look,

While the white striped socks were worn once again with the white jerseys, the brown pants would not return until the 2013 season. When they did, it was an unexpected all brown monochrome look for a Week 5 Thursday night game at home against the Buffalo Bills. They would also again wear the brown bottoms with their white jerseys. It was also in 2013 that the Al Lerner tribute was deleted from the jerseys. 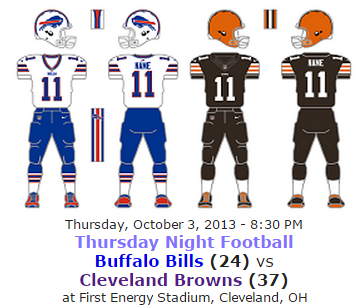 And for 2013, the Browns wore the basic four uniform combinations, white'white, white/brown, brown/white and yes,,,brown/brown.

As for helmet decals, the Browns have worn the following throughout the years:

And for a history of the Browns wearing white at home since 1957, here is that info:

So there you are, everything you ever wanted to know about the Browns uniforms through the years. On April 14th, a new uniform chapter will unfold for the Browns.

We'll report the unveiling here on the GUD. Be here!