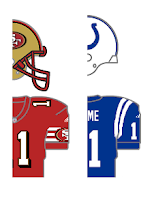 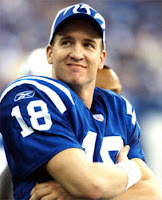 In the late 1950s and early 1960s, when NFL games were first being televised regularly, teams added numbers to the sleeves, to help the viewers at home identify players when they were at the line of scrimmage or the front or back numbers were otherwise un-viewable.

It has come to our attention, however, that the Pittsburgh Steelers' 1968-96 uniforms (along with apparently some years of the St. Louis Cardinals) employ a third option, which places the numbers somewhere in between, right around the apex of the shoulder.

While we had considered this before, in the words of our graphical engineer, Bill Schaefer:

"...if we put the numbers 'right there,' there'd be no way to make them look right. One of the limitations of the 2-D template is, along with the omission of helmet numbers, that TV numbers MUST be placed on the shoulder pads facing up or on the sleeves. I was never able to crack 'wrapping the one' from the top down around to the side and make it worth it." 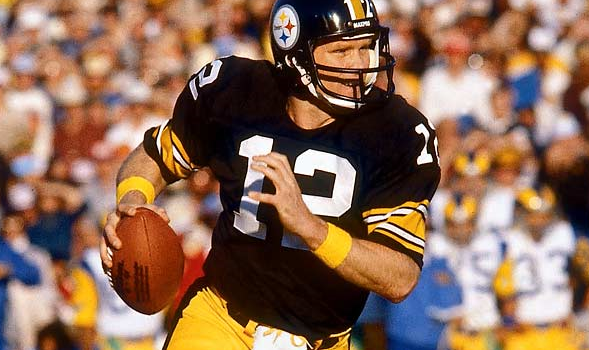 Numbers in this location, even more so than in the higher or lower locations, don't always appear in the same place on all players: 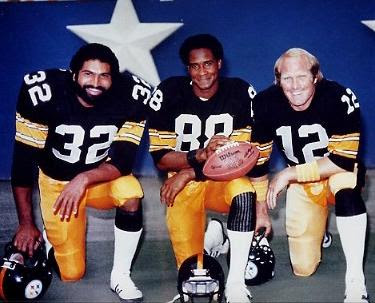 Says Bill: "...Franco's numbers are clearly facing up on his shoulder pads. If Swanny or Terry had any kind of shoulders, their's would likely be facing upwards, too."

So for the time being, that project was shelved, and we were content to just depict the numbers on the top of the shoulders (right), after we were unable to find a suitable location to more accurately depict them.  But with some help from The Jeff in the forum, we have decided to take another shot at this.  Here are six options that Bill and the guys have come up with as to how we could depict these numbers better.  Your input and feedback in the comments below will be most welcome. 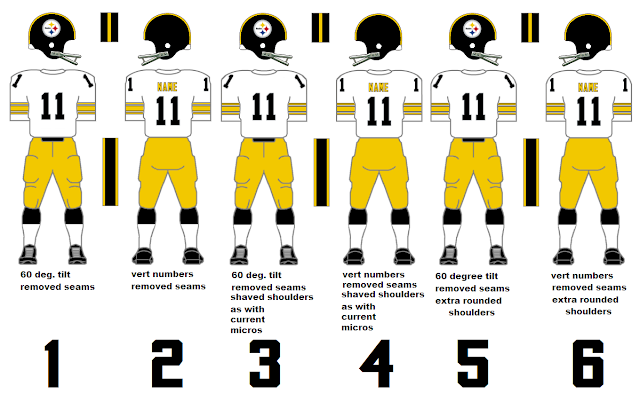 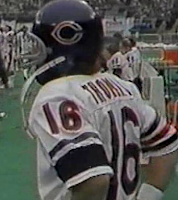 We have added to the database the memorial arm sleeve that the Chicago Bears wore for their December 23, 1979 NFC Wild Card playoff game at Philadelphia in memory of George "Mugs" Halas, Jr., who died of a "massive heart attack."  Halas was the team president and the son of Bears' founder George "Papa Bear" Halas.   Another change we have made is to the 1961 Giants, we have removed the white center stripe on two red-striped pants model and replaced them with the matching grey on all eight versions of the '61 Giants.
Finally, with the 1968 and '69 Vikings, we have made some adjustments to the uniform numeral, and the proper depiction of the "one".  Thanks to bigbluelarry (Giants) and Mako Mameli (Vikings) for these submissions.

Tomorrow we'll mark one week since we've launched the website, and we'll tell you all about some of the most surprising websites that have referred traffic to us, including one website that isn't even in English.  And beginning Monday, we'll start a five-part series looking back and discussing the past uniforms the Buffalo Bills have worn, as they get ready to launch their new look on Friday.
0 comments

Well, that research certainly gives us a better look into what these two teams wore in 1941 and answers the question about the Eagles in particular.

Speaking of colors that teams have worn, I have received some feedback from comments I made yesterday about the color yellow.  Calling yellow gold did not originate with the Packers and Steelers fans of the 1960s and 1970s as I may have alluded to.  As was pointed out me, medieval tinctures (colors) of the European nobility used "Or" -- a yellow-hued color to represent gold. That is, even way back then they called the color yellow gold (my guess is for the same reasons that I said the Packers and Steelers did, became the name yellow has a negative connotation.)  I was in err to suggest that this all began recently.
But I stand by my stance that yellow is yellow and gold is gold.  The St. Louis Rams may have changed their colors not from yellow to gold, but from "gold" to "metallic gold."  As I said you can call it whatever you want to call it.  And if the Steelers and Packers fans want to call yellow gold, they will continue to do so, I can't change that.  That's fine, we're not going to be able to stop them.  But, like I said, you can call anything by any name you want to call it.
Packers fans, then, can call themselves the green-and-gold, and steelers are black-and-gold, that's fine, but then remember, Notre Dame would not be the blue-and-gold anymore, but rather the blue and metallic-gold.  But wouldn't it be easier just to call yellow yellow and gold gold?
At any rate, I appreciate the feedback very much, and let's keep this discussion going.

Speaking of the Broncos, we have another change we have confirmed.  As we told you yesterday, we were looking at the throwback jerseys the Broncos wore in 1994 for the NFL's 75th anniversary celebrations.  While there are many pictures of the home orange throwback jersey they wore on 9/18/94 against the Raiders, there are surprisingly few images available of the following Monday Night game at Buffalo when they wore the white road throwbacks.  In the database we originally had blue sleeves on these jerseys, and I don't know if this was just an educated guess in the absence of any real proof, i.e. the home throwbacks were orange with the blue sleeves, so therefore we'll assume that the road throwbacks were white with blue sleeves.

We have no problem with using this type of logic, if you have no proof of anything, you go with your best educated guess.  As it turns our we were able to locate proof that the throwback sleeves were orange.  While the video of that game was unavailable to us, I did remember that the Broncos played on Monday Night Football again later that season, in a particularly memorable game against the Chiefs -- the famed Elway vs. Montana matchup -- and this footage was available to us.  Monday Night Football tends to use footage from previous games in the opening montage, and more often than not they'll use previous MNF footage when it's available to them, and sure enough, when Hank Jr. started singing, there was the Broncos road throwbacks in the background.  Additional screenshots here in the forum. WD1983 also supplied us with an image from that game on a 1995 football card (left). 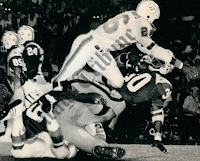 Another Dolphins' change comes to us courtesy of dirwulf, and that is a Chicago Tribune newspaper image (right) he has found of a 1973 Dolphins' player, Lloyd Mumphord, wearing a stripeless jersey during the preseason.  In this you can see he is clearly wearing the "dolphin-in-the-sun" helmet variation that we discussed yesterday.  As we told you, sometimes the Dolphins wore differing helmets in the same game, but with no specific proof that any Dolphins wore the other helmet variation in this game, we'll stick with just this helmet-jersey combination for now, although it is probably reasonable to assume that there very well may have been Dolphins in that game with the "dolphins-across-the-sun" helmet variation.  Dirwulf also tell us in the forum that RB Norm Bulaich (left, pictured in 1978) continued to wear the "in-the-sun" variation, possibly as late as 1979. 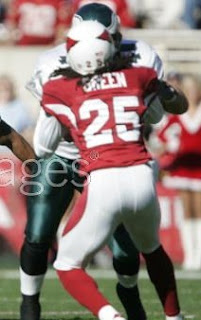 One final change was submitted to us by andrewharrington, and that was the name lettering on the 2005 Arizona Cardinals jersey backs did not have an outline around the letters as they did beginning in 2006.  In 2005, they were simply white.

Which brings us to one important change, beginning tomorrow in an effort to bring a professional journalistic atmosphere to this "blog", we will only be attributing credit for submissions to people with proper names.  If you want to continue posting with a handle in the forum that is fine, however, you'll notice that timmyb in the forum is referred to as Tim Brulia here in the blog, and accordingly we will only be referring to "real people" here in the future.  So Andrew Harrington (or is it Andre Wharrington?!) and Jay Braiman will be mentioned here in the blog when they give us further contributions, but names like Dirwulf, WD1983, bigbluelarry, and slats7, will no longer meet the naming conventions of this enterprise.  We, of course, will continue to accept your contributions, however, please understand that if you retain the anonymity of a forum handle, we will be unable to give you proper credit here in the blog, unless you submit your real name along with it.

On a related issue, forum PMs and emails are fine if you want to wish us a happy birthday, but if you have any questions related to football uniforms, or the site or anything of that nature, we ask that you use the preferred method of getting in touch with us by posting it in the forum.  That way others can see the contributions and comment on and discuss them, and if it is a simple question like, "How come you only depict the number 11?" or "Why don't you do the pre-1933 uniforms before doing the head-to-head matchups?" or "Are you guys stupid, don't you know that [insert team]'s helmet was [such-and-such color] during [such-and-such season]?"  I'm sure others will appreciate your question and the resultant answers.

Tomorrow, Tim Brulia will be bringing us some long awaited research on the 1941 Philadelphia Eagles' colors that I know everyone is dying to hear about!  So be sure to join us Friday for that and keep those submissions and corrections coming in the forum!
1 comments

Well, there you have it. Thanks to all those who have helped make this database that much better by offering corrections.  Keep them coming!  Tommorow we'll bring you that Broncos throwback change we mentioned, plus updates to the New York Giants and to a stripe pattern of the Minnesota Vikings for a year in the mid-1960's. Join our forum and you too can be part of the debate.
7 comments