With the 2013 preseason right around the corner, The Gridiron Uniform Database will take a short critique on the new uniforms for the coming season.

Minnesota Vikings:
Helmet:  Appears to be unchanged in design, but the helmet shell has a matte finish to it, slightly lighter than the purple jersey colors.
Jerseys:  White first. The Nike style collar has been removed.  The collar is white. The distinctive wordmark appears to be a tad larger than before.  The numbers garner the big talk. They are solid, trimless purple. The right edges have a pointy flair on some of the numbers.  These will have to be seen a little more to really get a feel for how they'll do in game action. The TV numbers are on the shoulders and there is striping to replace the wraparound white sidewalls and sleeve trim.  The stripes are separate purple top and yellow bottom, with the purple flaring upwards towards the backside. On the back, the Norseman logo on the nape of the neck disappears. The NOB's in matching purple sees the serifed ditched for a style similar to the flairish numeral font.
The Purple jerseys has similar features. Solid purple collar, the slightly larger wordmark is a solid yellow instead of white. The fancy-dan solid white numbers also have the right side pointy flair front and back.  The TV numbers are positioned on the shoulders and the sleeve stripes are two separated stripes with the upper white flaring upward as you to the back and the bottom yellow stripe stays straight.  The NOB is a solid white with the flairy font of the numbers.
Pants:  The white pants lose all of the snaky swirls of the 2012 model and go a bit conservative, with the straight stripes.  The back stripe is a medium thickness of purple, followed by a thin yellow, fronted by a thin stripe of purple.  The Vikes also introduced a purple pair of pants, similar to the whites, with the back stripe medium white, followed by a thin purple stripe and fronted with a yellow stripe.  One would think the white pants will get by far more exposure, but the purples could make more than a few appearances.
Socks:  No changes, still solid pruple.

Miami Dolphins:
Helmets:  They remain white, but the logo changes a lot. No longer is the Dolphin wearing a helmet, he also appears to be taking a sideways jump through the updated sunburst instead of a headstrong leap with the sunburst in the background.  The helmet stripes, while simplified, have elements of minute detail.  The center stripe is a thick aqua, flanked by two micro-thin stripes, the inner a darker aqua, and the outer in orange.  The facemasks are now white instead of aqua.
Jerseys:  The jerseys appear to be quite tame, there are no stripes, nor trim of any sort.  The numerals are a customized font.  On the aqua jerseys, the numbers are white, flanked by thin deep aqua and then thin orange outlines.  TV numbers are on the shoulders, and a quite small logo is on the sleeve.  The new wordmark is in white.  The NOBs for the jerseys are rather generic and trimmed in orange.  The white jerseys are quite basic as well.  Aqua numbers trimmed in orange and deep aqua are on the front, back and shoulders.  Wordmark in plain aqua, NOBs in aqua trimmed in orange, and the small logo on the sleeves.
Pants:  The white pants mimic the stripe pattern on the helmets.  The aqua pants have a thick white stripe, flanked on both sides with thin deep aqua (inner) and thin orange (outer) stripes.  One interesting kick: The Dolphins added "MIAMI" on the center rear of the belt tunnel of both pairs of pants. Certainly a first!
Socks:  The socks are solid aqua when worn with the white pants, but appear to have be topped by deep aqua when paired up with the aqua pants. Game action will tell the tale to confirm. 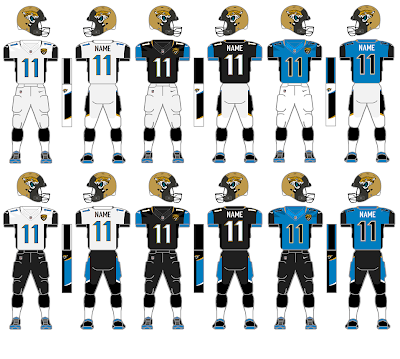 Jacksonville Jaguars:
Helmets:  The helmets change for the first time ever (not including the prototypes when the club was first born).  And they are innovative for NFL standards.  The helmet gradiates from front to back, going from black and evolving to gold around the sides and back.  The revised logo graces the sides.
Jerseys:  The Jags drop the thin wraparound stripes on all jerseys and overhaul the look.  We'll start with the whites first.  Numbers are teal in a customized font on the front, back and shoulders, with microthin gold and black outlines.  There are black sleeves and side panels.  The NOB is a solid black.  The wordmark is replaced by a black "badge" on the left breast that says "JAGS" with the new logo.  The black jersey has similar features of the white, with white numbers in the normal places, trimmed in thin teal and gold, and a white NOB, as well as the badge.  The sleeves are teal with matching side panels.  The Jags also introduced a teal jersey, likely to be used as the alternate, with black numbers trimmed in white and gold.  The NOB is white, the sleeves and side panels are black and the black badge is positioned similar to the white and black tops.
Pants:  The Jags have two sets of pants, white and black.  The whites have a thick vertical black stripe that only starts at an angle near the top side and only extends to the knee area, also ending at an angle.  The top of the stripe is edged in teal and the bottom of the stripe is edged in gold, with the logo placed at the hip above the teal edge.  The black pants have a similar design, with the thick stripe in teal, topped by gold and bottomed by white, with the jag's head topping the stripe.
Socks:  With all of that wild action above, the hose are a very plain black.

Summing these changes, I happen to like them. A semi-back to basics for the Vikings, though the numbers touch up to me is unnecessary. The Dolphins, apart from the major alteration to the beloved "Flipper", head to a very generic style with less orange.  The Jaguars appear to be the next in line to the Seahawks, much bells and whistles with the teal (apart from the alternate jersey) continuing the trend to be a trim and not a main color.

A few other changes to note:
San Diego Chargers:  The Chargers are changing the NOB on the navy jerseys from white to yellow.  And the Bolts are also adding a single yellow stripes to the socks.  The sock change - as of now - is unconfirmed.
Indianapolis Colts:  The Colts will be wearing a patch commemorating their 30th season in Indy.
Minnesota Vikings:  In addition to the uniform changes, the Vikings will sport a patch for their final season in Mall of America Field, likely to be worn on the purple jerseys only.
Tennessee Titans:  The Titans will wear patch to celebrate 15 seasons as the Tennessee Titans (they were the Tennessee Oilers in 1997 and 1998).

There will also be more subtle changes coming in 2013, notably collar trim changes as Nike and NFL teams will be tweaking some of the uniform innovations that first saw the light in 2012.  More on the equipment side of things, thigh pads and knee pads will be mandatory in 2013.

Whatever changes are made this season and whomever stands pat for the season just in front of us, the GUD will monitor, note and revise as necessary.