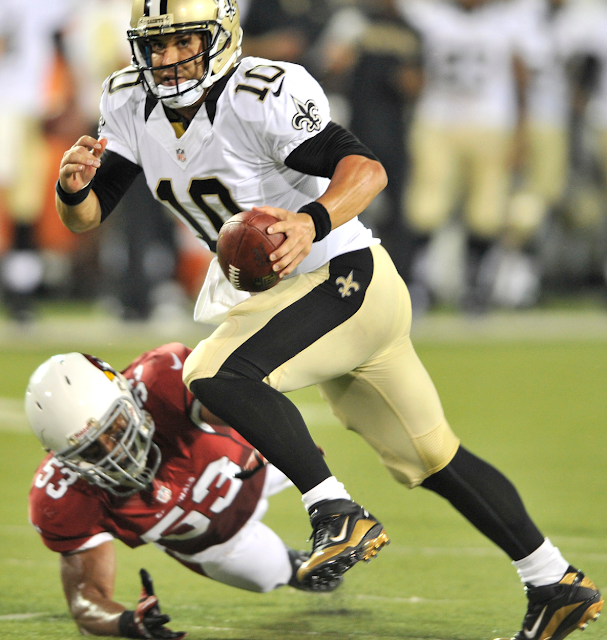 Well the new season is underway.... sort of.  The preseason kicked off Sunday night with the Saints and the Cardinals playing in the annual Hall of Fame Game in Canton.  We got our first look at the new Nike uniforms, and while the numbers on the back weren't quite as large as we were led to believe by what was seen at the unveiling, there were a few surprises.  The new helmets didn't seem to be worn by everyone, only a few players had the multi-colored shoes (most were wearing black or predominately black Nikes) and there was general disappointment from everyone about the geometric shape of the Saints collars coming to a point on either side and being a different color from the jersey.  The Cardinals collars matched their red jerseys, so apparently different teams will be displaying these new Nike jerseys differently. 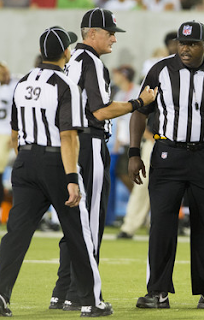 Another change, the officials' uniforms no longer have the position abbreviation, but we don't know if this is a permanent development or just a temporary thing because of replacement officials being used.

The game itself was pretty boring.  Drew Brees took the Saints down the field on the opening drive for a touchdown, Kevin Kolb got hurt, and there were a bunch of punts.  The highlight was Mike Mayock singing "Play That Funky Music" as the game wound down to an slow end and the Saints prevailed 17-10.  (Is it a law that in every preseason playoff game the announcers must continually remind us how much they don't want to go into overtime?)

Like I mentioned, the back numbers weren't as large as we had thought, so it led to our Bill Schaefer having to scramble to whip up new 2012 jerseys, as he had based the initial 2012 look on what was shown back in the Spring.

But alas Bill did a great job in knocking out those redos (he spent all day Monday touching the rest of the league up) and now all the 2012 uniforms are pretty much ready to go.

So to everyone worried that the Nike-fication of the NFL was going to make the uniforms look absurb or unrecognizable, it pretty much looked like the Arizona Cardinals and the New Orleans Saints on the field Sunday night (Saints' collars now withstanding).  Can't guarantee that when the Seahawks take the field.

While we are still about a month away from the regular season and some exciting new things we will be unveiling then, we do have a little bit of a sneak peak for you now.  Along with our usual Tuesday update which saw us roll out the 1928 uniforms to the site, we have also added a couple new links to the bar at the top.  You'll now see "index" and "chat".  To aid in your navigation of our site we wanted to add a full-featured index which will allow you to much more easily find everything on the site.  That's been one of the biggest complaints in emails I get, that the site is confusing.  I am trying to make it easier to use, but if you have any specific suggestions feel free to email them to me.

Another thing we have added is a chat room... mainly it will be for discusses what teams are wearing in real time on Sundays this fall.  Many a time it has been 12:40 PM and I got one eye on FOX and one eye on CBS, and one window open updating the website and another ftp'-ing up the changes as I work on getting the new matchups added to the site in real time, working at a fever pitch trying to get everything done as fast as possible.  When the dust settles and after I have all of the 1:00 games in, sometime around 1:15, I usually can take a deep breath and check my emails and see that that Bill and Tim have been sending me emails over the past half hour some with useful information I could have used twenty minutes earlier, if I had only had time to open my email client.

So now with this chat room, I can have one small window open (or most likely a separate machine dedicated to the chat room) and be able to get real time updates from Bill & Tim, but also from anyone about what the players are wearing.  If you happen to be at a game and you get to see that a team is wearing a particular combo before the nation sees it on CBS NFL Today or FOX NFL Sunday, by all means let us know!
The chat window is open now,  so feel free to stop in and say "Hi!"  (If anyone else is in there.)

This could come in handy during the preseason, as I don't have NFL Network this year, so it may be hard to get on time updates.  We aren't promising real-time updating during the preseason, but if you see your local team's preseason game and see what they are wearing before much of the country, hop into the chat room and let us know.  Hopefully I'll have my high speed internet back up by September 5, but for now updates are getting done as soon as they can, with limitations at times.

This is just the beginning -- like I said we have a whole bunch of new features in store coming in September when the regular season starts.     For now, we'll be back on the blog on Friday with a new "Matching Rivals" piece on the San Francisco 49ers and my favorite team, the Tampa Bay Buccaneers.  (!?)
0 comments