A little while ago, Bill posted a blog entitled, "What's Cooking?"  Well, the answer in this blog is, "dinner is served."

Bill alluded to the update to the Chiefs uni history, with the colors, helmet logo and the KC in the logo not quite right.  If we have to uphold our unofficial motto, "just get it right," then do it we shall.  We made the red more to actual tint and and gave the helmet logos a much needed face lift.  We made color adjustments to the Chiefs' predecessors, the Dallas Texans as well.


After this, Tim wasn't really thrilled with how the Eagles helmet wings looked, either.  Bill chimed in with his concern on how the Eagles color looked.  Bill opined that the green looked more of a pea green as opposed to the kelly green shade.  Ever the skeptic, Tim needed a bit more of visual proof, and eventually, Bill was able to sway Tim in the proper direction.  The color modification goes all the way back from 1935 through 1973 (excluding the 1941 season when the Eagles experimented with a black, midnight blue and silver color scheme), including the 1943 Steagles season, when the Birds merged with the Steelers.  The wing adjustment goes from 1954 through 1973.

To top it off, we also made an adjustment to the Chargers' helmets.  Namely, the lightning bolts.  To us, the bolts looked a little fat.  Bill streamlined the bolts a bit to what they actually look like on the helmets.  Again, much needed and long overdue tweaking:


These are just a few examples of the many adjustments and discoveries that have been added to the GUD. in recent days. You can find all of the others here: http://gud-updates.blogspot.com/


And now, dut-da-da!  The GUD is proud to announce the completion of a project that we have been working on in earnest since the end of last year's Super Bowl (Ravens-49ers).

As you know, it has been the goal of the GUD to be able to show you each week's uniform matchups since 1950. We had been working on it bit by bit, piece by piece, year by year.  Finally, this past Sunday, April 13, 2014, the task has been completed.  The Gridiron Uniform Database is now able to show you the uniform matchup for every single regular season game and post season game since 1949!  This includes every National Football League game for the past 65 seasons, every American Football League game ever played and the 1949 season of the All-America Football Conference.  Using Bill's graphics, Tim's research and Rob's entering the fruits of his cohorts' labor to the GUD, this monumental task has achieved fruition.

Want to know what the Patriots at Jets encounter from Week 12, 1985 looked like? Here it is: 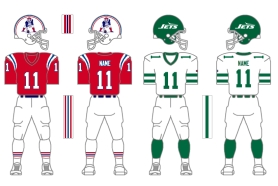 Or perhaps, the Niners at Rams game from the first week of the season in 1955?  Looky here: 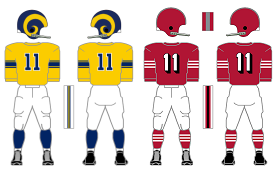 To navigate to the week of the season you wish to see, please follow these simple rules:
1) On the GUD's homepage, click on the season along the left hand column
2) Below the season banner, example "2002 NFL Teams" is a row of numbers that corresponds to the weeks in that season, plus initials that indicate the post season weeks (in this case, WC=Wild Card, DP=Divisional Playoffs, CC=Conference Championships, SB=Super Bowl, PB=Pro Bowl). Click on the week you desire to see (example: Week 7).
3) All of the week's games will be displayed, with the visiting team on the left side and the home team on the right side, with the uniform the teams wore for that game.  Here is a link to this example's games played that week:  http://www.gridiron-uniforms.com/weekly/2002/2002wk7.html

Once we get to seasons prior to 1962, you'll note that fewer teams will have helmet logos and thus it may be tough to identify teams the farther back in time you go.  Till then, it may be a good way to hone your detective skills by trying to correctly identify the teams depicted based on color and trim patterns!  Seriously, we hope to eventually have all teams labeled for seasons prior to 1962 for easier identification.  Can we go back even further in time?  We'll do our best, but photographic evidence will be much more difficult.

As always, if you notice any errors or missing information, please do not hesitate to contact us by clicking on the "Contact" tab found just below the GUD's banner at the top of the home page.

Now that you've had a healthy meal of uni goodness, what's for dessert? Watch this space to find out!