Before I get going, Bill just posted a GREAT blog on what the Cowboys have in store this year's Thanksgiving game, please check it out!

14) Panthers-Dolphins:  CAR in black/silver, MIA in white/white.  You don't want to see the Panthers suffer in all black, so this usual combo at Miami is proper.  And the Dolphins surprise absolutely no one in all white.  It is a rather so-so encounter. 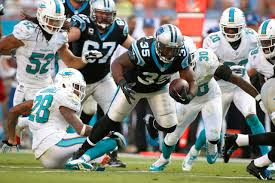 13) Broncos-Patriots:  DEN in white/white, NE in navy/silver.  Though these two are perennial contenders, this matchup is not really giving me the excitement.  Lot of navy, slivers of orange and red, and a dose of silver.  Patriots had the chance to pull a coup and go all navy, but that - alas - was a pipe dream. So is this matchup.

12) Bears-Rams:  CHI in white/navy, STL in navy/navy.  A little much on the navy.  A case of nice unis separately, but together, too much darkness.  Rams in white pants would have bumped this matchup some.  It is still pretty good as I see it, though.

11) Jaguars-Texans:  JAX in white/black, HOU in navy/navy.  Another freakishly dark matchup. At least the Jags goofy helmet breaks the dark monotony.  I like the Texans rare all navy look, but it could have been helped if the Jaguars had gone all white for this one.

10) Steelers-Browns:  PIT in white/yellow, CLE in brown/brown.  A new wrinkle in this 60+ year old rivalry. Browns go all chocolate for the second time this season and do it against their nemesis, who wear their usual whites and yellows.  Not nearly as excited as when the Browns wore the all brown look earlier, but it does drop a log on the fire against their close neighbors.

9) Buccaneers-Lions:  TB in white/pewter, DET in honolulu blue/silver.  A lot of metal, but the pewter mixes well with the silver.  And the red and black trim blends well with that magnificent Lions blue and a touch of black.

8) Jets-Ravens:  NYJ in white/white, BAL in purple/black.  The Ravens carry the load in this pairing.  I am pleased to see the Ravens break out the purple and black, which is definitely the best look for them against the Jets head to toe whiteness.  Had the Jets at least considered either green pants and or even green socks, could have been better.

7) Saints-Falcons:  NO in white/black, ATL in red/white.  Long time rivals usually look good when playing each other, and this game is no exception.  While there's plenty of black to go around, there's a lot of red and gold to trim.  Sharp matchup.

6) Cowboys-Giants:  DAL in white/mint, NYG in blue/white.  The Giants know when to wear their new white pants.  This was and is a good opportunity.  The white pants save the game from gray/minty overkill, and it does seem to make the blue jerseys pop a little and really works well off the Cowboy normals.  A-OK matchup.

5) Chargers-Chiefs:  SD in white/navy, KC in red/white.  Nothing out of the ordinary in this traditional matchup, but it is a good one.  Chargers look good with the white jerseys and navy pants, trimmed neatly in yellow when matched up with the Chiefs red and yellows.  I'm fond of this one.

4) 49ers-Redskins:  SF in white/gold, WSH in burgundy/yellow.  Reds and golds.  In various tones.  Niners wear the rather generic whites, but the bright red numbers and trim go well.  The Redskins in burgundy, with helpings of yellow.  I like how this one works.  Not too much of the reds, golds, and even whites, but a perfect blend of the shades.  Good one.

3) Titans-Raiders:  TEN in white/navy, OAK in black/silver.  For whatever reason, I think this is winner.  Not too much of any good thing here.  Raider sleek in silver and black, Titans looking good in the white and navy combo with columbia blue on the sleeves.  I enjoy this one. 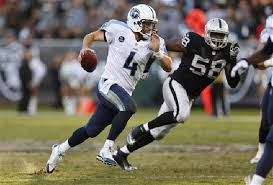 2) Vikings-Packers:  MIN in white/purple, GB in green/yellow. Classic look in my eyes when I see the Vikes in delicious purple (pants wise) while the Pack go in the sweet green and yellow combo.  Very colorful, not too much darkness or white.  Rather sweet, I think. 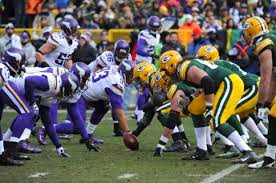 1) Colts-Cardinals:  IND in white/white, ARZ in red/red.  After a year's absence, the Cardinals red slacks return, and they picked the perfect opponent to do so, the white-white Colts.  The Cardinals go all red and it contrasts sharply and perfectly against the stark white, and the Colts slight blue trim.  Good move. 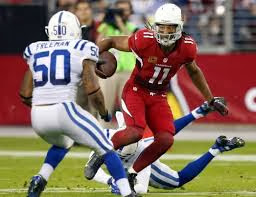 We at the Gridiron Uniform Database would like to wish all of you a very Happy Thanksgiving!

What's Longer Than 'Once in a Blue Moon?' - UPDATE 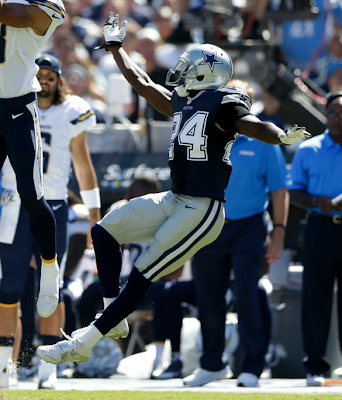 On Thanksgiving Day the Dallas Cowboys will not wear white jerseys at home.

On Thanksgiving Day the Dallas Cowboys will not wear their fauxback navy jerseys at home.

For the first time, they will wear their regular road navy (the road jerseys didn't actually become navy until 1981 and were basically royal blue before that) jerseys at home. The regular blue/navy jersey has not been worn at home since 1963 when they last wore their standard royal blue home jersey - their original uniform.

During the NFL's 75th Anniversary Season in 1994, teams began the trend of wearing what would become known as throwback jerseys/uniforms. The New York Jets actually wore a throwback uniform the previous year in honor of their Super Bowl III triumph, however, they wore their regular green helmets instead of a white throwback design. In 1994, the Cowboys assembled a fairly accurate throwback to their early 1960s design, except they chose to wear the normal silver helmet instead of using a white one. They only wore the combination once for a Monday Night game against Detroit.

From 2004-2012 the Cowboys utilized a different 'fauxback' uniform. This one was basically a navy version of the Cowboys' first uniforms worn from 1960-63 replacing the royal blue that was used back then.

Anyways, I got to thinking about how infrequently the Cowboys actually use their gorgeous navy jerseys - rarely more than once or twice per year in recent years. Then I began to wonder...how many teams are there in the League that have never faced the Cowboys in their navy jerseys?

Since the end of the 1963 season, the Cowboys have essentially had the same home and road white and blue combos, with the aforementioned change from royal to navy in 1981. We are talking about 50 years of Dallas Cowboys football!

Here's what I found for teams making the Cowboys wear the regular, non-throwback, non-fauxback, blue jerseys...

That's 123 times in about 50 years, averaging a little more than twice per year. This also means that there are nine teams that have never faced the vaunted, navy jerseys. That list will drop to eight should the Cowboys follow through and wear the navy jerseys this Thursday against the Raiders.  Baltimore, Chicago, Cincinnati, Detroit, Green Bay, Kansas City, Minnesota, and Seattle would remain.

This list could remain intact for a while as most of these teams are not known for wearing white jerseys at home too often. The most likely to do so would probably be Baltimore or maybe Cincinnati. The others, not so likely.

It's odd. Watching Cowboy games in Dallas, when the cameras pan the audience, I usually see a lot more navy jerseys than white. (I actually see the same thing viewing Dolphin home games, too, with their fans opting for the aqua jerseys. Look for it!) 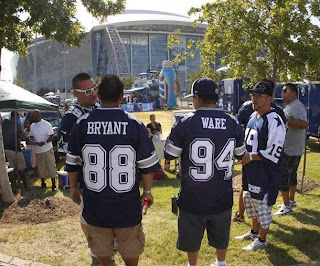 One thing is certain, if it happens, the uniform match-up Thursday afternoon will be a pairing never before seen in the history of regular or post-season NFL games.  Who knows. Maybe wearing these navy jerseys at home will bring the team luck and may start a trend of Dallas wearing them more often at home next year. One can only dream.

***UPDATE***
It seems I beat our Timmy B. to the punch as he was in the middle of organizing the same type of article. He passed on to me the following photo of the last time the Cowboys wore their regular blue jerseys for a home game...December 8, 1963, at the Cotton Bowl, against the Pittsburgh Steelers. 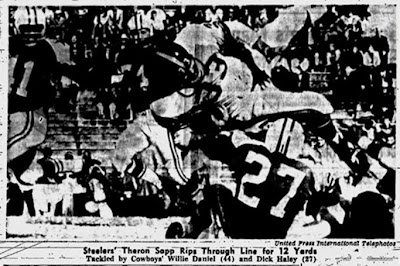