15)  Bills-Dolphins:  BUF in blue/white, MIA in white/white.  Try as they may, the Bills super blue and white combo can't save this one from a sleepy pairing.  Way too much white here; helmets, pants, and the rather whiteness of the Dolphins white jerseys with a heaping helping of white trim.  Whiteouts should take place in the stands, not on the field.

14)  Patriots-Jets:  NE in white/navy, NYJ in green/white.  Rivals in standard garb.  I think the Jets in all green would have scored style points somewhat.  While it's a good one, I'm not feeling it this week.

13)  Buccaneers-Falcons:  TB in white/pewter, ATL in red/white. Nothing much to see here.  Pewter, red, black, white and a hint of orange between the two of these guys.  I'm just a fan of the Falcons red, I have to admit,  while the Bucs have a fine look with the uniqueness of the pewter.  But combined, it doesn't resonate with me.

12)  Chargers-Jaguars:  SD in white/navy, JAX in teal/white.  Well then, for the first time this season, the Jaguars wear what once their signature color, teal.  And they have black numbers with them.  Up close, it's really a dynamite combination, but from a distance, somewhat muddled.  In a similar vein, I liked it when the Raiders would sport silver numbers on a white jersey or the Saints with gold digits on a white jersey, but for the fan or commentator high above the field, it really doesn't work.  Couple with the Chargers white over navy, it's really a different (in a good way) matchup...the Jags helmets?? Ummmmm

11)  Cowboys-Eagles:  DAL in white/mint, PHI in green/white.  There were days when the Eagles (and others) wore WAH on purpose just to make the Cowboys wear their "cursed" blues.  We really don't see that trick much anymore.  Be that as it may, this is still a pretty good pairing.  Greens, 50 shades of blue, a touch of silver and black.

10)  Texans-Chiefs:  HOU in white/navy, KC in red/white.  As you know, I moan constantly about the Texans dropping red socks in favor of the navy socks when worn with navy pants.  At last, this look works, especially when paired up against the Chiefs ever so traditional template.  One of the better matchups this week.

9)  Ravens-Steelers:  BAL in white/black, PIT in black/yellow.  Lately the Steelers have taken to wearing throwbacks against their hated rivals.  But the Steelers are saving their alts for a game against the Lions later this season.  Ravens work it right with the black pants complimenting the white jerseys, while the Steelers rock the dependable black and yellows. As  it should be.

8)  Broncos-Colts:  DEN in white/white, IND in blue/white.  A lot, I mean a LOT of blue and white. Just a sprig of orange kept a color monopoly at bay.  Really, not the best, but this is surprisingly a better than average matchup. Identities are strong here.

7)  49ers-Titans:  SF in white/gold, TEN in navy/white.  Been awhile since we saw the Titans in navy (2009?), and it does work against the somewhat minimal Niners combo.  It is a good bounce for one in white and navy with some columbia blue against one in gold and white with red accoutrements.  Well blended.

6)  Vikings-Giants:  MIN in white/purple, NYG in blue/gray.  Violet, blue, gray and dashes of yellow and red. Very eye appealing to me.  Nothing too strong here, but a really nice blend of colors, logos and whatnot.  One rather conservatively dressed, the other in a 2013 model of the Nike template. Lookin good.

5)  Seahawks-Cardinals:  SEA in gray/gray, ARZ in red/white.  Cardinals heading for a second straight season keeping the red pants in mothballs, but the Seahawks arrive in the all grays to put some zing into the matchup.  Technically this one does qualify as a color on color game and gray does work!  Plays well with the red and white of the Cardinals.


4)  Bears-Redskins:  CHI in white/navy, WSH in burgundy/yellow.  Close your eyes and it's 1940.  Washington, DC.  Navy and burgundy helmets.  White and burgundy jerseys.  Navy and yellow-gold pants.  And plenty of points on the board, except this time, the points were rather evenly divided as opposed to 1940, when the Bears had all of them.  Something to be said about the classic uniform matchups, then and now.

3)  Bengals-Lions:  CIN in white/white, DET in honolulu blue/silver.  Give the Bengals credit.  So far in 2013, they have worn orange socks for every game they've rocked the all whites.  Coupled with the Lions in sparkling honolulu blue and silver, and this reeks of sweetness.

2)  Rams-Panthers:  STL in white/white, CAR in carolina blue/silver.  Rams go all white so that the Panthers can sparkle and show off their wunderbar pale blue beauties.  Well, I don't think that's quite how it went down, but it does seem to fit.  Not that the Rams' whites are that dull, they do look good, but when the Panthers show off a look that should be their primary, it is noticed and noted. 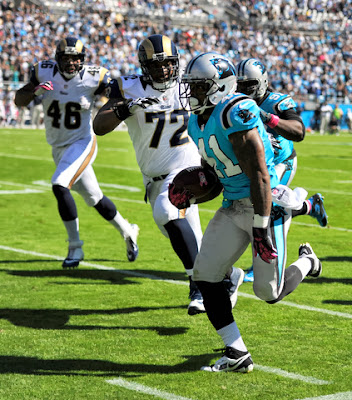 1)  Browns-Packers:  CLE in white/brown, GB in throwback navy/khaki.  Yo. This one kicks it.  Browns again with the infamous brown pants working against the Packers in solid yellow helmets (thanks to the NFL's new policy baning the use of more than one helmet per team) with the retro 1929 era jersey, complete with the yellow circle with number.  SIX different colors at work, brown, yellow, navy, white, khaki and orange.  Solid display of colors. 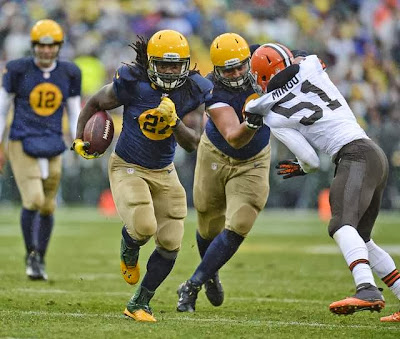 Back atcha next week.  See ya then!