#14. Jets-Rams: NYJ in all white, STL in all blue. Unlike the JAX-HOU where I found mono a mono refreshing, I find this one repulsing. Maybe it's because I KNOW this one could have been so much better, had the Jets worn green pants and the Rams checked in with white pants. But no. Like the Cardinals, the Jets are keeping their dark pants on the shelves. And the Rams, well, we have yet to see them in the blue/white look for 2012. Sad.

#13. Saints-Raiders: NO in white/black, OAK in black/silver. We know what the Raiders would wear, what would the Saints go with? Gold pants, to make this an Alloy Bowl, full of silver and gold, or black pants, to create a bit of a Coal Bowl, with loads of black. The call to coal was heeded. As a result, a little to black for my taste.

#12. Chargers-Broncos: SD in white/navy, DEN in alternate all navy. The old normal is now the new alternate. Broncos, by making the dark blues a rarity, make this look even better. Just one problem, wearing this against the Chargers makes this matchup too blue. So, it's a bit of a wash.

#11. Jaguars-Texans: JAX in all white, HOU in all dark blue. Jaguars go back to an all white look and after a steady diet of black, a little relief. And the Texans rocking a mono dark blue. While I moaned long and hard about all of the mono unis last week, this one works. Perhaps it's the rare dar-dark look of the Texans, but I do find this an appealing matchup.

#10. Buccaneers-Panthers: TB in white/pewter, CAR in black/silver. After all of the justifiable buzz last week of the Panthers in all black + shocking blue socks, Carolina returns to normal with the black and silver pants and black socks. Bucs still add metallic joy with the pewter pants. It's still a fine get together.

#9. Cardinals-Falcons: ARZ in all white, ATL in red/white. Not one of the better ones. True, the Falcons in their superior reds, but again the Cardinals preference to keep the red pants tucked away in the closet is diappointing. Black is used nicely. Understated and not overwheleming.

#8. Colts-Patriots: IND in all white, NE in navy/silver. This one hearkened back to the peak of this matchup, the 2000's. Championships on the line, Manning vs. Brady, Belichick vs. Dungy/Caldwell, etc. And I guess because of that, I give this a little bit of better grade than maybe it deserves.

#7. Packers-Lions: GB in white/yellow, DET in honolulu blue/silver. Tried and true, whether at Tiger Stadium, the Silverdome or Ford Field, you know what you're getting here. Choice colors in yellow, green, silver and that honolulu shade of blue, with a pinch of black. Nothing flashy, nothing dull. Just a steady infusion of nice colors.

#6. Bengals-Chiefs: CIN in white/black, KC in red/white. This is one of the better ones. As bad as the Chiefs all white look is, that's how sweet their red & white is. Coupled with the Bengals in the orange lids, white shirts and black slacks, this one's above the ho-hum line.

#5. Bears-49ers: CHI in white/navy, SF in red/gold. More of the old guard showing off some good colors. And there's a plentiful amount of them. Navy, scarlet, gold, orange. They blend well, too. Certainly an upper tier matchup.

#4. Eagles-Redskins: PHI in white/green, WSH in burgundy/white. For just the second time, the Skins put away their yellow pants and revive their white pants. Normally I'd decry this switch, but coupled with the Eagles purty white and green scene, this is a plus. So, I happen to like this rather traditional matchup.

#2. Ravens-Steelers: BAL in white/black, PIT in throwback black-yellow stripes/khaki. Steelers decide to give the wacky prisoner throwbacks a more national view for Sunday night and against their bitter rivals, the Ravens. As with the Redskins game several weeks ago, the - um - buzz about the bumblebees overwhelm whatever the Ravens wore, which actually, was the right combo. If nothing else, the Steelers jerseys bring about lots of attention to our passion, uniforms. And that, my GUD friends, can't be all bad!

#1. Dolphins-Bills: MIA in aqua/white, BUF in white/blue. Rarities spill over in this game, and it is very much for the best. With the Bills going white at home (WAH), the Dolphins have to break out the aqua tops. Aqua is such a unique color, yet the Fins lately seem to avoid it like the plague. With the Bills rocking the blue pants, the eye appeal is wonderful. For some reason, the Fins aqua jerseys came across on my HDTV like sea green. Yet, photos from the game indicate the Dolphins wore a normal aqua color. Whatever, a great uni matchup. 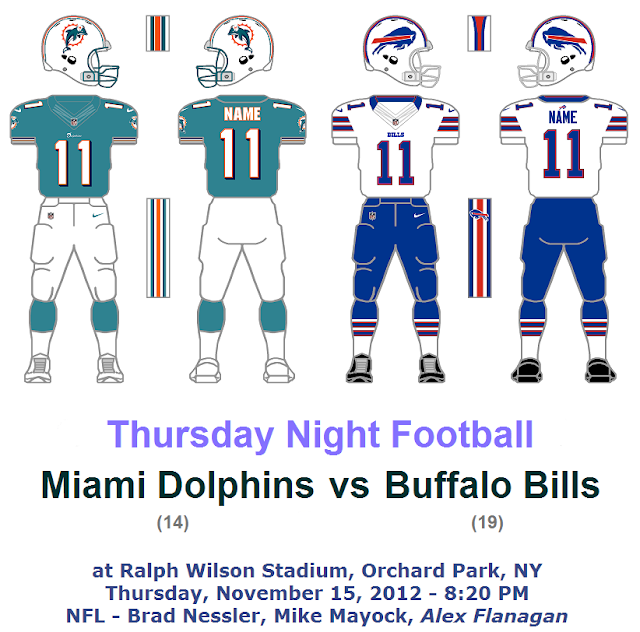 Did we get to see the best looking uniform combinations possible for the year's final games?

You make the decision as we continue to travel through history. 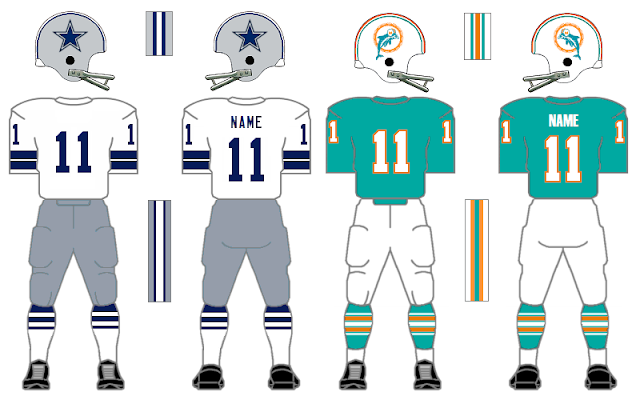 ACTUAL: Given that Miami predominantly wore white at home, there is a distinct possibility that, when given the choice, they may have selected their mono-white duds. ALL HAIL THE SILLY DARK JERSEY RULE (with tongue planted firmly in cheek)!  Unlike the previous year when the rule messed up the uniform pairings, the rule worked like a charm here. 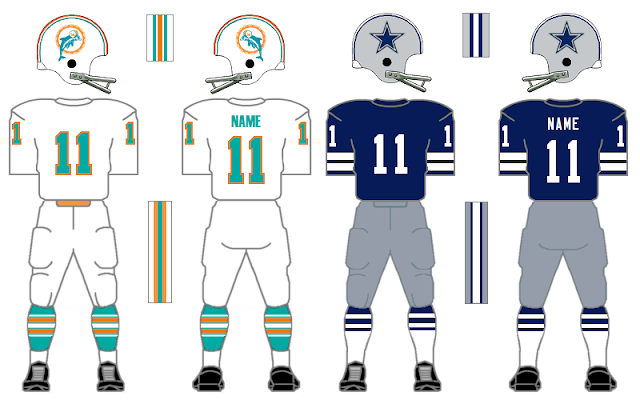 ALTERNATE: Whether Dallas had been the home team (and subject again to the SILLY DARK JERSEY RULE) or had Miami been allowed to go mono-white, this is what we would have been treated to. Is it possible to count this year as two victories for ACTUAL instead of just one???
EDGE: ACTUAL 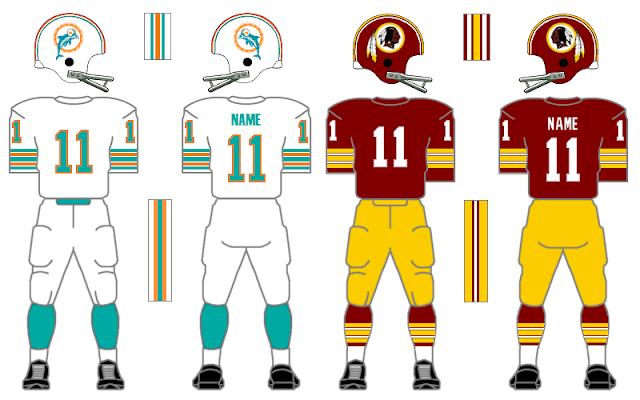 ACTUAL: Is it wrong to not be bothered by Miami's mono-whites here simply because they were the visiting team and had to wear them instead of choosing to? 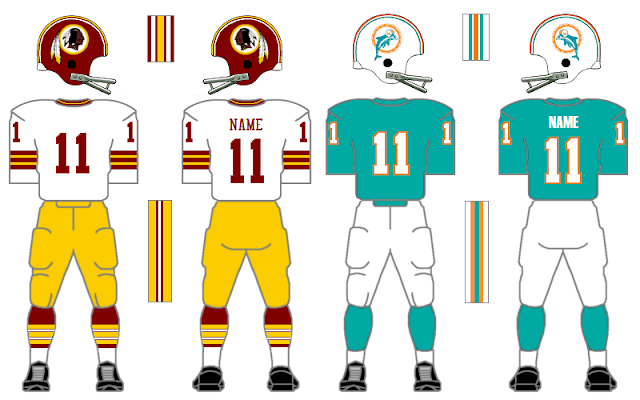 ALTERNATE: Is it just me or is the idea of aqua and yellow together like this as offensive to the senses as actually having to look at it?
EDGE: ACTUAL 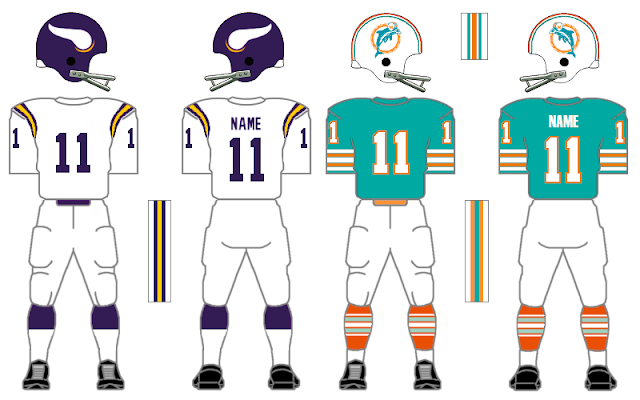 ACTUAL: I really would pick this one. Really. If not for one thing...those orange socks. Bad. Especially bad when worn in conjunction with the aqua jersey. 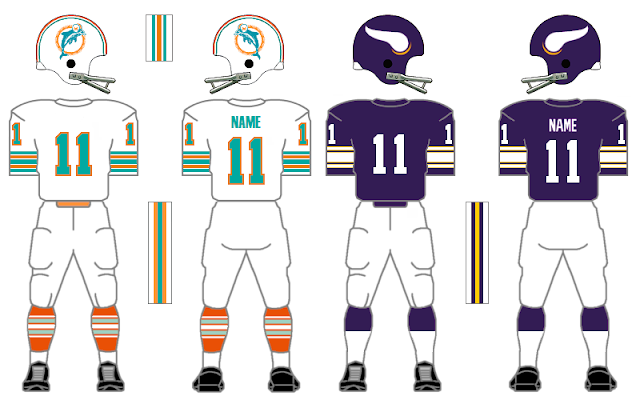 ALTERNATE: Still bad. Just not as bad. Either way, we get a team in mono-white so its a wash in that regard.
EDGE: ALTERNATE 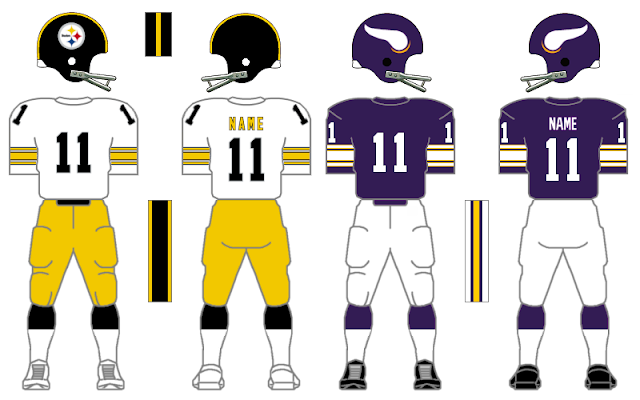 ACTUAL: Was Pittsburgh the first team to truly wear predominantly white shoes in this game (Not counting L.C. Greenwood, of course)? 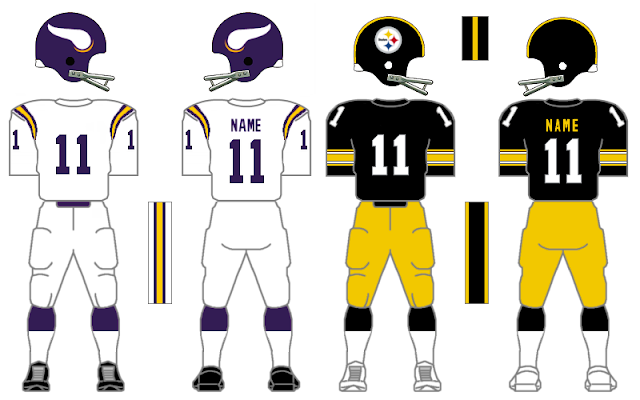 ALTERNATE: This pairing lacks the split-up of color that the ACTUAL possesses.
EDGE: ACTUAL 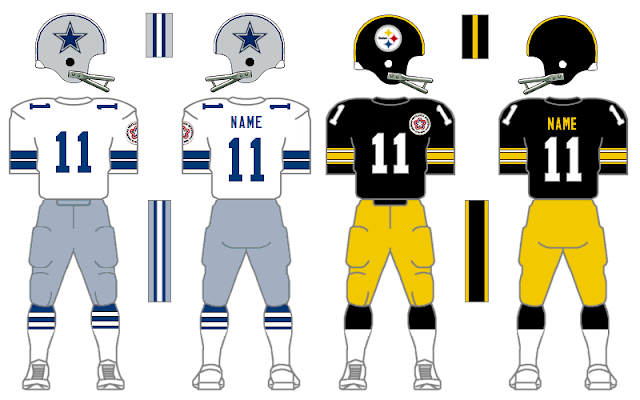 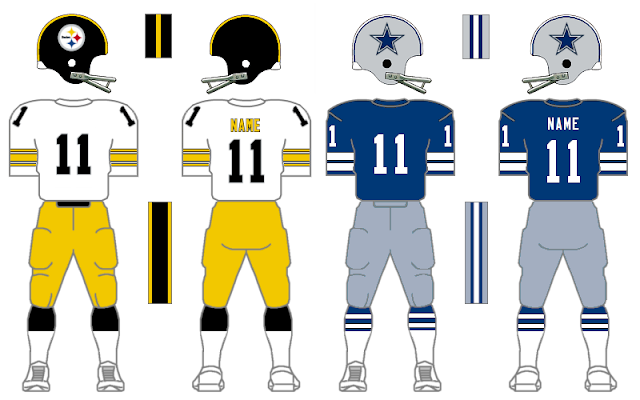 ALTERNATE: Never gonna happen. Never. Might have been nice to see in a Preseason game, maybe. But definitely not on this stage.
EDGE: ACTUAL


With a 4-1 near sweep, ACTUAL comes very close to taking all five of these years and goes up by a count of ACTUAL - 6, ALTERNATE - 4.

Don't forget to vote for your selections and come back next week for 11-15.
Bill Schaefer