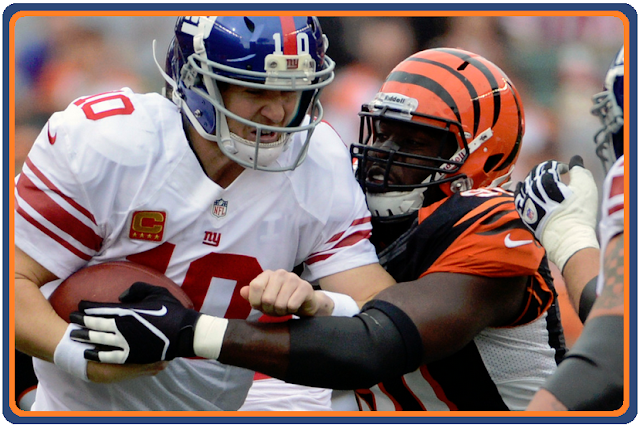 One word for this week's pairings: Bor-ing.

We had a total of 12 teams in the monochrome look. Four in an all-dark look and an amazing eight teams wearing all whites. It made for a rather disappointing week of uniform pairings. Anyway, let's get on with the review.

#14. Colts-Jaguars: IND in all white, JAX in all black. If you are old like me, you might recall a big hit that the band Three Dog Night had in 1972 with "Black & White." Very similar scenario here. Indy in white helmets, white jerseys, white pants. At least they wore blue socks. For the Jags, it was black from head to toe. A yawner.

#13. Falcons-Saints: ATL in all white, NO in all black. The Falcons in the all white, which I do not find anywhere near as appealing as the sweet red jerseys, and the Saints, in a look I normally prefer, the all blacks, but not this week. The gold pants would have helped a lot in what turned out to be a rather dismal week, uni-wise.

#12. Chiefs-Steelers: KC in all white, PIT in black/yellow. Hoping against hope that the Chiefs would buck the all white trend for the week and stay with the brilliant white/red combo. But alas, the white conspiracy continued with the Chiefs - wearing my least favorite all white combo of all - against the Steeler standard of black/yellow. Ugh. Chiefs, if you're going to go all white, at least wear your handsome red socks! This is just too much vanilla for my taste. Steelers, what can I say?

#11. Bills-Patriots: BUF in all white, NE in navy/silver. Not sure if I would have preferred the Bills in blue pants or not. With all of the other all white combos, I do think the blue pants would have been, all right! Pats in the normal navy/silver combo. That saved the day.

#10. Titans-Dolphins: TEN in lightblue/dark blue, MIA in all white. Loads of shades of blue present here, with the columbia and navy blues of the Titans and the aqua tones of the Dolphins. A healthy present of white as well with the helmets and all of that Dolphin white. I'll take it, but not by much. 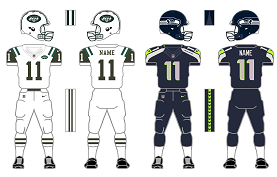 #9. Jets-Seahawks: NYJ in all white, SEA in all navy. Yeah, the honeymoon with the Seahawks new threads comes to an end. The all white and all dark, one of four games in a similar matchup, just takes its toll on me this week. Would have been great if the Jets had rocked their green pants and/or the Seahawks had trotted the new gray pants. Oh well.

#8. Rams-49ers: STL in all white, SF in red/gold. Yet another all white look, but saved by the Niners in their bright scarlet red and gold. Here's one game where the blue pants would have jumped the ranking a notch or more, but the blue and gold act as a good compliment to those brilliant reds. No matching ties with this encounter. 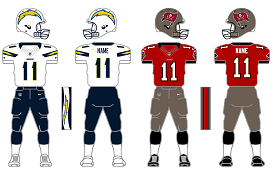 #5. Chargers-Buccaneers:. SD in white/navy, TB in red/pewter. The Bucs get away from the early season WAH's and settle into the cozy red and pewter homes. Chargers add the compliment with the white jersey-navy pants combo. A pleasant sight to the eyes.

#4. Cowboys-Eagles: DAL in white/mint, PHI in green/white. Familiar teams, familiar unis. And compared with the rest of the NFL matchups this week, familiar is good. Very good. Contrasting jersey/pants combo makes for a soothing Sunday night.

#3. Lions-Vikings: DET in white/silver, MIN in purple/white. Normally a rather routine matchup. But in a week of white-white and dark-dark, this is an above the fray type of matchup. Good colors, good trim. honolulu blue, silver, purple, hints of black and yellow. Score one for the old guard. 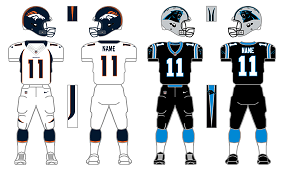 #2. Broncos-Panthers: DEN in all white, CAR in all black. Oh Lord, another all white against all bla....wait a minute! What??? The Panthers rocking ALL BLACK? What?? They also are wearing the carolina blue socks??? Never before! Yay-yuh!! I grant this game a massive pardon and bestow blessings on this matchup. I think this one caught everyone off guard, because the Panthers rarely go outside of the box. But in a week of monotone, this one sticks out like a sore, nay two sore thumbs. And both thumbs point skyward in approval. 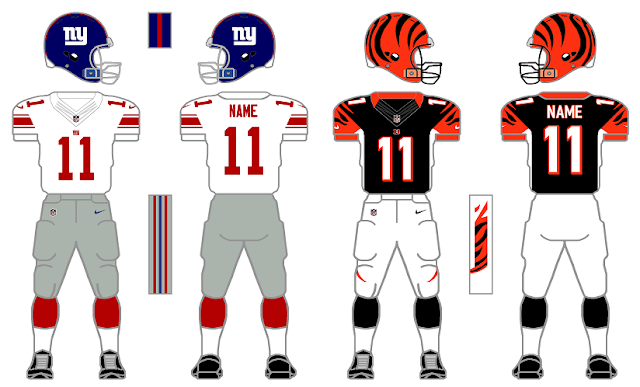 OK fans, Hopefully my uniform grouchiness will fade with the Week 11 matchups! Guys, all I'm asking for is a little bit more color!

When I was younger, many moons before I became involved in the creation of the GUD, I used to enjoy the build up before Super Sunday. (Now I know better!)

Being young, and not knowing there was a pattern that existed in its determination, I used to wait with increased fervor to catch that first glimpse of a jersey. I wanted to find out if the picture I'd created in my mind's eye of what this year's big game was going to look like was right or wrong.

Was what I'd hoped for going to be correct or was I going to be disappointed in what I was going to watch?

When Tim, Rob, and I were first organizing this site and we'd determined that we'd include a semi-periodic blog, I set out to brain-storm a few topics that I would enjoy reading/seeing.

To be honest, after doing some uniform tweak concepts and the "If Now Was Then" concepts, this current series was one the first ideas I actually had...namely, "Did We Get the Best Looking Game" from a uniform point of view?

Over the remainder of the season, I will be illustrating five games each week - what they looked like AND what they could have looked like.  I will include my stance and preference as well as give you, the viewer, the opportunity to cast your vote for each year's game for the ACTUAL combo or the ALTERNATE combo.

While the ACTUAL combos will accurately depict any patches worn during the game, the ALTERNATES I've put together will not be sporting those patches.

We'll show you each Super Bowl ACTUAL and ALTERNATE combos and then give you a chance to vote for which one you like better, and we can determine once and for all if they "got the right matchup."  Let's start at the beginning... 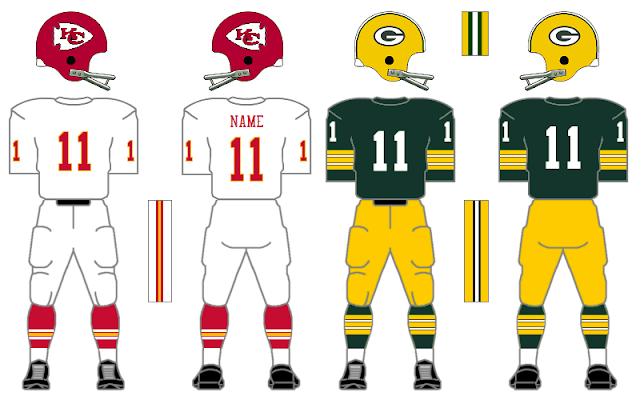 ACTUAL - This was the game we saw in 1966. As the established league, the NFL was awarded 'home team' status and wore their typical green over yellow combination. Kansas City would not break up their mono-white road apparel for another two seasons. 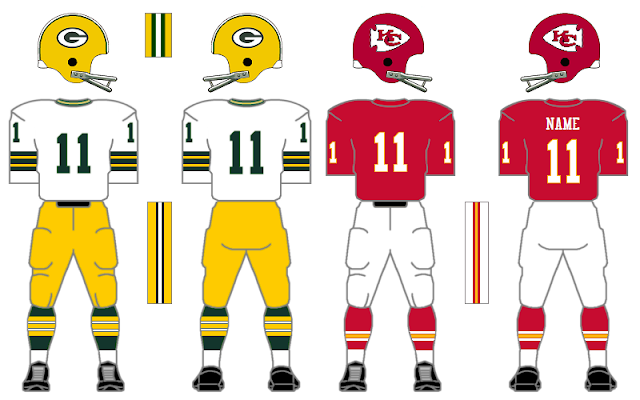 ALTERNATE - However, what if the NFL had allowed the AFL to be the home team? True, there would have been a lack of the green but having the white jersey for Green Bay and the white pants of the Chiefs balances the whites out a little better.
EDGE: ALTERNATE 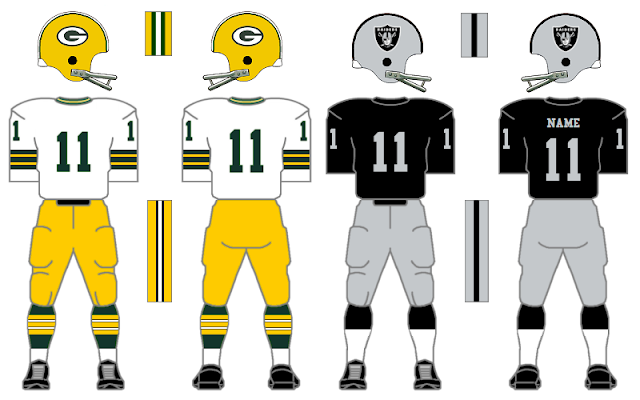 ACTUAL: A Silver and Black debut. Although they probably wish to forget their performance, I just can't picture the Raiders debuting in the title game without their black jersey combo. 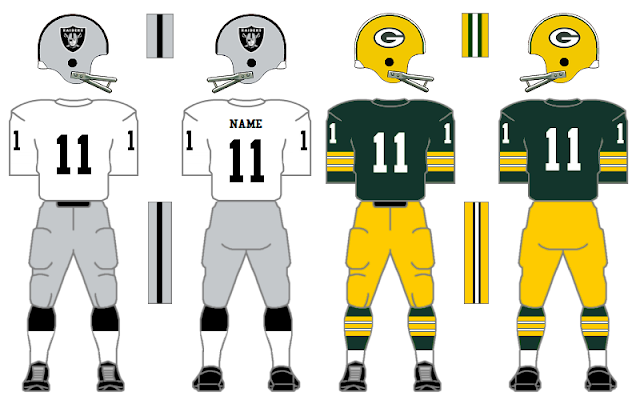 ALTERNATE: By itself, this combination would not be bad. However, compared to the opposite combination that we did get for this game, it finishes in second place.
EDGE: ACTUAL 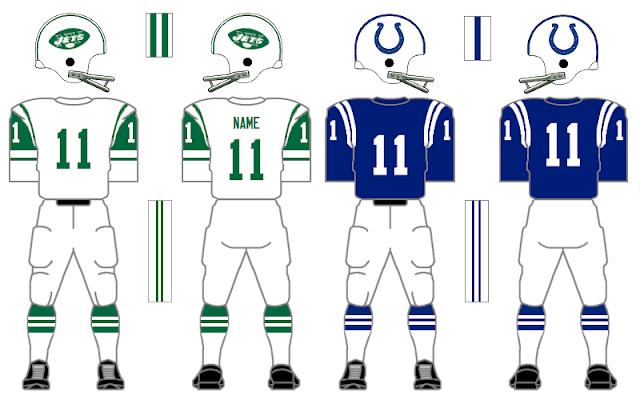 ACTUAL: Not much to go on between the two choices here as both teams feature mono-white road combos. This combo takes a marginal lead due to the Jets' road jerseys having more green on the sleeves than the Colts' have blue on their road jerseys. 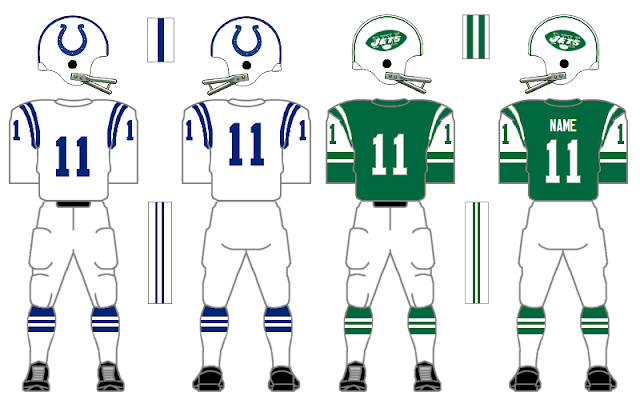 ALTERNATE: The Colts' road combo just doesn't have as much color to play off of the Jets' green. There's just too much white here.
EDGE: ACTUAL 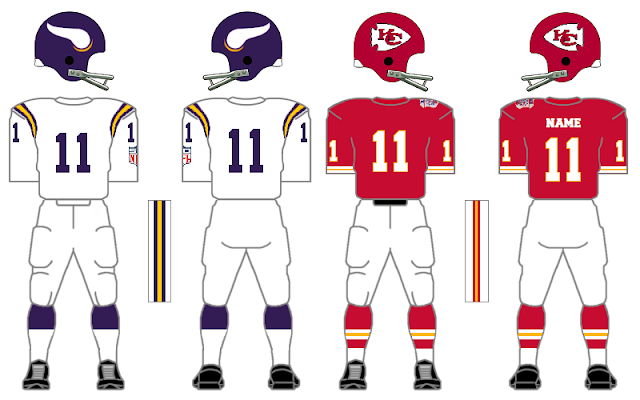 ACTUAL: Like the alternate for the game two years earlier, by itself, this pairing is not bad. 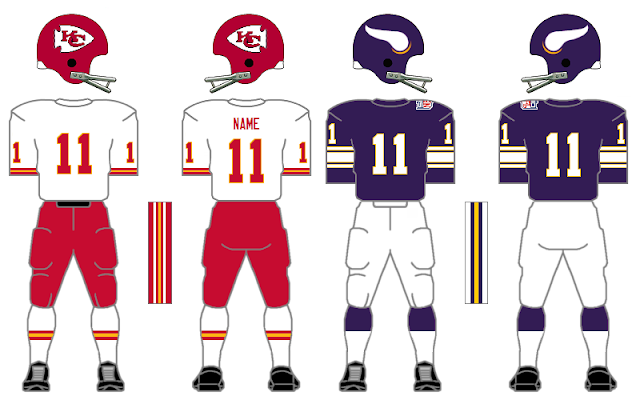 ALTERNATE: However, compared to the alternate pairing here, the addition of the red pants would clearly have put this combo over the top.
EDGE: ALTERNATE 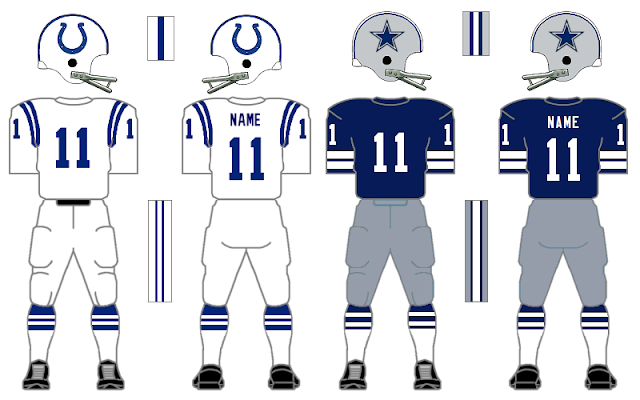 ACTUAL: The fact that the NFL had a rule that said a team's color jersey was there de facto home jersey seems a bit silly. The silly like Earl Bennett getting fined for "wearing 1-color cleats when the color in question is, in fact, a team color" kind of silly. In hindsight, I'm kinda glad we got to see this pairing. We'd never get to see this combo pairing today as the Colts wear blue at home and the Cowboys still prefer their whites. 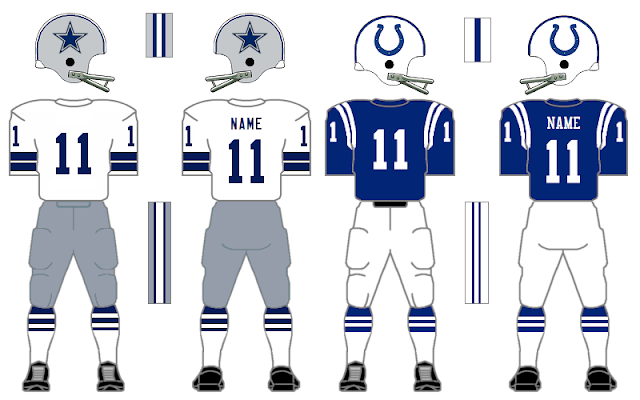 ALTERNATE: Had the Colts been the home team, this would have been the pairing we'd have seen. Pretty good look, if I do say so myself. Especially considering that the Cowboys' blues and silvers actually matched - once upon a time!
EDGE: ALTERNATE