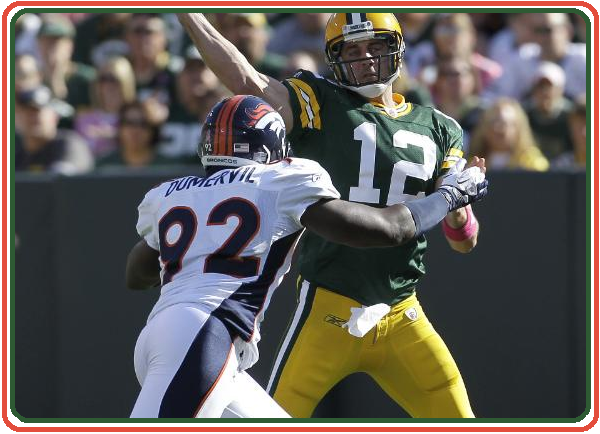 Week 4 Uniform Rankings
by Tim Brulia
Week 4 ushers in the NFL campaign for "Breast Cancer Awareness Month." As like last year, the NFL is busting out October with pink accessories. Everywhere. Pink ribbons, pink sweatbands, pink do-rags, pink trimmed sideline gear, pink goal post pads, etc.  But as mentioned before, these are accessories, and not part of the uniforms. So with that, you won't see pink on the Gridiron Uniform Database. Please take note that the Gridiron Uniform Database supports the fight against breast cancer and ALL cancers. We encourage you to contribute to the American Cancer Society (or, if you're not in the US, your country's cancer fund).

OK, now to what we know best, football uniforms. Here's my take on Week 4's uni matchups, in order as they appear on the Gridiron Uniform Database:
Lions-Cowboys: No major stories here, but there's a lot of blue and silver at play here, in various shades. If you like these two colors, you'd have loved this match up of the two perennial Turkey Day hosts.

Panthers-Bears: This is the first of an amazing 9 matchups this week which feature a team in white jersey/white pants. The Bears return to their traditional home navys for their look. It's not a bad look for these two, but it doesn't exactly get me pumped either.
Bills-Bengals: Bills in all white is becoming a little duller look the more I see it...from a distance. Close up though, the Bills whites look more appealing to me. The Bengals, in the black jersey and white pants combo, look more, um "traditional." This works, as red, blue, black and orange are all here. And LOTS of white.
Titans-Browns: Browns keeping the White at Home (WAH) going. The Titans wear one of my favorite combos, the light (or columbia) blue jersey with navy pants. I really liked how this match up plays out. Better than even I expected.

Vikings-Chiefs: Shoot me if you must, but I happen to like the Vikes unis. I like how the purple matches up. I like the funky purple sides with a dash of yellow trim. I like the norseman logo on the nape of the neck. And the Chiefs in the ripe red jerseys. This is a matchup that works for me.
Redskins-Rams: The 'Skins decide to pull out the Gibbs-era (though I think Jack Pardee was actually coach when these duds debuted) burgundy pants with the white jersey and the white socks after wearing the yellow pants the first three weeks. Meanwhile the Rams wear their fourth combo in four weeks (blue/blue, white/white, blue/gold) with a blue/white look. The gold pants might have made this one of the better uni matchups this week, but this combo sorta sends me back to the Rams' blue and white days of my youth. I like this one.
Saints-Jaguars: Saints back to normal and the Jags again breaking out the all white for a home game. Too much white for the Jags? Oh, how their teal jerseys would have made this one so much better, regardless of what color pants the Saints would have worn. Disappointing matchup from my eyes.
Steelers-Texans: A better than average matchup, with the Steelers in their underrated (my opinion) whites against the Texans in the deep blue. A decent amount of color variance, not too much white. I like that.
49ers-Eagles: Eagles, I guess, going dark at home (DAH) for the entire season, which - according to our records - hasn't happened since 2002 and that was the only time since the early 80's! Going against the white, gold and red trimmed 49ers, makes for a pretty good matchup.

Giants-Cardinals: First off, a rant (Rant on): When the Big Red introduced a black alternate jersey, there were howls of black for black's sake (BFBS in the uni geek cult) on the Cardinals part. Fact is, I don't buy it. Black has been a part of the Cardinals palette since 1964, (excluding 1996-2004), so I have not a problem with it (Rant off). And in fact, with the red trimmed Giants as the enemy, I actually prefer the black jersey to the red for this encounter. More colors, makes the Giants red trim a little more vibrant. It works.
Falcons-Seahawks: Meh. Falcons in white/white, Seahawks in blue/blue. Would kinda like to see the Seahawks break out those dark blue pants they wore in 2009. Dull.

Dolphins-Chargers: Couple of oddities at play here. Dolphins wearing the aqua tops for the third time in four games and the Chargers, playing their third home game out of four games, have worn white jerseys for all four games so far. In spite of all the white helmets, the colors sorta work. It's the first time the Bolts have gone WAH for at least three home games since 2002.

Patriots-Raiders: The Patriots add a little pizzaz to this matchup. A fair amount of silver, but the Pats navy pants make this game work. Something about last week's matchup with the Jets didn't seem to make the Raiders get-up appealing. But this one with the Pats does. Don't ask why!

Broncos-Packers: The Pack in green just gives me warm and fuzzies. Can't explain it. The Broncos in all white would normally not do much for me, but the greens, yellows, blues and oranges are a nice color combination.

Jets-Ravens: "The ink is black, the page is white..." Three Dog Night, 1972. Sorry for the Chris Berman moment folks, but I don't think you can get much more 180 degrees than this matchup. Jets in the w/w/w/w look and the Ravens in the b/b/b/b look. Breaking this head to toe black out for the night game is perfect for the Ravens. Because of the extremes, this works rather nicely from my perspective.

Colts-Buccaneers: With the white helmet/white jersey/white pants and solid blue socks, the Colts are the NFL's version of Penn State's ueber generic uniforms. The Bucs decided to go with the red jerseys for their prime time appearance and it is a great look. The night game gives the pewter pants a rather charcoal-like look that rocks. The Bucs carry this matchup to a high level.

So as of this moment, this is how we rank the Week 4 uniform matchups head to head: