A little more back to normal this week? Let's find out, shall we?

16)  Chargers-Titans:  SD in navy/white, TEN in white/navy.  Too much similarity here.  White helmets, navy socks for both and flip-flops on the jersey-pants combos.  Blah.  Titans definitely should have rocked the columbia blue pants, so we'd at least have a varying tint of blue.  Not one of my upper echelon choices. 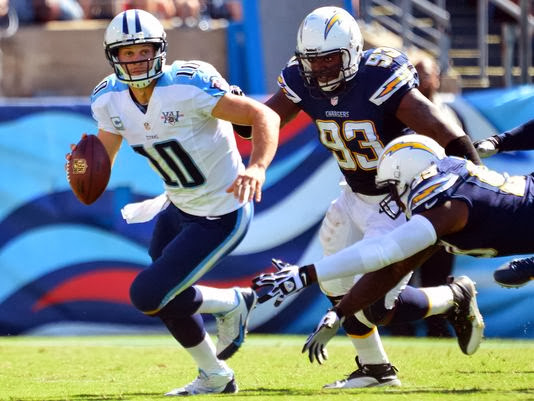 15)  Buccaneers-Patriots:  TB in white/pewter, NE in navy/silver.  Man I'm just not feeling anything more than C+ for this one.  These aren't bad unis, I like them both.  But when there are matched up, it just misses the boat for me.  2 + 2 = 3 here, or something like that.

14)  Falcons-Dolphins:  ATL in red/white, MIA in white/white.  Falcons have all the zip and zing here, Dolphins have all of the white.  I do like a lot of the elements in the new Miami unis, but that's the aqua's.  A team that I think should wear the aqua's much more often than they do.  Besides if the Fins are worried about wearing "dark" in the tropical South Florida sun, aqua is perhaps the lightest "dark" colored jersey that any of the 32 NFL teams wear.  So thanks, Falcons.  You alone keep this game from the deep dark cave of the GUD's rankings.

13)  Cardinals-Saints:  ARZ in red/white, NO in white/faded gold.  Saints in normal early season WAH (white at home).  Would probably have been better for the Saints in at least black tops, but this forces the Big Red in red jerseys.  This is not a bad matchup, but there could have been some better choices here.

12)  Giants-Panthers:  NYG in blue/gray, CAR in white/white.  I know it's standard operating procedure (SOP) for the Panthers to go WAH early in the season, but gee, I really think this would have been a great time to see the carolina blue alternates.  But, the Giant blues are always a good sight.  A good - but not great - matchup.

11)  Jaguars-Seahawks:  JAX in white/white, SEA in navy/navy.  Welcome to Nike Bowl I!  These are the two sets of unis where Nike has taken the most liberty with design changes and twerks, er, tweaks (Sorry, Miley Cyrus).  Anyway, both teams are certainly both with distinctive looks, with the wild array of shapes, bright green trim and helmets that transition from matte black to gold right before your very eyes.  Very intriguing, but at the end of the day, probably middle of the road as far as the rankings go.

10)  Bills-Jets:  BUF in white/blue, NYJ in green/white.  Bills rock the billy blue pants and it works so much better with the white jerseys than the white pants.  Jets in standard green jersey - white pants ensemble, and even though both sport white lids, these sets of unis mesh quite well together.

9)  Rams-Cowboys:  STL in dark blue/dark blue, DAL in white/mint.  Thinking the Rams did right by going with all dark blue in this one.  Makes a stark contrast to the typical WAH wearing Cowboys.  As such, it earns Timmy B's brownie (blueie???) points.

8)  Raiders-Broncos:  OAK in white/silver, DEN in orange/white.  Traditional foes with traditional colors.  For the Broncos, switching back to orange as the primary jersey was such a good move.  Makes this game stand out so much more than if the Broncos would have worn navy.  Actually enhances the rather generic white jerseyed Raider look.

7)  Texans-Ravens:  HOU in white/dark blue, BAL in purple/white.  Both teams in standard wear, and this works very well. One team in dark pants, one in white bottoms.  Not much more to add, other than a very good contemporary look.

6)  Colts-49ers:  IND in white/white, SF in red/gold.  Is there something wrong with me?  For the first two weeks, I moaned about how dull the Colts look is with me.  Yet this week, for some reason, I think the Colts' duds bounce quite nicely off the Niners home set of bright scarlet and gold.  Must be the Northern California sun hitting the Colts blue trim at the perfect angle.  This one is on the money.

5)  Browns-Vikings:  CLE in white/white, MIN in purple/white.  First official outing for the Vikes new purple jerseys, and while these jerseys say "football jersey" than the previous ones, there are touches (flair tipped numbers, and sleeve stripes) that scream "2013" as well as "1963." The purple seems more vivid that ever and paired up with the standard Browns' orange and brown, the matchup has a lively feel to it.


4)  Chiefs-Eagles:  KC in white/red, PHI in green/white.  After the stunning shock of the Chiefs in all fire-engine red last week, we see KC sporting a more standard white jersey with the red pants.  Eagles go dark for the Thursday nighter, with the green jerseys.  A Chirstmassy matchup with the reds and greens, but it's as sweet as sugar cookies (with Chief red and Eagle green sprinkles, of course).

3)  Bears-Steelers:  CHI in white/navy, PIT in black/yellow.  I do like this one.  Paired against the coal black lids of the Steelers, the navy hued helmets of the Bears seem to jump a bit on front of my weak eyes.  Orange and yellow trims seem to sparkle a little more under Edison's lamplights.

1)  Packers-Bengals:  GB in white/yellow, CIN in alternate orange/white.  Bright sunny colors at work here, with a lot of orange and a lot of yellow.  I think the Bengals wearing black pants would have added a jolt of darkness to offset all of the brightness.  Still, this one has it made in the shade. 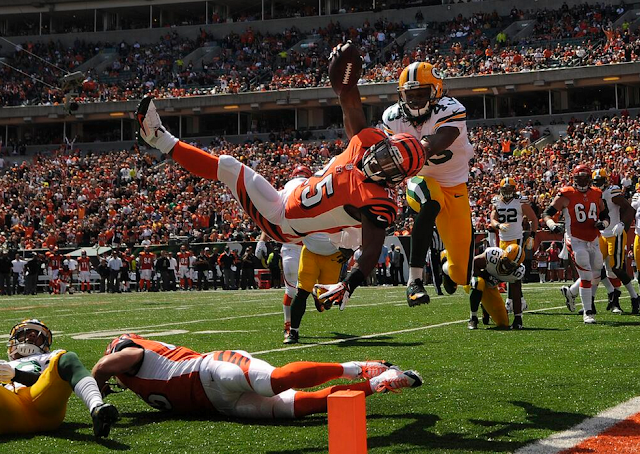