Hi-Ho! Timmy B back atcha for another season of the vitally important and historically significant weekly uniform rankings! By the way, my opinions do not in any way reflect the opinions of my partners in crime, Rob Holecko or Bill Schaefer, or anyone else involved with the GUD.

73,358) Vikings-49ers: MIN in white/white, SF in black/black. OK, first, the Vikes. Nice helmet, wish you would have worn the purple pants. Now, the Niners. I don't know if I've been more disappointed with a uniform than this. All black is so tired. All black with red NOB's and numbers and NO trim is terrible. An eyesore, nearly impossible to see the numbers from the scrimmage TV cameras. Identification is the key element in a football jersey. This is why you have huge honking numbers on the front and back. gold or white outlines on the numbers would have been a monster plus. At least the Nike logo was in gold. The pants? Pointless. I would have kept the gold pants here. 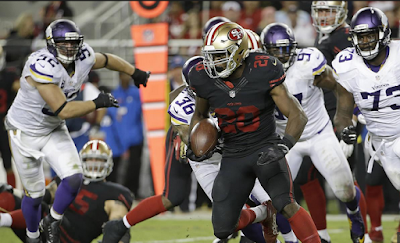 15) Seahawks-Rams: SEA in white/navy, STL in navy/navy. A little more gray on the Seahawks would have been a big improvement on this navy laden lineup. Or perhaps, the Rams in white pants. One and/or the other would have been a help here.

14) Browns-Jets: CLE in brown/orange, NYJ in white/green. Wow. What color! Now, who's carrying the ball for the Browns? Can't tell? Join the club! Twice before in Browns history (1946 and 1984), the Browns decided to wear orange numbers on brown jerseys, with at least at least a full white outline. Twice before those very seasons ended, the Browns ended up switching to white numbers because fans and media alike complaining that they couldn't see the numbers. It appears that history may be repeating itself. On top of that, the Browns made a surprising decision to wear orange socks with the brown/orange combo, which really looked out of place. But at least it was different. Oh, the Jets? They wore the white over green combo. But the green seems to be more olive drab than ever. Still, preferred to the all white-whitey-white-white combo. One of the more bizarre matchups that I've ever seen. 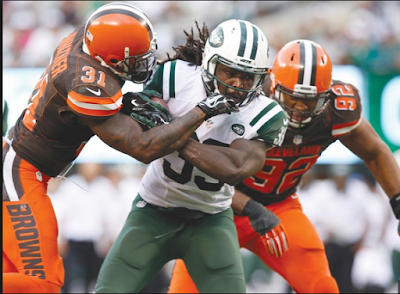 13) Dolphins-Redskins: MIA in white/white, WSH in burgundy/yellow. A Redskin WAH (white at home) combo would have forced aqua tops on the Dolphins, which would have created a way more colorful matchup. But alas, it appears that the Dolphins will yet again play in all white this season. Disappointing. But the Redskins in burgundy does save the day. Sorta.

12) Eagles-Falcons: PHI in white/white, ATL in red/white. Man, if the Eagles had rocked the green pants here, this matchup could have medaled. But the Birds stay close to the vest with the all white look. Falcons, whose red uni seems so much better than their white ones, perk this matchup in a spunky way.

11) Titans-Buccaneers: TEN in navy/white, TB in white/white. Would have kinda liked the Bucs to go with pewter pants and red socks. Would have made for a lively matchup. But, they go with their most "conservative" look again a navy over white Titan team. The result is eye pleasing if not eye candy.

10) Saints-Cardinals: NO in white/gold, ARZ in red/white. I guess as the season progresses, the Saints will eventually break out the black pants and the Cardinals will unleash the red pants. But not today. Not saying both in dark trousers, but at least one in dark bottoms would have brought this game up the list a few notches.

9) Colts-Bills: IND in blue/white, BUF in throwback white/white. Bills coach Rex Ryan digs the WAH look early in the season. The Bills cooperated by wearing the not quite exact throwback to celebrate the 1964-65 AFL Championship team. From this end, the Bills could've done better with the blue throwbacks from this era. It was an OK matchup, but not the best. 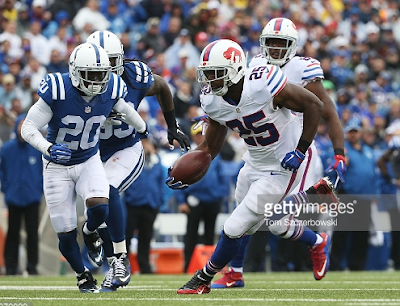 8) Ravens-Broncos: BAL in white/black, DEN in orange/white. The Ravens do the right thing in wearing the black pants. And while the Broncos orange continues to groove my eyes, I just can't evoke a pure thrill here. Maybe sometime soon, the Ravens need to expose the purple a bit more.

7) Giants-Cowboys: NYG in blue/gray, DAL in white/mint. A very, very familiar look for these twice yearly opponents. Does it get boring? Every now and then, sure. But this week, the comfort of familiarity is soothing. Just that breath of Giants red makes it worth the mundane.

6) Chiefs-Texans: KC in red/white, HOU in white/white. The Texans are making a tradition of starting the home season in white over white, then going to the more normal white and navy contrasts. The Chiefs brilliant red jerseys add some needed color to the proceedings.

5) Bengals-Raiders: CIN in white/white, OAK in black/silver. Bengals do well to go with orange socks instead of black and make orange a great off-set color against the standard black over silver of the Raiders. The result of this little maneuver is a fairly appealing matchup.

4) Packers-Bears: GB in white/yellow, CHI in throwback navy/white. The Bears do like this throwback, and they should. It's about as accurate as it gets (save for the NOB and modern sleeve cut). Bouncing off the reliable Packer togs, the twosomes pair up nicely.

3) Lions-Chargers: Like the Texans, the Chargers seem to be making this all in white opener their little new tradition. And against the Lions in their prominent honolulu blue and silver, it works. Navy trim, yellow and powder blue bolts and navy socks compliment this matchup better than one would expect. One bit of disappointment, the Lions using the William Clay Ford s a permanent memorial, 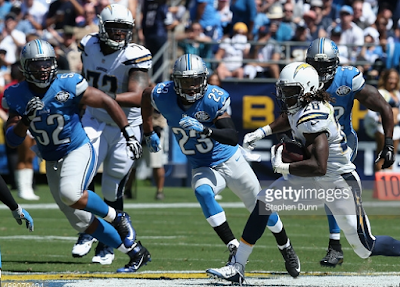 2) Steelers-Patriots: PIT in white/yellow, NE in navy/silver. The kickoff to the 2015 featured familiar hue that do contrast nicely. Black, white, yellow, navy and a glint of red. Sharp, though predictable. Included was a commemorative championship patch for the Pats and it was a plus. 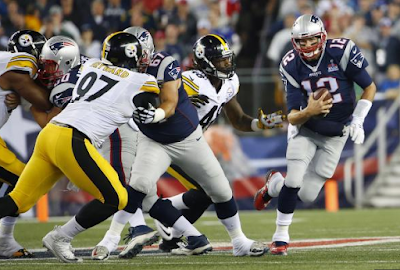 1) Panthers-Jaguars: CAR in carolina blue/silver, JAX in white/white. This has surprising eye appeal for me. I've always loved the light blue Panther jerseys and have thought these should be the main dark jersey for them. And for some reason the Jaguars helmet with gold on back and matte black on front works well here. Glad they kept the black slacks in the shelves. 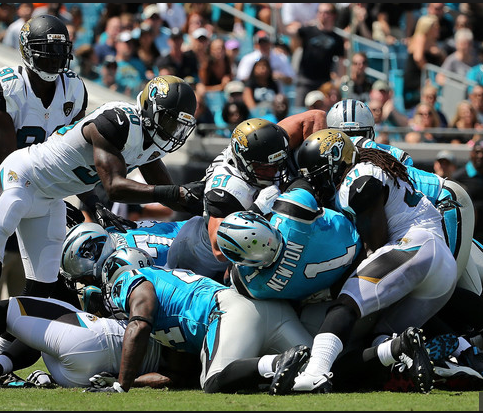