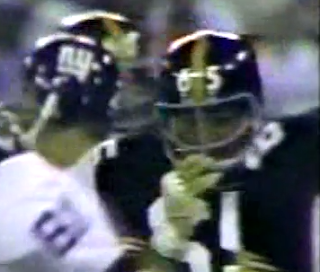 The Bengals, Broncos and Bills are now in, plus we are looking at updating the Jaguars and Panthers, and discussion is continuing on the 1970 New York Giants as mentioned a few days ago.  While all the teams are not complete, we have also managed to add to the site pages for the AFC, NFC and Super Bowl Champions through the years.  Broken links on the site should now be at a minimum.  There are still plenty of items to be added by next weekend, however, when we officially launch on June 12.

As we analyzed the 1970 Giants-Steelers game a few days ago, we revisited the issue of the Steelers' pre-season front helmet numbers (or lack thereof, actually.)  They have a tradition of not putting the helmet numbers on until the regular season, as was discussed by Uni Watch's Paul Lukas in an ESPN Page 2 story a couple years ago. We won't delve too far into this topic, as it is out of the scope of the Gridiron Database, and more suited to be covered by Uni Watch in general, however after looking into this, with the help of Jerry Wolper, we concluded that the tradition did exist in 1970, as in the earlier August 15 preseason game against the Vikings, the numbers were not there.  We concluded, most likely, that they decided to add the numbers early that year only because it was a nationally televised game & stadium opener (and left them there, as they were still there for the next preseason game in Shreveport against the Boston Patriots.)
This was the first year for this tradition, as it did not exist in 1969, and it was in full swing the following year, and preseason helmet numbers have not been used by Pittsburgh since.  Even when they had another national television appearance, in the 1998 Hall Of Fame Game against Tampa Bay, their helmets were still sans the numbers.

On Thursday the Giants, 49ers, Rams and Redskins were added to the database and we only have eleven teams (the Iggles and the ten teams that came from the AFL) to go before all 32 teams will be in. Then it will just be a matter of finishing the yearly index pages and the bulk of database will be ready to go public. That doesn't mean that the work will be done, however, as this website will always be a "work in progress," forever being updated and tweaked in the interest of attaining 100% historical accuracy, which is in fact, unattainable.
As with yesterday's Redskins' pant-stripe detail, the Carolina Panthers' pant-stripe with the cat's head is asymmetrical and will possibly require a left- and right-side view, and those changes will be considered next. 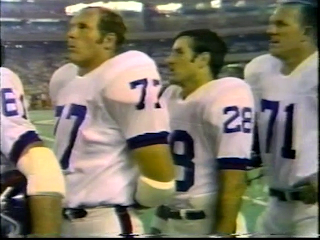 A matter was also brought to our attention Thursday, and that was a few possible uniform database inconsistencies that were addressed upon the viewing of an old recording of one of the earliest ABC Monday Night Football telecasts.  No, not the September 1970 New York Jets at Cleveland Browns game which was actually the first regular season Monday Night game, but an ABC nationally televised preseason Friday night game a few weeks earlier between the New York Giants and the Pittsburgh Steelers.
This game was the grand opening of Three Rivers Stadium, and in viewing it we noticed a few interesting things:  First, as far as the uniform database goes, we learned that the Giants' white road uniforms without the triple-striped sleeves that we had believed had not debuted until 1971, did make an appearance a year earlier (at least in the preseason), and also that in this preseason game they wore them with a "darker" white pant, possibly a gray or an off-white or eggshell color -- or maybe they were just really dirty, (just kidding). 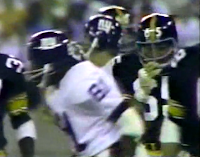 I found it interesting that being that this was the grand opening of  Three Rivers, one of the cookie-cutter astroturf stadiums of the era, they really went all out, painting the endzones almost like it was a Super Bowl, and not just the home teams' end zone, which was black with Steeler-font stenciled "Steelers70", but also the visitors' end zone, which was painted blue with white GIANTS in basic block letters.
Another item of interest noticed by Tim was that the Steelers' well-documented tradition of not having front helmet numbers on their preseason helmets, apparently did not begin until 1971, as in this game the front helmet numbers were present (right).
See more pictures from this game here.  As Tim, who remembers watching this game over forty years later, pointed out, in a sideline interview Giants QB Fran Tarkenton kept calling Don Meredith "Dandy Don," years before the nickname was "cool". 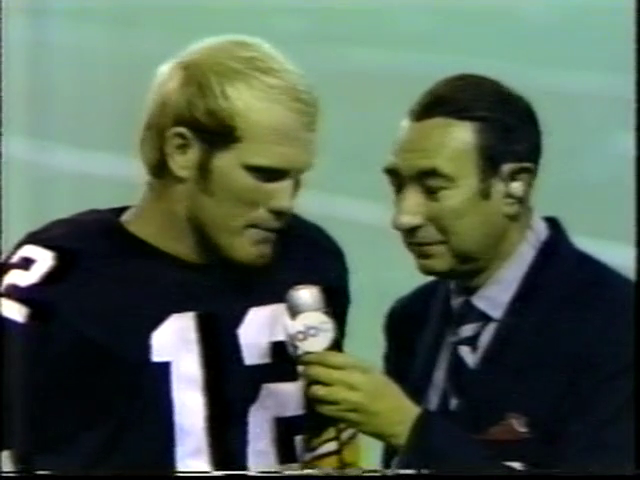 The Falcons, Saints, Bucs and Seahawks team pages are in, we now are more than halfway done in getting all the team pages in.  Of course once that is done there are still all of the year pages and head-to-head matchups to come, but our immediate goal as we work towards the official launch of our website is to get the team pages done, and we are certainly on our way.
Speaking of launching the website, one of the things that must be done before that can happen is the choosing of a domain name, our permanent location here on the internet.  On Wednesday, we finalized our new domain name, and Tim & Bill's Football Uniform Project can now be found on the web at Gridiron Uniforms (gridironuniforms.com).  The new name of the website will be 'The Gridiron Uniform Database.'
Also Tuesday we launched our forum, a place where web visitors can gather to discuss the uniforms in our database as well as submit changes and corrections, and ask questions.

It was also a busy day for Bill as work continued on updating the Redskins uniforms.  In the interest of completeness and accuracy, we made the decision to depict the stripes on the Redskins pants more accurately.  In the image to the left, you can see how the Packers' pants stripe is symmetrical, while in the Redskins' example in the middle, you can see that the stripe is not symmetrical, therefore the decision was made to depict it separately for both left and right side views.  This did, of course require a total overhaul of all of the Redskins' team pages.  Shortly after this, a similar situation was also discovered with the Philadelphia Eagles images, and work will continue on those as well.

Another on-going discussion we are having here at the Gridiron Uniform Database is the proper location of the "grip strips" on the uniform, which was worn by teams such as the 1933 Brooklyn Dodgers and the late 1920s Green Bay Packers as in the picture at the top of this entry.  (Read more about the Packers' Grip-strip uniforms here at the Green and Gold blog).  Is the location of the strips, which aided ball carriers by helping to prevent fumbles as they carried the ball, adequately depicted in our '33 Dodgers database image to the left?  Or would utility dictate that the strips would have been naturally placed more to the inside of the arms, where the ball carrier would be naturally holding the ball. 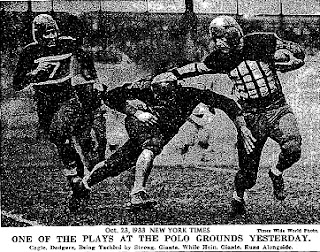 In this picture (right) from the October 23, 1933 New York Times, a Brooklyn Dodger ball carrier is stiff-arming a New York Giant defender, but it is hard to tell exactly whether or not the placement of the grip strips differs greatly from the graphic or not.  The picture also gives a good image of the '33 Giants front uniform number pattern, as we have depicted above.
The Steelers and the Bears paid homage to the "grip-strip" styles in their 1994 throwbacks, however they were purely decorative at this point, as in the modern-day, NFL rules did not permit uniforms to help ball carriers grip the ball.

The Minnesota Vikings, Carolina Panthers, Baltimore-Indianapolis Colts and Jacksonville Jaguars team pages are in, meaning we're at thirteen and only three away from being halfway done with having all of the team pages in.
A couple updates to the database, the 1937 and 1938 Chicago Bears now have orange stripes on their socks instead of white in the database.

Look at the three shirt sleeve stripes on the players in the picture to the left.  They are navy-orange-navy.  Notice how light the orange appears in black-and-white?  So you can see why it's hard to tell white from orange on the sock stripe.

~ ~ ~
Coming Thursday, a major announcement here at the Gridiron Uniform Database about our new permanent home on the web, as well as a gripping discussion of "grip strips," as worn by teams like the Brooklyn Dodgers in the early 1930s.
2 comments

Ravens, Cowboys and Lions, Oh My

Well the Baltimore Ravens, Dallas Cowboys and Detroit Lions team pages are now in the database.  That means nine of the 32 NFL franchises are now included, and more are on the way.  To see what has been added to the database, simply visit our update grid.
Do you know what team wore this uniform, pictured to the left?  If you guessed the Atlanta Falcons, you'd have the right colors, but you'd be wrong.  The Falcons were an expansion franchise in 1966 and weren't around in the leather helmet era.  If you guessed the Chicago Cardinals, you'd be close, but also wrong.  No, the answer may surprise you.  Bet you didn't know they wore red, did you?
That's just one of the many fascinating things to be found here at The Gridiron Uniform Database.
One of the topics of debate is whether or not to include the defunct teams of the AAFC in the database.  While teams such as the Cleveland Browns and the San Francisco 49ers that joined the NFL later would certainly be included, there are other long forgotten members of that league, such as the Miami Seahawks and the Los Angeles Dons.  The decision has been made to include them as well as other defunct NFL franchises, like the 1952 Dallas Texans and the 1934 St. Louis Gunners.
0 comments

1999 Cleveland Browns: More Orange-y than before? 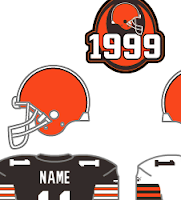 Well the team pages for the two newest teams in the NFL, the Cleveland Browns and the Houston Texans are now in.  (I figured I'd go ahead and knock the Texans out since it was a quick one to do.)  When putting the Browns in I noticed that when they relaunched in 1999, their uniforms were a different shade of orange (brighter and more reddish? maybe) than they had been in 1995.  In 1995 their uniforms were made by Russell, but after they moved to Baltimore, and the replacement team came along four years later, the uniforms were made by Puma.
This shade apparently only lasted two years, as in 2001 the uniforms were made by Reebok and went back to the more traditional Orange.  I had never realized exactly what the difference was about the uniforms, but I do remember when they played their first game in the Hall Of Game against the Cowboys thinking that something looked different.

This blog will be the day-to-day narrative of the goings-on here at the Gridiron Uniform Database, the internet home of Tim & Bill's NFL Uniform Project, as read about on the Uni Watch website.  For more information on the Gridiron Database and to read about the two men behind it, Tim Brulia and Bill Schaefer, click here.     This website will be the website of record for what uniform pro football teams have worn for the past eighty years. Follow along with us over the coming months as we build this website into the most complete database of football uniforms ever created.
1 comments