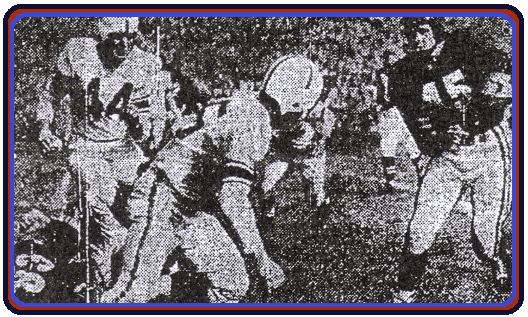 Last week in our forum a visitor asked us about our depiction of in the database, the "cross style helmet" worn by the Baltimore Colts in their inaugural season in Baltimore.  In fact, this was their first game in Baltimore ever, as they moved from Dallas and were the Texans in 1952.  The previous "Baltimore Colts" entry in the league, which was absorbed into the NFL from the AAFC in 1950 along with the Cleveland Browns and the San Francisco 49ers, was unrelated to this franchise.

The visitor, identified not by a name, but simply by the moniker "Frizz's All Helmets" asked about the existence of this helmet:


Is there any pictures of the 1953 Baltimore Colts Cross Helmet available. Trying to collect all mini helmets and have not found any evidence of this helmet. I don't want to go through the trouble of making this helmet and it is false.


It was worn for Baltimore's (version 2.0) first inaugural game on 9/27/53 when they hosted the Bears during Week 1. After this game the cross stripes were removed for the following 7 weeks that they wore white helmets. Additionally, on 4 occasions during the season, Baltimore wore blue helmets instead of the white ones. Tim uncovered this on one of his research trips to the Library of Congress but was unable to take with him a copy of the photographic evidence.

I am glad to announce that through additional research, we have procured a copy of the photograph of this helmet as it ran in the September 28, 1953 Chicago Tribune. We are glad to be able to bring this data to you, and also happy to provide FAH with the photographic evidence he requested.

However this brings to light an important question regarding our research.  Everything we have listed in the database is there because Tim Brulia, our historian, certifies it is correct to the best of his knowledge.  As we get further back in time, a lot of our research is by necessity incomplete.  There are some games from the 1920s and 1930s that simply we will never see photographs of. 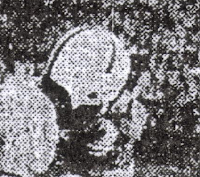 As Tim generally says, if you have photographic proof that something we have is wrong, we'll change it.  But what about as we go further back and we have to fill in the holes between confirmed data with merely educational guesses?  This is an issue that won't be solved overnight, but calls for a definite spelled-out policy as we begin to tackle the 1921-1932 era.  How will a visitor be able to tell the difference between a graphic that we have confirmed versus one that we are merely presenting as our "best educated guess."  I want the future Frizz's All Helmets that come to our site to know that if they see a graphic as listed as being worn by, for example, the 1925 Pottsville Maroons whether it is something we have confirmed, or merely an "educated" guess that we are going with in absence of more concrete evidence to the contrary.  Surely we can't provide photographic evidence of every single game ever played -- that's what our graphics are for.

If we see pictures from twelve of a teams' thirteen games in 1926 and see the same jersey, sure we can assume that they wore that same jersey for the unseen thirteenth game. But without confirming, we still can't say that they absolutely did wear that jersey. We can be 99.99999% sure that that's probably what they wore, but it's not the same thing as being definite. As we move further back in time, we'll let you know exactly what our policy is and how you will know that a game has been "photographically confirmed" or just an assumption.

I understand Frizz's reluctance to accept a graphic of ours as fact.  In fact I feel the same when I view other uniform databases on the web, such as the Baseball Hall Of Fame's Dressed To The Nines website.  I view things on there with a grain of salt.  I look at a graphic on there and I don't think of it as "that's what the Washington Senators wore in 1923"... I look at it as "that's what the Dressed To The Nines website says the Washington Senators wore in 1923."  There is a slight and subtle difference, but it is what it is.  Without referencing the newspaper photograph, our reputation is the only thing that (before viewing that photograph) that proves that the Colts actually wore that helmet.  For some people that isn't enough.   But until our policy changes, it's the best we can do.

But rest assured at the Gridiron Uniform Database, whatever you see in our database is correct*, whether the proof is transparent and available for you to see, or you're just taking our word for it.  (*-But if it isn't let us know, and we'll change it.)