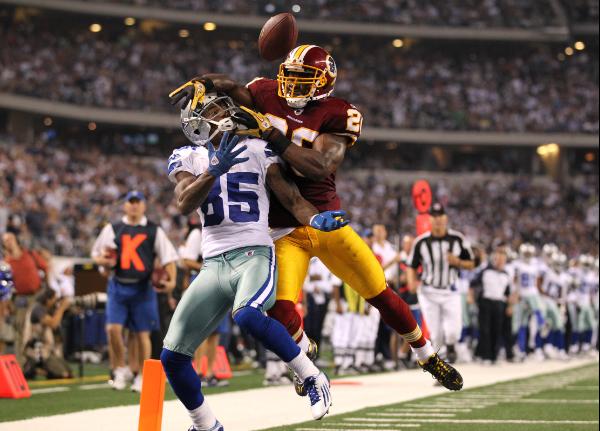 Now that we are getting into the swing of the new season, we wanted to take some time to start a new feature here at the Gridiron Uniform Blog

This is the first installment of what we hope will be a weekly feature for the 2011 season. Sorry about the late start, but what this blog will be about is my humble take on this week's uniform matchups and then I - along with my cohorts Bill and Rob - will rank them from "worst" to "best" as we see them.

So, starting in the order as they are depicted on the Gridiron Uniform Database, we'll get started: 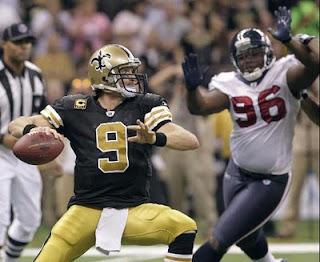 Texans-Saints: The Texans in their somewhat standard white/navy/navy combo. It's a good look, but I would to see the texans bring back the red socks with this combo. Just adds a bit more color. The Saints broke out a throwback look, hearkening back to their origins with the larger logo on the helmet, and the gold munbers with the old gold (that I like to call "brass" gold) pants and black socks with the white and gold stripes. This game made for a pleasing look of modern and throwback.

Giants-Eagles: A bit of a surprise to see the Eagles wearing dark at home so early in the season. But it made for a nice, colorful game; Giants in the white with red trim and the Eagles in the green jersey-white pants look. Nothing new here, but a good uni matchup.

Jaguars-Panthers: Panthers - as usual - with the white at home as is their custom for early season games. Not a very colorful matchup as far as I'm concerned, but it does allow the Jags to sport their teal jerseys and the Panthers in their customary all white combo.

Patriots-Bills: The Patriots in their cunstomary white jersey-navy pants, while the Bills continue to sparkle with in their new get-up. The blue jersey of the Bills looked very vibrant on my rather new HDTV. The Bills are one team that for the most part, got it right when making a uniform change. For two team with blue and red in their uni package, this one works quite well. 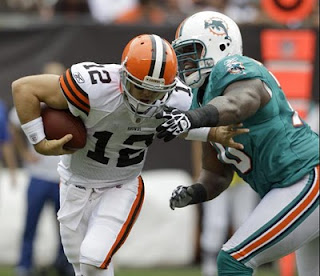 Dolphins-Browns: Had the Browns continued to wear brown at home, the Dolphins would have broken out their white jersey-aqua pants scheme, which I would have loved. But alas, the Browns are apparently going all white home this season and it forces the Dolphins to go with aqua-white-aqua. While nice, it could actually been better the pther way around.

49ers-Bengals: Bengals deciding to make like New Zealand rugby and go all black in this one, The Niners meanwhile go with the white/gold/red look. I think if the Bengals would made one little teeny change and had elected to wear orange socks with the black/black, I would have loved it. But no, and this matchup gets knocked down a few pegs because of it,

Broncos-Titans: This game was called a "code blue" by the Titans, but instead, TEN went with a white/columbia combo. And the Broncos, stayed safe with navy. The potential here was tremendous, but a little too blue for me.

Lions-Vikings: The Vikings went with the throwbacks for this one, which includes the mis-matched purple helmet/purple jersey color scheme. The Lions in their unis that continue to grow on me. Traditional, yet colorful. 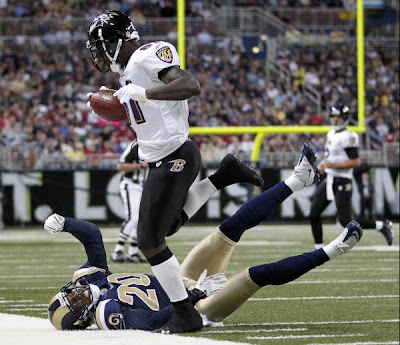 Ravens-Rams: The Rams trot out their third pair of pants in as many weeks (blue week 1, white week 2) with the plain gold pair. It's the more familiar look for the Rams, and I think, the best one. The Ravens in the white top/black pants look, with I think fits this team the best. This was the best available uni combo matchup between these these two, and it works.

Jets-Raiders: The Jets went with the all white look and for this matchup with the rather plain Raiders, I don't think that works here. Had the Jets gone with the green pants and/or green socks, I would have approved. The Raiders in the traditional silver and black. Not one of my favorite uni matchups.

Chiefs-Chargers: Chargers wearing with white at home in the early going. Meaning the Chiefs are in the brilliant red tops. No surprises, but a nice uni matchup.

Cardinals-Seahawks: No surprises, but had the Cardinals decided to go with the red pants, this would have been one of the better matchups. Seattle - as always - in dark at home - with the "unique" blue monochrome look

Falcons-Buccaneers: Bucs going white at home in the warm/hot early season weather. And the pewter pants. Falcons in their best combo. This is the best color matchup available for these two and I liked it.

Packers-Bears: This ancient rivalry has seen many different color palettes through the years, but this might be a first; Packers in traditional road white, the Bears in alternate orange. While some bemoaned the uni matchup, I thought it was great. A lot of color and staying in the bounds of good taste. Yay!

Steelers-Colts: A very traditional matchup and yet, with the Colts in home blue, a very colorful head to head look. Colts pant stripes seem to be very wide on a lot of players. Like many, I really wish something could be done about the "captain bars"  Colts super stretchy jerseys that should be full shoulder loops.

Redskins-Cowboys: Lots of the old-timers are loving the Skins yellow pants  and striped burgundy socks that Mike Shanahan broke out year. I like them, too, but the mismatched striping from head to toe bothers me more than the Cowboys green-tinted pants. Still, these rivals make for a great uni matchup. As usual Cowboys, in White-At-Home. 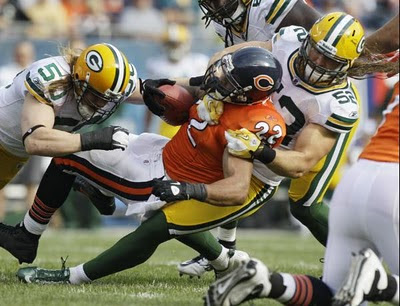 Now remember, if I were to do this ranking twenty minutes from now, it might be altogether different.
Here is Bill's rankings, and some comments by him. 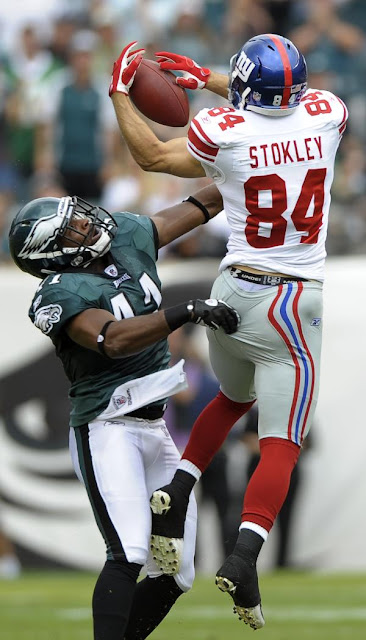 1. NYG @ PHIL - Classic all the way; the dark green has grown on me!
2. PITT @ IND - Two classic uniforms
3. DET @ MINN - Only because Minny was in the throwbacks! Otherwise, bottom half.
4. NE @ BUF - Higher if I didn't hate the Pats' unis.
5. HOU @ NO - Could have been higher but for the navy pants/socks - see number 7.
6. ATL @ TB - Only up here because of no road mono-whites for Atlanta.
7. KC @ SD - San Diego needs some non-navy socks.
8. DEN @ TENN - At least no one was in mono-white!
9. GB @ CHI - 3 words...yellow and orange? Could've been #1, but still escapes bottom 5.
10. WASH @ DAL - Dallas's white jersey combo automatically goes to bottom half!
11. BALT @ STL - Baltimore needs to keep the black pants for the black alt jersey ONLY!
12. SF @ CIN - Mono-black is not a good look for Cincy. Could've been Super Bowl XVI all over again, just without Montana, Anderson, and anything resembling two good teams.
13. NYJ @ OAK - Would be higher if the Jets would go green socks with the mono-white.
14. MIA @ CLE - Cleveland going mono-white keeps us from seeing Miami's version of thame! YEAAAAHH!
15. JAX @ CAR - Mono-white AND teal/sky blue overload? Double yuck-yuck!
16. ARZ @ SEA - Two bad designs in need of a mulligan.


~ ~ ~
Good job, guys, now let me give you my rankings:  (I'll go "countdown" format like Tim did.)
16. Baltimore-St. Louis - just a drab look in a drab dome.  The Rams have different pants and I can't decide which I like with which uniforms.  I get it could've been worse.  The Ravens could have been all white (or all-black)
15. Jacksonville-Carolina -  with rain in the forecast, why did Carolina have to go White At Home.  It wasn't like it was going to be 100 degrees out there.
14. Arizona-Seattle -  meh.
13. San Francisco-Cincinnati - mono-black?  Double meh.
12. Miami-Cleveland - I guess we're gonna see a lot of "no color" in Browns games this year with them going white at home.
11. Denver-Tennessee - Would be a lot higher if Broncos would go ahead and predominantly wear orange at home.
10. Atlanta-Tampa Bay - Kind of a let down with last year's creamsicles in this matchup.  Would rather have seen Bucs in Red-over-White and make the Falcons wear white.  But nooooooo, more white at home.
9. Houston-New Orleans - Would have been higher if the Saints paints weren't so yellow.  (And if they were playing a team whose traditions didn't start in 2002.)
8. New England-Buffalo - A great look for the dominant AFC East team.  Oh and the Patriots played in this game, too.
7. Detroit-Minnesota -  Would have been lower except the Vikings were wearing their normal uniforms, not their throwaheads.
6. Washington-Dallas -  Classic look all around, really like the Redskins wearing the yellow pants all the time these days.
5. NY Giants-Philadelphia - The Giants are a blue team, why does their road jersey have so much red?
4. San Diego-Kansas City - Another white-at-home in the sun.  Maybe the Chargers should try mono-white?  Nah.
3. Pittsburgh-Indianapolis - This game would have looked better if the Steelers still have normal numbers like in the pre-1997 days.  (Oh, and if Peyton Manning was playing, too.)
2. Green Bay-Chicago -  I didn't really mind the orange uniforms.  Seriously.
1. NY Jets-Oakland - Just a classic looking matchup.  If only the Jets had worn green pants, it might have looked better, but then again anything would have looked better if they had decided to tackle Darren McFadden. 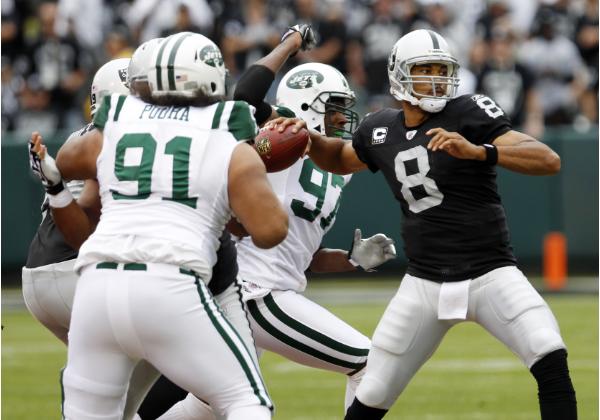 Check back next week and see what we think about week four.
Till then, be safe and enjoy the football!
4 comments