After taking a week sabbatical to catch our breath here at The Gridiron Uniform Database after an exciting Super Bowl XLVI, we return with a new feature here, our newest correspondent and local Giants' fan, Larry Schmitt, aka bigbluelarry, will be bringing us a weekly look at the newest inductees into the Pro Football Hall of Fame.  Also today we'll show you the last installment of Tim Brulia's Super Bowl trivia questions in the final segment of Are You Smarter Than TimmyB?

Tim will be back Monday with a breakdown of all the questions from Super Bowl week and the correct answers so you can see how you did.  Now here is Larry, with the first Hall of Fame inductee of the Class of 2012, Dermontii Dawson: 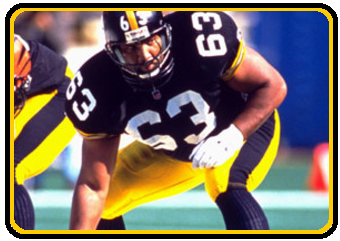 In this era of the modern NFL, where scoring and passing records seem to fall on a nearly weekly basis, it was quite refreshing to see the voters at the Pro Football Hall of Fame remain grounded in the games roots. The Class of 2007 highlights the nuts and bolts of the game of football. Blocking and tackling is the bedrock that the game was built, on prior to rules legislation that facilitated higher scoring and faster action for short attention-spanned television audiences. Two offensive lineman, two defensive linemen, a half back and a defensive back will receive their bronze busts in August. They exemplify what makes football the unique and special game that is is: contests that are won and lost on the line of scrimmage.

Blessed with an unusual combination of strength and speed, Dawson was drafted out of Kentucky in the 2nd round of the NFL Draft by the Steelers in 1988. He played a handful of games at guard, alongside Steeler legend and Hall of Famer Mike Webster. Dawson took over Webster's center position the following season in 1989, where he became a fixture, starting 170 consecutive games, the second most in Pittsburgh history. He also served double-duty as the long snapper on special teams.

The years 1992 through 1997 were Dawson's peak. He was named First Team All-Pro six times (tying him with Jack Lambert, Jack Ham and Alan Faneca for the most in Pittsburgh history) and participated in seven Pro Bowls.

While offensive linemen do not accumulate impressive statistics, their effectiveness can be measured by their teams' success. The Steelers were usually ranked among the top five rushing teams during this span, and they were first in the NFL in this category in 1994 and 1997. Not surprisingly, the top two individual Steeler rushing seasons occurred in this period. Barry Foster's 1,690 yards in 1994 and Jerome Bettis's 1,665 in 1997 were a direct result of Dawson's powerful point-of-attack drive blocking and athletic leads on sweeps. He was recognized for his efforts by sharing the title of AFC Offensive Lineman of the Year award with Miami's Rishmond Webb in 1993, and was named NFL Offensive Lineman of the Year in 1997. The Steelers qualified for the post season six times in the mid 90's behind Dawson's leadership, with five AFC Central Championships, and one AFC Title when they advanced to Super Bowl XXX after the 1995 season. Hamstring injuries brought Dawson's consecutive starts steak to an end in 1999 and he retired following the 2000 season.

What is the only instance of a team wearing a throwback jersey in a Super Bowl?

What was the Super Bowl that featured - for the first time ever - the game officials wearing the NFL Shield prominently on front of their caps?

~ ~ ~
Well, there you have it -- the final group of Tim's Trivia Questions... Check back soon for an update with the answers to these and all of the rest of Tim' Trivia Questions soon, and visit us often as we plan to bring you a lot of new and exciting stuff as we head into the off-season.

It's Almost Here
by Rob Holecko


Indianapolis, Indiana, 1:00 PM CST - Well if you are like me you are all "pre-gamed" out and ready for kickoff, but it is still four-plus hours away.  Here at the Gridiron Uniform Database we have some exciting new features that we'll be unveiling around kickoff, so stay tuned.


We'll have three more of Tim's trivia questions for you now, and we'll be back at kickoff with three more.  In Monday's blog, we'll go over the answers to all of the questions and you can see how you did.


Now whether you are putting the finishing touches on preparing massive amounts of food and beverages for many friends and family or heading out to a Super Bowl party, or you're just settling in to watch the game at home by yourself, we hope you enjoy the game (and the commercials.)


Here is the pre-game installment of trivia questions:

What was the first Super Bowl to feature a team wearing a dark jersey/dark pants combination?

What were the two Super Bowls where the game officials wore special uniforms? 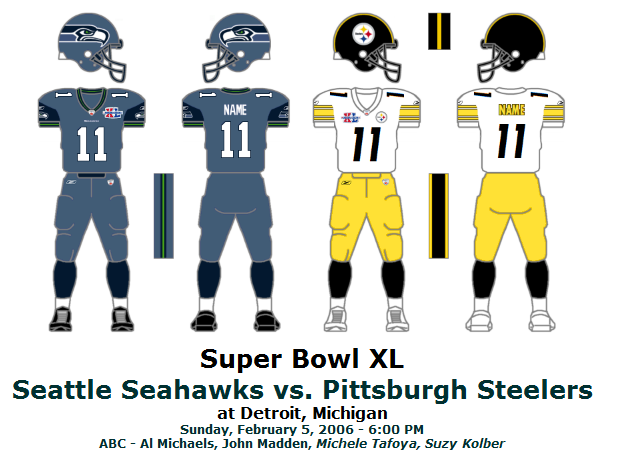 Later today either the Giants or Patriots will become the next franchise to win their fourth Super Bowl Championship. Six years ago today the Steelers won their fifth Championship in Super Bowl XL in Detroit against the Seattle Seahawks.
3 comments