Last week, I received an email from contributor Leo Strawn. To sum up, Leo stated that he was interacting with a man who wanted verify the story on the 1964 Redskins prototype helmet he had just purchased. The story goes that during the middle of the 1964 season, the Redskins created his prototype helmet with the spear logo but waited until 1965 to adopt it. Mr. Strawn then contacted me to see if I had seen anything in my research that could confirm the man's story. I answered that I had not, but that I would do some digging and see if I could find something. I did.

During the 1964 season the Redskins wore their single-feather helmet for the 7th straight season after having begun its use in 1958. I found no mention in the Washington Post backing up the man's claim of the spear-helmet turning up during the 1964 season.

I expanded the search and began searching January through May, 1965. JACKPOT!

"The Redskins decided yesterday to change their helmet insigne with an Indian headdress on both sides instead of the single feather on top. Also considered was the Indian head emblem of the club, wearing the headdress."

This 'smoking gun' clearly illustrates that the change wasn't decided until 'yesterday' (March 19, 1965) rather than at some point during the 1964 season.

But that wasn't all. The article included a photo of a man wearing the 'headdress' prototype. However, that prototype never saw the field. 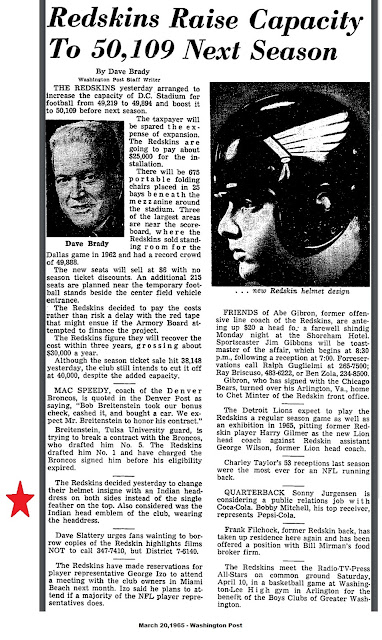 "Paul Dube of Arlington reports that he and a friend have written to the Redskins to protest the proposed change of the helmet insignia from a feather on top to an arrow on the side."

At some point between March and July, the Redskins scrapped the 'headdress' logo and changed to an 'arrow' on the side - what we now refer to as the 'spear' logo.

The July 29 article (written in the form of a 'letter to the editor' stated...

"Note to Redskin chief Ed Bennett Williams: Alan Goldstein, a college student who lives in Wheaton, is heartbroken over the elimination of the symbol...Alan writes that he was watching TV and saw pictures of a Redskin scrimmage and knew immediately that something was wrong...It seems the feather on the helmet is no more..."The insignia (the feather) has become a symbol to us Redskin fans," writes Goldstein. "It doesn't seem like the Redskins without it. I have talked to several other fans and they agree. You don't see the Rams changing their helmets. I think that in view of the way the fans have supported the Redskins through the past lean years, the Redskins can do us one small favor and give us our symbol on the helmet back. Thank you."

There's a lot to digest here. Even back in the 60s, fans didn't like change for the sake of change. Also, the sense of entitlement was strong, as well. Basically, 'you guys stunk but we still supported you,' which was followed by "give us OUR symbol back." (The Redskins had not had a winning season since 1955 and that span also included back-to-back 1-win seasons in 1960-61.)

After all, "You don't see the Rams changing their helmets." I wonder how modern Rams fans would feel about this gentleman's argument in 2020.

Using the newspaper photo from March 20, I put together a color image of the helmet using the same darker shade of burgundy from the 1964 helmets. 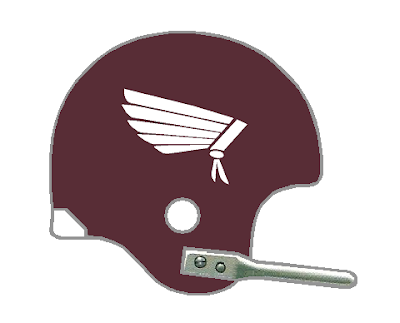 I have seen photos of many NFL helmet prototypes. There was Paul Brown with a table full of Bengal prototypes including a primitive version of the striped helmet that would eventually be modernized into their current helmet that began use back in 1981. There was the photo of Tex Schramm holding the infamous Cowboys' 'boot logo' helmet. The Jaguars were originally to have silver helmets with a leaping Jaguar logo. That design got nixed due to a solid resemblance to the Jaguar automobile logo. The Texans were to originally have had a white version of their current helmet when they began in 2002. There was also the infamous 49ers' 'one-day' helmet that was so offensive to Niners fans that the team scrapped it completely after a single day. Somehow, this Redskin prototype was lost to the ages...until we stumbled across it and brought it back out into the light.