Pretty As A Picture

Even though the games have all been played and fans are awaiting the NFL Draft, the GUD's season never stops. You may have notice some 'old-timey' updates being installed on the site with more to come in the near future.

Also, for those of you who do not frequent the GUD's Forum, an ongoing project is worth checking out. Two topics, in particular, we hope, will draw your attention.

As most of our viewers know, we have been able to successfully document the uniforms being worn for all games back through 1950. We also have better than 95% accuracy for the 1940s. We are still working on filling in those missing gaps.

In order to do so, we have been scouring the online newspaper archives as well as recruiting assistance from public and university libraries in the areas in which games took place.

We have several hurdles in our work.

First, teams in Brooklyn (Dodgers & Tigers), Staten Island (Stapletons), Cincinnati (Reds), and Portsmouth (Spartans) were not well covered photographically by their local media. These teams account for over 90% of our undocumented games from the 1930s.

Second, locating photos of games that were played in Philadelphia and Detroit is financially difficult. The public libraries in those cities want to charge a large sum of money to have their librarians search through their newspaper archives since none of the GUD leadership lives in the area to conduct the search themselves. The funding must be paid up front with no guarantee of success. Other libraries have either performed the searches for free since we know the dates of the games or have charged a modest $5 to $10 fee depending on the size of the request.

When looking upon the photo at the opening of this blog, I'm reminded of a line from the opening minutes of the movie Titanic. Despite its grainy appearance, should this photo have remained hidden - so to speak - from football fans forever? The Yanks wearing bright mono-yellow uniforms cast against the bright red of the Cardinals. The Boston Public Library was nice enough to send this to me in response to my request since a photo for this game did not appear in the online archives of the Boston Globe.

Here is a photo of those glorious 1946 Yanks uniforms displayed on QB Paul Governali... 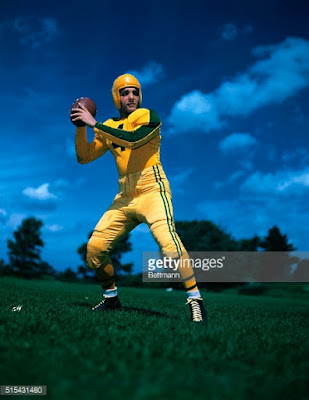 Thirdly, a small degree of hubris may be a contributing factor, as well. By that I mean that several teams like the Redskins, Lions, Steelers, Packers, and Bears spent a number of years with only one uniforms combo. When we assembled the weekly uniform match-up pages, this was taken into consideration. We knew that when the Cardinals would play the Lions that the Cards would be in red jerseys and white helmets and pants. We knew that the Lions would be in blue jerseys with silver helmets and pants. We did not need to see a photo to know what had to be. Still, for games such as these, we'd still like to possess a photograph from that game.

Additionally, some of these games we are working off of the research of our own Tim Brulia who dug into this very topic years ago before the GUD was born. However, at the time, he only documented the uniforms rather than saving a photo off of microfilm. A good example of this would be the 10/7/50 Cleveland Browns @ Pittsburgh Steelers game. We just haven't been able to wrangle the photo that Tim located years back.

As you may have noticed, the GUD has also been working to include Preseason games in our weekly matchups for each season. Unfortunately, these photos have been especially hard to track down. Even home games were rarely covered with photos by major newspapers. Also, in the 1950s, teams had a habit of playing the majority of their preseason games in 'barnstorming' fashion by making trips to cities like Winston-Salem, Hershey, Mobile, Lincoln, Salt Lake City, and Portland. Again, many public libraries were very accommodating to requests. But, alas, even the local papers in those cities appear to have not published photos from every game despite the fact that it was a pretty 'big deal' to have the pros come to play in these non-NFL cities..

In the 1940s, teams didn't play a set number of preseason games. Some played five or six games while others, like the Cardinals and Dodgers, often only played two or three games.

Additionally, teams like the Steelers and Dodgers spent a few years playing their Preseason games against several semi-pro and independent teams. Obviously we will not be expanding our coverage to include those teams but we'd still like to document the League teams, especially in a situation where they wore something out of the ordinary for a given season.

Recently, we uncovered photos of the 1948 Los Angeles Rams playing two exhibition/preseason games in Honolulu against the Hawaiian Warriors team. In the games, the Rams wore their 1947 pants (yellow-blue-yellow stripes) instead of their 1948 pants (blue-yellow-blue stripes).

Below are the lists of the games for which we are seeking photos, both regular season and preseason. If you have any leads or contacts through which we could find photos from any of these games, please contact the GUD hierarchy so we can continue to insure that we are 'just getting it right.'

And thank you for all of the continued love and support you all throw our way. We love hearing from you!