This week we are featuring Senior candidate Jack Butler, the second Pittsburgh Steeler of the Class of 2012, and 20th player to be enshrined in Canton who spent a significant part of his career with Pittsburgh.

Butler was a small-school, undrafted free agent from St. Bonaventure who left his mark on the NFL as a hard-hitting and play-making defensive back for the Pittsburgh Steelers.

Over the course of his nine-season, 103 game career, Butler intercepted 52 passes (an amazing ratio of one interception for every two games played!), which was second most in NFL history at that time. He still remains the Steelers all-time interceptor. 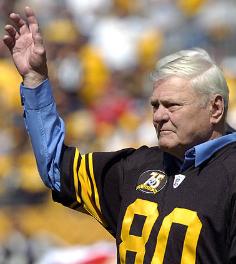 Butler made an immediate impact his rookie season when he intercepted five passes, returning them for 143 yards (nearly 30 yards per return). Two seasons later, he set an NFL record with a four-interception game in 1953 against the Washington Redskins, one of which he returned for a touchdown. In 1954 he scored twice on interception returns, an NFL record at the time. Over the course of his career, Butler recorded five defensive touchdowns; four on interception returns (a Pittsburgh team record) and one fumble return.

He was named to four consecutive Pro Bowls between 1956 - 1959, despite Pittsburgh not achieving much success as a team. During Butler's tenure, the Steelers only had two winning seasons, and never finished higher than third in the NFL Eastern Conference that was dominated by the Cleveland Browns and New York Giants throughout that decade. Impressively however, their defense was usually a rugged outfit. During the Steelers 6-6 season in 1957, Butler's 10-interceptions served as a catalyst for a unit that ranked #1 in points allowed and #2 in yards allowed. He was named All NFL that season, as well as 1958 and 1959.

A knee injury during the 1959 season forced Butler into a premature retirement. He was named to the Steeler's 75th anniversary Team and the NFL's All Decade Team for the 1950's. Team owner Dan Rooney said on Steelers.com at the announcement of Butler's election to the Hall of Fame, "Jack was one player,” said Dan Rooney, “who could have played with the great Steelers teams of the 1970s."