15) Vikings-Bills: MIN in purple/white, BUF in white/white. In recent seasons, especially since the uni re-do of 2011, the Bills have taken to going WAH twice a season; once with normal unis and once with throwbacks. But, in my opinion, the Bills are blooooowing it by not trucking out their sweet blue britches. They go all soulless white. And it hurts because their blue pants contrasting with the Vikings tasty purple jerseys would have sent this matchup near - if not to THE - top. Tsk, so disappointing, 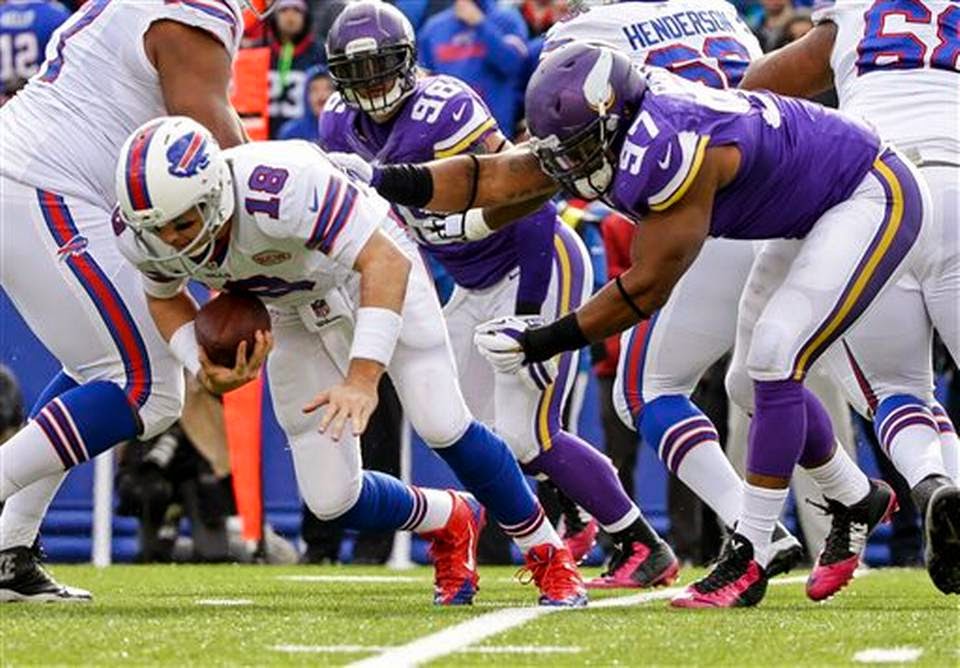 14) Giants-Cowboys: NYG in blue/gray, DAL in white/mint. Maybe there's too much blue and stuff. Maybe I've seen this matchup so often that my senses are dulled. Apart from a touch of red on the Giants helmet and pants that...well, I dunno. I'm bored. This might have been a good time for the ny's to rock those white pants that we have yet to see in 2014.

13) Falcons-Ravens: ATL in white/white, BAL in black/black. One of those stark contrasts games. Ravens again surprise with all black for a day matchup. Too much black for these eyes. Only a sparkle of red ATL trim and only the essence of purple for the Ravens.

12) Dolphins-Bears: MIA in white/white, CHI in navy/white. Oh, these Dolphins. Thinking the "Fins would rock some nifty aqua pants for this one against the strandard navy and white of the Bears, and no MIA stays with the desperately drab all white. Orange, a great color, is inappropriately subdued here.

11) Browns-Jaguars: CLE in white/white, JAX in black/white. Can you say awkward? That's the feeling I get with this matchup. Browns in classic if a bit dated all white, with the brown and orange trim mixing it up with the Jags' somewhat weird looking mixture of black, gold, black, teal and white. Normally I like the old blending with the new, but I am not getting this matchup.

10) Texans-Steelers: HOU in white/navy, PIT in black/yellow. Strong identities when paired doesn't offer much. I know I can't harp forever about the Texans forsaking their red socks for the navy hose, but doggoneit, it is sorely missed. The Steelers may never be at the bottom when wearing black over yellow, though, because it look so darned great!

9) Jets-Patriots: NYJ in white/white, NE in navy/silver. A matchup seen annually might deaden the nerves a bit. Jets in all white couple with the Pats in the usual navy over silver could use a little peppering up, especially for a prime time setting. Say, Jets in green pants or the Pats rocking all navy?

8) 49ers-Broncos: SF in white/gold, DEN in (alternate) navy/navy. With the Broncos in the alternate all navy look, a rare time that I'm not fond of an alternate uniform. But actually, when pitted against the white clad 49ers, I prefer this look. The Niners in white with the red trim, does offer nice contrast to the Broncs in all that navy with orange to accent rather than to dominate. 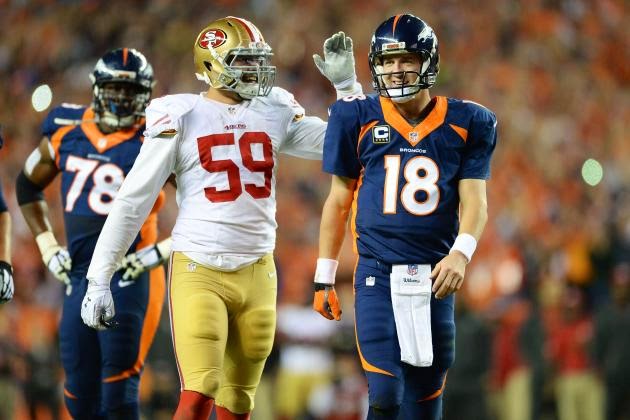 7) Cardinals-Raiders: ARZ in white/white, OAK in black/silver. The Cardinals may have a lot of unnecessary curvy black stripes meandering on this outfit, but the red yoke is a great touch and really mixes very well with the Raiders black over silver. Eye appealing.

6) Saints-Lions: NO in white/gold, DET in honolulu blue/silver. There are those who say a really good matchup is when teams square off with matching helmet and pant colors, Well, it really doesn't get much better than this encounter. One in gold, one in silver. Metallurgists, rejoice!

5) Panthers-Packers: CAR in white/white, GB in green/yellow. Something about the Pack in the green over yellow brings out the best in what their opponents wear. The green (which seemed bright to me this Sunday) and yellow coupled with the black, silver and carolina blue accessorized Panthers was nice and appealing.

4) Seahawks-Rams: SEA in white/gray, STL in navy/navy. Leave it to the defending NFL Champions to select the perfect uni combo going against the 2014 Rams standard of all navy at home. All white would have been to contrasty. white over navy would have been too navyish. But the neutral tone of gray on the bottoms makes this quite palatable.

3) Titans-Redskins: TEN in white/navy, WSH in throwback burgundy/khaki. This works because of the color contrasts. White, navy, light blue, a touch of red, burgundy, gold, beautiful. I am just a little troubled by a left view of the 'Skins in this get up, because the native American on the helmet faces forward, while the sleeve logo faces backward. Plus, I think the Skins should have an unadorned plain helmet to be just a little more authentic. Still, this happens to be a very good pairing. 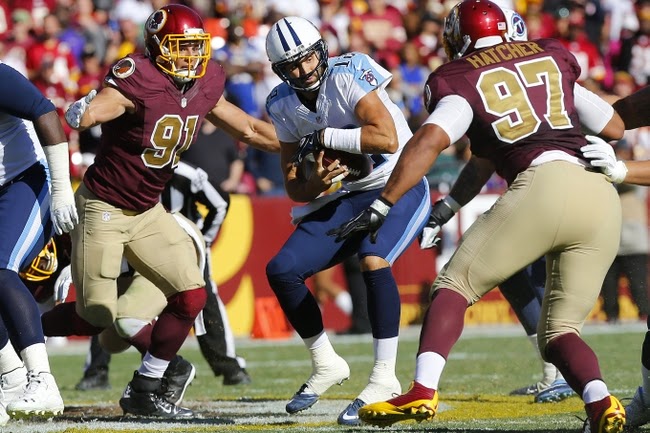 2) Bengals-Colts: CIN in white/black, IND in blue/white. For me, the Bengals in white over black with luscious orange trim brought out the best in the Colts rather sublime blue over white. This combo meshes almost perfectly together. Kudos! 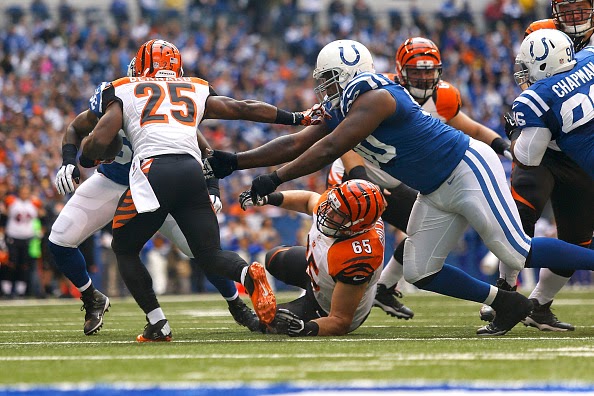 1) Chiefs-Chargers: KC in white/red, SD in (alternate) powder blue/white. Perfection, this. The look the Chargers deserve on a permanent basis against the Chiefs in the classic white over red. No need to elaborate. Let the visual speak for itself.

That does it for Week 7. We are amazingly, nearing the halfway point of the 2014 season. We'll see you next week. Take care,
1 comments