Well, the first true night of Preseason football is in the books. From the well-trained eyes of this graphic engineer one thing seems pretty obvious...

Someone at Nike heard our complaints about NFL jersey collars.

We knew going into this week's full slate of action that several teams were scrapping the 2-tone 'toilet seat' collar in favor of a contrasting 1-color version (Denver) or a collar that matched the color of the jersey (Baltimore, Washington, and San Diego).

What I hadn't planned on was that even in high definition photos the fly-wire feature was extremely difficult to see on white and other light color jerseys, even in close-ups. 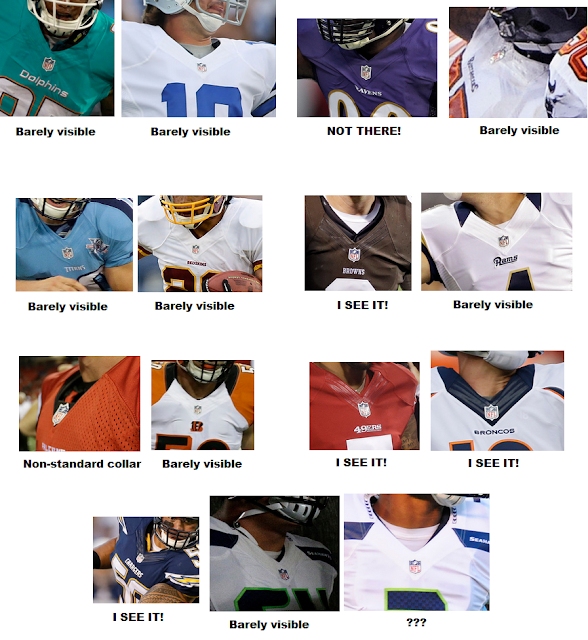 A case could be made that not a single fly-wire is obviously there on any white jersey. You'd literally need to squint on a high definition photo to see it. Even on Miami and Tennessee's lighter colored jerseys it is extremely difficult to pinpoint.

Fly-wire on darker jerseys like those worn by Cleveland, San Francisco, and San Diego (along with Denver's navy collar) remains easy to spot.

Atlanta was one of a handful of teams that opted to go with a non-standard collar last year and that remains the case again in 2013.

News broke earlier Thursday that Baltimore was losing the 'toilet seat' (not news), losing the fly-wire (news), and also losing the NFL Shield from the collar (didn't happen). The photo they displayed showed a Raven in what resembles a practice jersey as evidenced by the advertisements being displayed. The Shield is safe, folks!

- We knew about Miami's changes. Tim documented their nuances in the GUD's last blog entry.
- As expected, Cleveland has removed the Al Lerner memorial "AL" from their left sleeve.
- As expected, Tennessee is wearing a patch commemorating their 15th season as the Titans.
- As expected, San Diego changed their nameplates to yellow letters outlined in powder as well as adding a yellow (not gold) stripe at the bottom of their navy socks - a la the Broncos and their similar orange stripe.

Stay tuned to see what transpires over the weekend!
Bill Schaefer 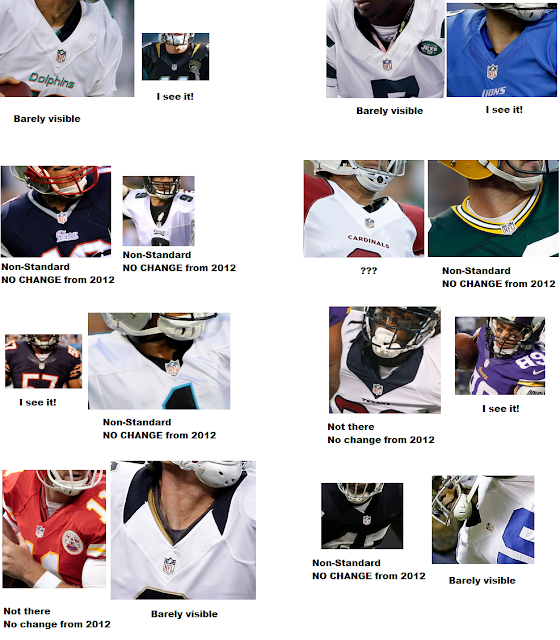 Miami, New Orleans, and the Jets join the ranks of " I think I see it but maybe not, OK, yeah, I think it's still there" with barely visible fly-wires.

I challenge anyone to claim they can spot fly-wire on Arizona's white jersey.We may have to wait until we see the red jersey to be able to pass judgement on this one.

As with Atlanta Thursday night, New England, Philadelphia, Green Bay, Carolina, and Oakland continue the use of the non-standard collars from 2012.

Houston and Kansas City continue the use of the typical collar but, as with 2012, opt out of utilizing the fly-wire. Look for Pittsburgh to join this group again Saturday night.

Minnesota did not wear the anticipated "Last Season at the Metrodome" patch on their home purples. Likely they will now wait until the regular season or even the very last home game to use it.

One more tidbit...New Orleans, St. Louis, and Cincinnati have maintained the 'toilet seat' collars for another year.

As predicted, Pittsburgh remains with the standard collar without fly-wire.  New York joins the large contingent of white jerseys with the fly-wire barely visible.

Tomorrow afternoon we will will see which style of collar Buffalo is changing to from last year's "toilet seat."
Also, will Indianapolis wear the "30th year in Indy" patches?

Buffalo has formally ditched the 'toilet seat' in favor of a non-standard collar similar to those worn by New England, Atlanta, Philadelphia, and Dallas (road navy jersey).

Indianapolis joins the large contingent with a barely visible fly-wire on their white jerseys. The Colts also added an anniversary patch commemorating their 30th season in Indianapolis.

Next week we will analyze those teams who wore white in Week 1 of the Preseason and will be wearing their colored jersey in Week 2 for better conformation of fly-wire presence.