We are in the groove. Time for the Week 2 rankings.

16) Patriots-Bills: NE in navy/silver, BUF in white/white. Oh, Bills. If you're going WAH, please wear the blue pants. That combo looks so sharp that it hurts. But alas. All white against the standard navy over white of the Patriots. Not that thrilling for my distinguished eyes. 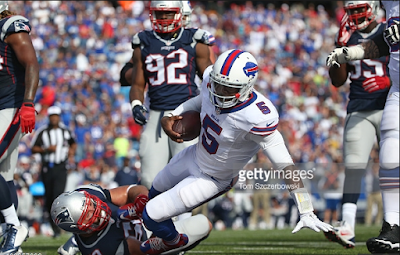 15) Falcons-Giants: ATL in white/white, NYG in blue/gray. We saw this very same combo last year and I wasn't all that thrilled and I'm not again this season. The blue is cool, the gray compliments well, but there's just something with the Falcon whites that seems to be missing something when they face the G-Men.

14) Ravens-Raiders: BAL in white/black, OAK in black/silver. Meh, I don't know what coud have made this one any better. Ravens in all white? Not really. This is when a purple pants dare by the Ravens would have made for a stunning and sweet surprise. But I guess, it is what it is. They still say that, don't they?

13) Titans-Browns: TEN in navy/white, CLE in white/white. The Browns, perhaps ducking for cover after last week's unusual combo, pull of their most conservative look of the new duds unveiled earlier in the year. The orange numbers are a nice break from all those years in brown numbers. Matched up against the Titans most conservative look in their wardrobe, and when you think about what possibly could have been...

12) Cardinals-Bears: ARI (I guess that's what they're using as the Cardinals place abbreviation instead of ARZ) in white/white, CHI in navy/white. Remember about 10 years ago when the Bears stunned the uni geek world by opening the home season in WAH (white at home)? That might been a nice touch here. But tradition rules today. It's still a smart looking matchup, though I would have preferred the Red in red pants.

11) Seahawks-Packers: SEA in white/white, GB in green/yellow. Three options for the Seahawks in this one. I they went second best. The all whites are probably better than white over navy in this case, but I think white over gray would have been the best choice. Of course, the Packers can do almost no wrong in their customary green over yellow gems.

10) 49ers-Steelers: SF in white/gold, PIT in black/yellow. After those yucky black things from last week, the Niners return to earth with the more familiar white over gold. The Steelers in the trusty black over yellow aids and comforts the enemy colors to a degree. 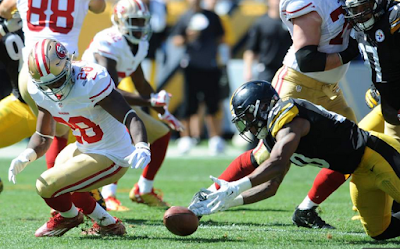 9) Broncos-Chiefs: DEN in white/white, KC in red/red. A now and then all red look from the Chiefs. I like this a lot, but I do think the white socks as opposed to the red that was worn might be a slight improvement. Broncos in standard white on white with all the navy trimmings and a taste of orange slice.

8) Cowboys-Eagles: DAL in navy/silver, PHI in white/white. The Cowboys in their best uni should have shot this one up the tree. But no. The Eagles insisted on all white instead of the dark green trousers. Still, any excuse to get the Cowboys in these bad boys as opposed to the all too familiar white is a bonus.

7) Chargers-Bengals: SD in navy/white, CIN in white/white. Bengals with a rare turn at WAH, and when they go all white, they lately have rocked the orange socks, and that's the right move. We can scream all we want for the Chargers to wear powder blue full time, but the navys here really aren't that bad. Better matchup than expected.

6) Dolphins-Jaguars: MIA in aqua/white, JAX in white/white. The Dolphins in one of the NFL's better uni combos, the magical aqua jerseys over white. The Jags with all white togs makes it a nice visual from these eyes. Maybe some more Dolphins orange would have made things better. But I'll take this. 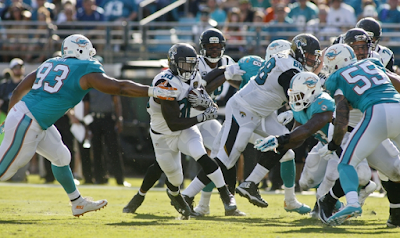 5) Buccaneers-Saints: TB in red/pewter, NO in white/black. In can't really complain about this one. It is so good to see the Bucs in red, even with all the other crazy stuff going on with this uni. Saints, as far as I'm concerned, play it right with the black pants. But yeah, either a nice gold stripe down to side and/or some funky gold socks would give this combo the rightful pizzazz it needs.

4) Texans-Panthers: HOU in navy/white, CAR in white/white. Right now, I am liking this matchup. A good array of colors done right. Navy, pale blue, black, silver and a dash of red is a good modern look without needless bell & whistles.

3) Jets-Colts: NYJ in white/green, IND in blue/white. The only two teams in the NFL without a secondary color pull off their best possible look in this one. White obviously stands out here, but the execution of the spartan color schemes is what stands out for me. If the Jets had gone with the all white look, I would have twitched in boredom. Thanks, Jets. And thanks Colts, for staying blue. 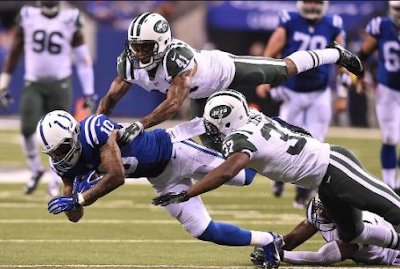 2) Lions-Vikings: DET in white/silver, MIN in purple/white. One of those classic NFC North uni matchups. This one just doesn't get weary at all. The silvers, purples, yellows, honolulu blues and the obligatory black trim is a marvelous blend. 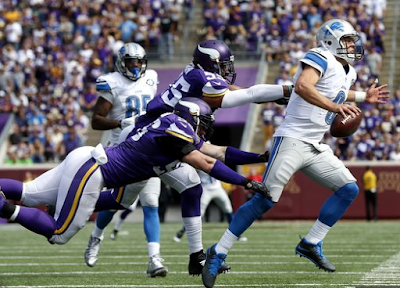 1) Rams-Redskins: STL in white/navy, WSH in burgundy/yellow. Let's toss the Redskins mish-mash striping elements aside. This is a pretty darn good get together, color-wise. No white pants, no double yellow/gold pants pairings. Just a perfect amount of navy, burgundy, yellow and gold done right. I dig this one, baby, 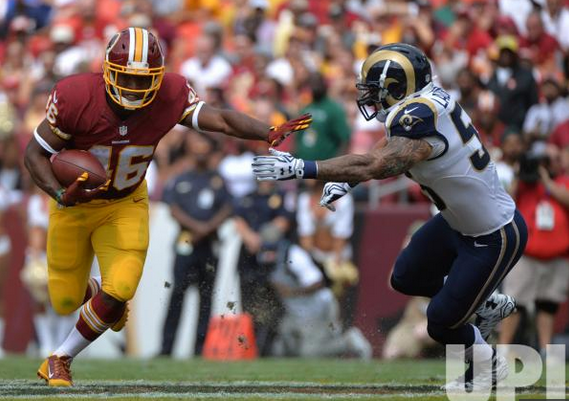 More to come next week. See you then!