My apologies for the lengthy delay.  Had some Christmas commitments to tend to.  But, better late than never!

16) Bills-Jaguars:  BUF in white/white, JAX in black/black.  All that white, all that black. Not enough blue, not enough teal, makes for a real blah bash. 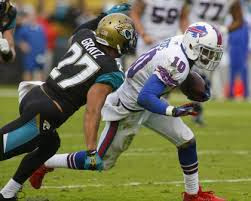 15) Saints-Rams:  NO in white/gold, STL in navy/navy.  The wrong team wore the dark pants in this battle.  The Saints in washed out gold pants going against the all navy Rams just doesn't cut it in these eyes.  Saints in black trou and the Rams in white slacks? Now that's better (sorry, Wendy).  But not the case. Count this one out.

14) Texans-Colts:  HOU in white/navy, IND in blue/white.  Nothing out of sorts, just the blues, with a little battle red on the numbers (Texans).  I can't really say this one blows, but it is a lot of blue and not quite enough red.

13) 49ers-Buccaneers:  SF in white/gold, TB in red/pewter.  Normally I give good marks for the use of metals, but there's also a load of red here.  That doesn't help the cause, so maybe a bust out of the Bucs dormant white pants would have spruced up this matchup.  But as it is, a little heavy on the alloys and the scarlets.

12) Patriots-Dolphins:  NE in navy/silver, MIA in white/white.  After a lip smacking debut of the newaqua pants from the Dolphins for 2013, we see the return to the meh all white from the Fins.  That means the Pats have to carry the load with their navy and silver with hints of red.  It helps, but this one stays in the lower eight.

11) Cardinals-Titans:  ARZ in white/white, TEN in columbia blue/white.  After ignoring this combo before this season, the Titans rock these colors for the second time in 2013.  OK, I can buy that. But then the Cardinals blow it by going back to the white pants instead of going with the red pants, which would have been a really sweet and colorful matchup.  Disappointing.

10) Ravens-Lions:  BAL in white/black, DET in honolulu blue/silver.  Last week, the Lion in winter. This week, the Lion in doors.  And while the Ravens did right by rocking black pants, and the Lions always a plus in the honolulu shade of azure, I can't get worked up about this one.  The colors are great, blue, black, silver, and purple. But well, maybe it's me.

9) Eagles-Vikings:  PHI in white/white, MIN in purple/white.  One of these teams should have worn dark pants, and no, it should not have been the Vikings, but the Eagles.  And the Eagles decide to shun the green pants yet again.  Must be a Chip Kelly thing, certainly not a Timmy B thing!!

8) Seahawks-Giants:  SEA in white/navy, NYG in blue/gray.  The Seahawks have such an array of uni color at their disposal, and in this encounter, they went with the right choice, navy pants.  Works very well and actually compliments the Giants in traditional blue and gray.  Modern Nike versus traditional Nike, and it's a soothing blend. 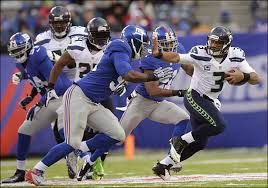 7) Bengals-Steelers:  CIN in white/white, PIT in black/yellow.  Bengals are doing something this season they should have done years ago.  Wearing orange socks with the all whites! Makes so much sense and looks so good, especially against such a rival like the Steelers, who always look smart in black over yellow.  Good stuff, this.

6) Bears-Browns:  CHI in white/navy, CLE in brown/white.  Browns do well to avoid the tootsie roll look, paired against the Bears in classic white over navy, it's a really good looking game.  I like it.

5) Chiefs-Raiders:  KC in white/red, OAK in black/silver.  So very traditional and so welcome to see.  When these two are paired in this particular matchup, it does seem to bring out the best in each uniform, with large doses of black, red, a good helping of silver and some essence of yellow.  Classic.

4) Chargers-Broncos:  SD in white/navy, DEN in orange/white.  The last Thursday nighter for 2013,and this is a beauty.  If this had been a late 90's-early 00's matchup, it would have been navy overload.  No more, a little more white and a lot more orange makes this a great way to see off TNF.

3) Redskins-Falcons:  WSH in white/yellow, ATL in red/white.  Two teams in tri-colors, and it works very nicely.  A bunch of red, but a good helping of yellow and black trim between the two squads.  One of the better matchups for Week 15. 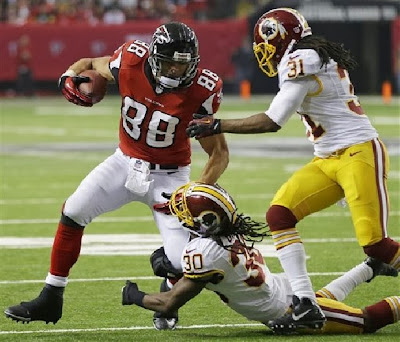 2) Packers-Cowboys:  GB in green/yellow, DAL in white/mint.  Back in 2007, the Packers wore white in Dallas while the Cowboys wore their dark blue and white throwbacks.  Not real appealing.  But this matchup is glorious.  The Pack always look like kings in the green over yellow, and the Cowboys WAH may wear thin because we see it all of the time, but this is the only combo they can wear when they suit up against the Packers. 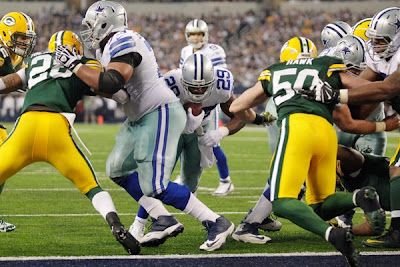 1) Jets-Panthers:  NYJ in white/green, CAR in black/black.  Well now, see what a difference pants makes?? If these guys had gone with the "normal" look, it would have been a sleeper.  But add some dark colors below the waist, and for good measure, add electric blue socks to the Panthers, and this gives me eye pleasure!!  Note to the Jets: Please do not wait until Week 14 in 2014 to crack open your green pants!! 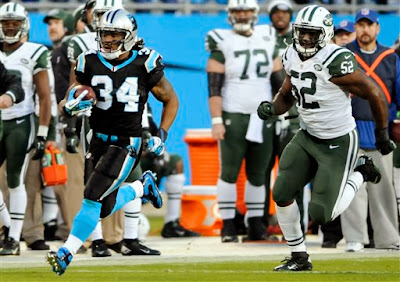 See you next time and Happy Holidays!!