It Makes So Much Sense, They'd Never Do It!

I know this blog has nothing to do with uniforms but I figured this idea would get more play here than in the Forum itself.

I was reading an article today about how the NFL wants to expand its scheduling to include three regular season games in London next year instead of just two like this season.

I got to thinking. See, I'm a math teacher and while I can't memorize a phone number that I just looked up and get to the phone before I forget it, I can still work with numbers with quite a degree of mental agility.

My plan first calls for eliminating Week 4 of the Preseason - for everyone except two teams. On what used to be Preseason Week 4, these two teams would open the season in England, a week ahead of everyone else. They would then be off the following week (Week 2) when all 30 other teams are beginning their season.  The NFL actually did this for a while back in the early 1940s.

There are currently 17 weeks in the regular season with each team receiving a single bye week but with the elimination of Preseason Week 4 there would actually be 18 weeks. Technically, 30 teams would be getting a second bye week at the start the season. Those two opening in England early would be granted their second bye week at some point likely around mid-season.

Every week following, two more teams would play in England and receive the following week off as their in-season bye. After the first 16 weeks of the season, every team will have played in England. Fair and equitable.

To make it even more fair, the first year that it is implemented, every NFC team would be the host of an AFC team. This way, division and conference tie-breakers are unaffected as each NFC team would have 7 home games and 'host' one game in England. All AFC teams would require one road game to be played in England. All conference and division games are still played in North America granting no one a tie-breaker advantage. Fair and equitable.

The next year, things would reverse and every AFC team would give up one home game to 'host' an NFC team in the same way. Fair and equitable.

In order to determine opponents, a simple system could be concocted. Something along the lines of 1s vs. 1s, 2s vs. 2s, etc. based on the previous season's final standings. If put into play, it will be unfortunate that the fans of the four division winners losing a home game will be losing a game against another division winner (from the other conference, albeit) but in this way the London crowds will likely get some quality meaningful games. Before the season started San Francisco fans likely would have been bummed at losing a Houston visit to Candlestick. But in hindsight, was it really a matchup of division leaders as its '1 vs 1' status was predicted? Nothing is guaranteed as parity reigns supreme. Fair and equitable.

As Commissioner Goodell has sought to grow the League in Europe, rather than basing a single team in London where scheduling and travel for such a team would be patently unfair, this system would allow every NFL team to be seen in London every season. London fans could buy season tickets and see up to 16 regular season games for Weeks 1 through 16. Weeks 17 and 18 would then see teams return to play solely in North America and the NFL could continue its recent trend to include division games during the last week of the season. The last two teams to play in England during Week 16 would enjoy Week 17 off before returning to action for the last week of the regular season.

Under this plan, the League would only be committed to pursuing this course for two years. If it's determined that it's not working, stop the program and go back to how it is now and consider the London-experiment over.

One question in my mind is whether or not this plan would make enough money over the course of the season to replace the single lost week of Preseason 'action.' A sold-out Wembley Stadium likely brings in more than most regular NFL Stadiums and should serve to recoup that missing Preseason money. If it doesn't, the League could always have all teams begin their Preseasons during 'Hall of Fame Game' week instead of just starting with two teams who are forced to play a fifth Preseason game one week before everyone else. Everyone would still get their four Preseason games as always.

I can also see complaints coming from West Coast teams about the extended travel. Not to make it sound like East Coast bias or anything but London has become the focus of expanding the League, not Asia. If the League had determined that Japan or China was the way they needed to go, the eastern teams would have greater cause to gripe. It's just the way things shook out.

In closing, I'll throw a uni-related tidbit into the mix. Make these games color vs. color except where two teams share the same color jersey or two colors too close together like navy and black. That would also serve to have these games stick out.

OK, fans. Commence shooting holes in my theory.  Give me your best shot.
Bill Schaefer

Wow.  At the quarter pole already?  They do go fast these days.

A note before we get started: October is National Breast Cancer Awareness Month.  We at the GUD fully support the NFL's sponsorship of the cause.  You will note all during this month teams and officials wearing pink accessories.  However, the GUD will monitor the uniforms during the month only the teams normal colors.

Now, let's move to the task at hand:

14)  Panthers-Cardinals:  CAR in white/white, ARZ in alternate black/white.  Really not so good.  Anytime the Cardinals wear the pointless black jerseys, I will knock it down to the lower level.  Plus the Panthers in all white (with the carolina blue socks), while sleek, just doesn't have the punch to off-set the Cardinals', um, duds. 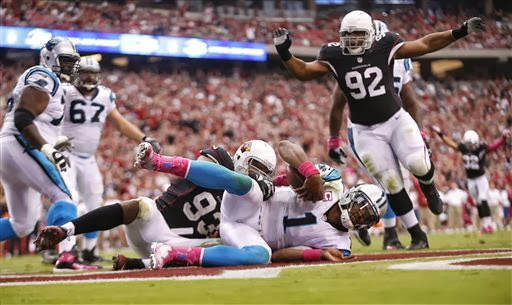 13)  Jaguars-Rams:  JAX in white/white, STL in dark blue/dark blue.  As we move on with the Jaguars exotic mix of teal, black, matte black and gold on a white/white uni, it goes up against the Rams in all dark blue.  Maybe yesterday I would have raved about this matchup.  Today, it looks rather blah.

12)  Jets-Falcons:  NYJ in white/white, ATL in red/white.  The Monday Nighter in recent years may have yielded the Falcons in their 60's throwbacks, but not so this year.  Still, the bright red jerseys works well and carries the load against the Jets stark whiteness.  Still say the Jets should wear the green socks when in all white, because this look is just too...I don't know...white??

11)  Ravens-Dolphins:  BAL in purple/white, MIA in white/white.  Ravens do white pants in the South Florida sun, which is good.  Dolphins go all white, which is not so good.  It really is time for the Fins to go with aqua pants with the white tops, simply for the better.  So this matchup is down the list.

9)  Eagles-Giants:  PHI in white/white, NYG in blue/gray.  Eagles with a surprise decision to use white pants with the white jerseys against the Giants standard of blue jerseys and gray bottoms.  And that choice was a letdown.  The Eagles in green pants against the Giants in blue is a sharp spot on look.  Not this one.

8)  Texans-49ers:  HOU in white/navy, SF in red/gold.  Nice matchup. Really.  This is a good one, with nice unis, colors, combos, and the like.  But, it just doesn't excite me.  We don't see this matchup that often, but can't explain the X factor, why I'm just not that pumped on this one.  But I will say, the Texans red numbers do pop when paired on those Niners scarlet jerseys.

7)  Chargers-Raiders:  SD in white/navy, OAK in black/silver.  If I'm not mistaken, the second latest kickoff (11:35 PM EDT) in NFL history. So, most folks were in bed while this one was in action.  Those who are more nocturnal saw a nice uni matchup, the Chargers showing off the navy pants with the white jerseys punctuated by navy, yellow and a pinch of powder blue lightning bolts.  Against the Raiders in their normal virtually whiteless unis, the shiny sliver numbers and NOBs, the silvery pants and the thin black side stripe.

6)  Saints-Bears:  NO in white/black, CHI in navy/white.  The Saints again go with black pants to suit up with the white jerseys at the Bears' always powerful navy jersey with the 73 years old white pants.  I just happen to think this is a really good matchup, better than had the Saints worn the gold pants.  It just looks right from here.

5)  Lions-Packers:  DET in white/silver, GB in green/yellow.  This matchup, like most NFC North matchups, feature tradition as a major uniform look me up.  Continues here.  Nice Lions uni and awesome Packers green and yellows.  That honolulu blue with a touch of black and the earnest helpings of the Packers in dark is ace.

4)  Broncos-Cowboys:  DEN in alternate navy/navy, DAL in white/mint.  The Broncos go with the full navy, giving the orange a rest, and really, I like it. Relegating the dreaded dark blues to alternate status for the Broncs is a good move.  Not good enough to be primary, but certainly good enough for the alternate route. Pairs well against the standard Cowboys WAH (white at home).

3)  Chiefs-Titans:  KC in white/red, TEN in columbia blue/navy blue.  Really, why would the Chiefs ever go all white?  Pairing this look with the Titans in two tones, this bold red with hints of yellow by the Chiefs creates uni eye candy for me.  Like this one a lot!

1*)  Patriots-Bengals:  NE in white/navy, CIN in black/white.  I have always said that a team in a triple color uni is a plus.  When both teams are in tri-chrome, it's a bonanza.  White. silver, navy, orange, black come together and satisfies my uni appetite for variety.  Plus a pinch of red from the Pats, and it fills the senses. 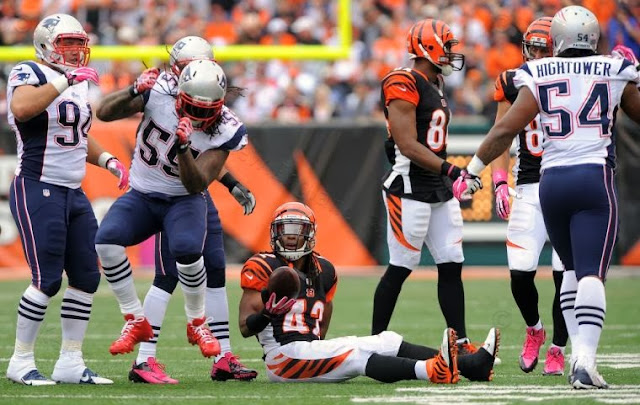 1**)  Bills-Browns:  BUF in white/blue, CLE in brown/brown.  When our own Rob Holecko broke the news that the Browns were going to break out the all brown look, I was incredulous.  I thought the Browns permanently ditched the brown pants.  But no, not only did they trot them out, they couple them with the brown jerseys!  And for good measure, they pulled up brown hose instead of the white striped socks.  Call the look what you will (my daughter tagged it the "tootsie roll" uni with a pumpkin on top!), it was certainly unlike anything seen before.  The Bills, the opponents, wore their best combo for the event, the white jerseys and the perfectly blue pants with blue socks.  What a (fill in the blank here _________) matchup! 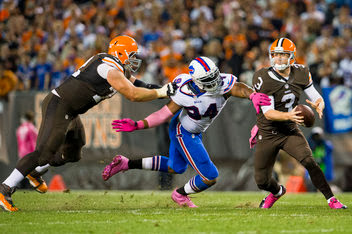 *Top one under normal circumstances.

**Top one for sheer audacity.

We'll be back next week with Week 6.  Till then, enjoy the football and enjoy the GUD!