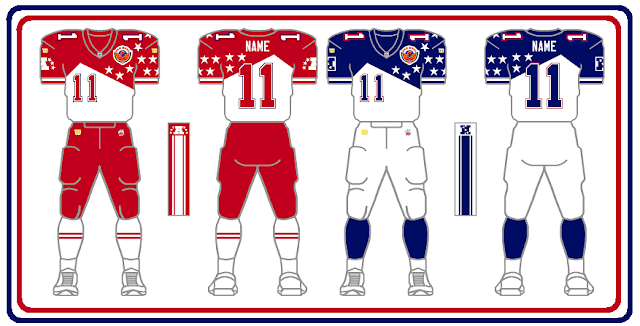 We start with the very first NFL Pro All-Star Game between the New York Giants and the NFL All-Stars (with help from some players from non-NFL west coast teams) played at Wrigley Field in Los Angeles on January 15, 1939.  The Giants wore their standard red jersey, while the All-Stars wore a rather generic uniform of white helmet, plain blue jerseys, white pants and blue socks.  For the next two Pro Star games (both played in L.A.), the NFL Champs (the Packers and Bears respectively) wore their normal garments, while the All-Stars wore outfits that featured a red jersey with a white shoulder insert with a blue star on each shoulder.  After the 1941 and 1942 seasons, the Pro Star Game was played in the colder climes of New York and then Philadelphia.  Uniform wise, these games resembled their baseball counterpart as the Champions wore their own unis against the All-Stars, who wore their normal team outfits, making for a colorful - if helter-skelter - look for the brave fans in the stands. 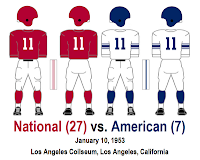 After an eight year hiatus, the Pro All-Star Game was resurrected by the Los Angeles Newspaper Charities Associaiton and played at the Memorial Coliseum.  The format was the best of the American Conference playing the best of the National Conference.  The uniforms were exact duplicates of each other, with one team in red helmets and jerseys, the other side in blue helmets and jerseys.  In the 1952 season game, the Pro Bowl rectified the confusing scenario by permanently outfitting the American (soon to be Eastern) Conference in red helmets and jerseys and the National (soon to be Western) Conference in blue helmets, but with white jerseys.

The East and West would retain the jersey colors right through 1969.  The only real changes to these duds would be: 1957 season when both team would apply white rounded helmet numbers, 1958 season when the helmet numbers were dropped, but TV numbers would be added to the sleeves of both jerseys, and a thick red shoulder stripe would be added to the East's red jerseys, 1965 season when the generic helmets would be repainted gold for both squads, with a red/white/red stripe pattern for the East and a blue/white/blue stripe pattern was given to the West. And for 1969 season, both sides wore the commemorative patch for the NFL's 50th season on their left shoulders. 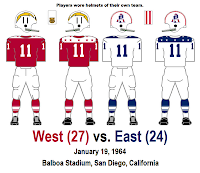 Before we hit the Pro Bowl chronology since the 1970 merger, let's take a quick rundown of the AFL All-Star Game's uni history.  The AFL didn't start playing an All-Star Game until year 2, after the 1961 season.  The East wore a white jersey with blue shoulders bedecked in white stars while the West players wore red jerseys with white shoulders and a bevy of red stars.  The unique feature was that the players wore their regular team helmets in the fray, making the game a little more colorful.  The Divisions would switch uni colors every now and then through the years. One game (played after the 1965 season) featured the Champion vs. All-Stars format (similar to what the National Hockey League was doing with their All-Star Game at the time), with the Buffalo Bills wearing their normal white uniform against the All-Star clad in red. Changes to the unis came in the last two years the AFL ASG was played (1968 and 1969 seasons).  The East would have all players wearing a plain white helmet and the West featured the players in solid blue helmets.  The next year, the AFL, perhaps sensing history, bedecked both teams with the AFL logo on the helmets and the jerseys.  The ASG game played on January 17, 1970, was the very last the American Football League game ever played.  One twist of irony in the AFL All-Stat Game...one of the innovations of the AFL, names on the backs of the jerseys, was never worn on any of the AFL All-Star jerseys! 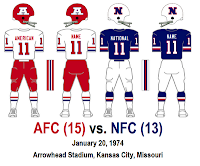 Now back to the post-merger NFL. The Pro Bowl was now referred to as the AFC-NFC Pro Bowl, and the uniforms reflected the new NFL.  The best of the AFC would wear a red helmet with a large white "A" trimmed in blue, with a white/blue/white stripe combo, a white jersey with "AMERICAN" on the front in red with red numbers and finally, names on the back, red pants and white socks.  The NFC's finest would sport a white helmet with a medium sized blue "N" outlined in red, with a blue/red/blue stripe pattern, blue jerseys with "NATIONAL" on the front in white with white numbers also with names on the back, white pants and blue socks.  With the exception of some tweaking (or in case after the '73 season, the removal) of the stripes, these unis would be untouched through the 1977 season ending Pro Bowl. 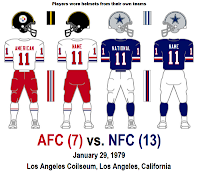 In the 1978 season game, the NFL decided to allow the players to wear the same team logo helmets they  wore during the season.  This look would last right through the 1987 season ender.

Starting with the 1988 season finale, the NFL began the tricking up phase of PB uniforms.  For the first time, stars became a part of the look, going down the sides of the pants, as well as the PB logo on the jerseys. Also for the first time in 1988, the maker's mark (Wilson) was affixed to the uni.  This revision lasted through the 1993 season ender. 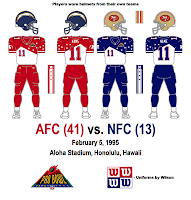 By the 1994 season, the Pro Bowl unis entered their current phase, with uniforms changing design every two or three years.  Such zany items as fading colors, sublimated logos, team wordmarks, PB logos below the back numbers, ankle length pants (the 2010 season edition), etc. come to mind.

But two things have remained constant in spite of the free-form design era:  1) Players wearing their own teams' helmets and 2) The base color for the AFC has always been red and the NFC's has always been blue.  That goes back to the 1970 merger. 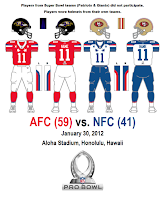 Oops! I almost forgot!  We even added the lone AAFC All-Star Game, the Shamrock Bowl that was played after the AAFC's 1949 season!

I'd like to thank the website mmbolding.com in particular for their detailed history of the Pro Bowl.  Also we courtesy the database of the Los Angeles Times, gettyimages.com, google news archive and newspaperarchive.com for much of the information that you see here.  Again, without the artistic talents of our own graphic engineer, Bill Schaefer, the GUD would not be able to make this valuable addition to the database.  Whatever you may think of the Pro Bowl today, the game has been an integral part of the NFL's history and to not include it would be a disservice to the mission of the GUD.

With the recent completion of adding the 1920-1932 uniforms and this inclusion of the Pro Bowl's uniform history, the GUD has completed its task of the complete history of Pro Football Uniforms from the beginning...or have we?  Stay with us for the coming season to find out! 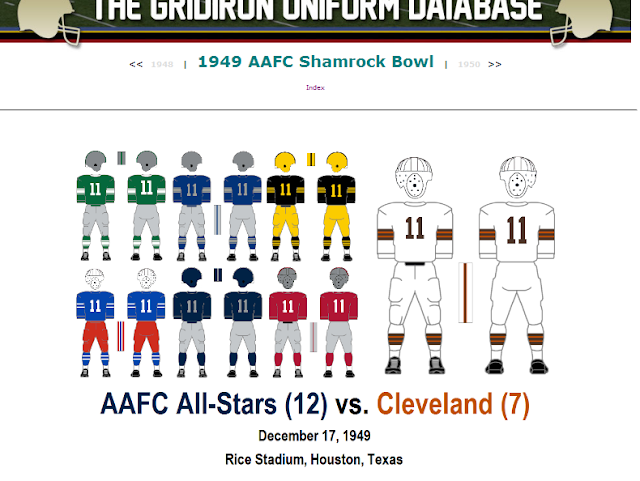 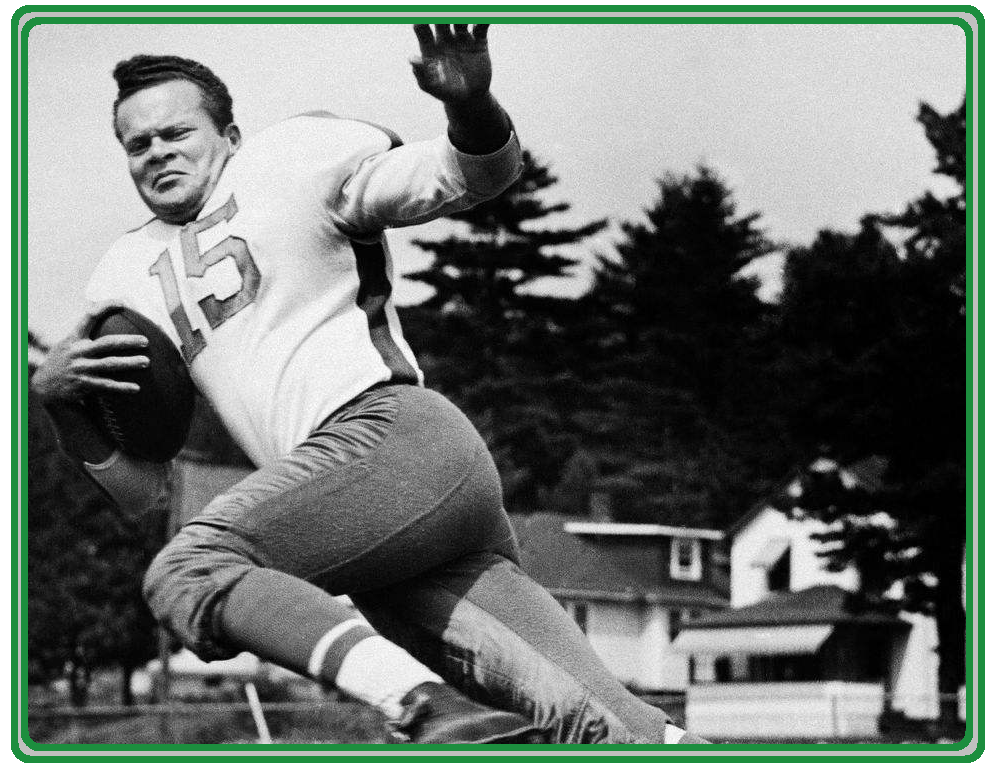 Steve Van Buren, arguably still the greatest Philadelphia Eagle of them all, passed away on August 24, 2012.  While his death stirred little news outside of Philadelphia and possibly Baton Rouge, Louisiana, where he attended college at LSU, his impact on the annals of NFL history is immeasurable.

Born in Honduras, he played for the Eagles from 1944 through 1951, only eight seasons, but in those eight seasons he had 5,860 rushing yards, which was an NFL record that lasted until Jim Brown came along.  He also led the NFL in rushing four times; 1945, 1947, 1948 and 1949.  He, Brown (twice) and Emmitt Smith are the only rushers to lead the league three consecutive seasons.  He was a consensus All-Pro five times, and the first Eagle ever inducted into the Pro Football Hall of Fame, entering in 1965,  in only the third class of enshrinees in the Hall's history.  In 1994, he was selected to the NFL's 75th Anniversary Team. 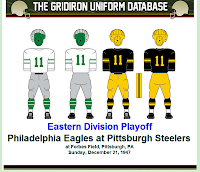 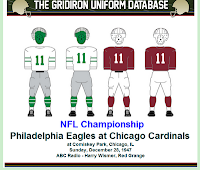 It is the years of 1947, 1948 and 1949 the we will focus on here.  For in those three seasons, the Eagles truly hit their golden era.  The Eagles made the NFL Championship Game in 1947 by winning a tiebreaker game at Pittsburgh (the Steelers only playoff game in 39 years) for the Eastern Division crown.  The Birds then lost a back and forth thriller against the Cardinals at Comiskey Park in Chicago, 28-21.  Although Van Buren did get a touchdown in the game, on a one yard plunge, he was held in check by the Cardinals defense, racking up only 26 yards on 18 carries. 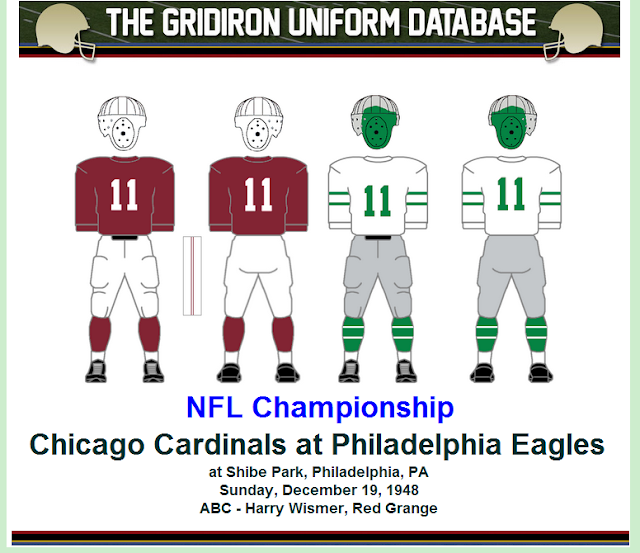 In the 1948 Championship Game at Shibe Park in Philadelphia, commonly known nowadays as the Blizzard Bowl, Van Buren scored the lone touchdown in the game, late in the fourth quarter, a five yard romp off right tackle.  The Eagles won their first NFL title, 7-0.  In spite of the nearly white-out conditions, Steve was a workhouse, plowing for 98 yards on 26 attempts.  Van Buren almost missed the game. Thinking the game would not be played due to the weather, he remained home until Eagles coach Earle "Greasy" Neale called him and told him the game was still on. He had to catch 3 trolleys and walk 6 blocks in order to make the game on time. 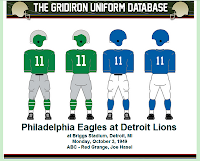 Early in his sixth season, on a Monday Night in Detroit (on a game that was broadcast -- at least by 1949 standards -- on ABC over 20 years before Monday Night Football began) Van Buren broke Clark Hinkle's NFL career rushing record of 3860 yards, rushing for 135 yards on 33 attempts with two touchdowns against the Lions. 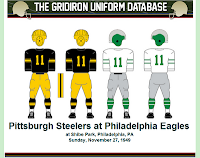 Later in the season, on the Sunday after Thanksgiving, he had one of his best games of his career, rushing for 205 yards against the Pittsburgh Steelers. Led by Van Buren the Eagles coasted to an 11-1 record and won the Eastern Division to reach their third consecutive NFL Championship Game where they would face the Los Angeles Rams. This would be the first championship game ever played on the west coast, and the Eagles won their second straight title, defeating the Rams 14-0 at the Coliseum.  The game was played in a steady flow of rain.  Though he didn't score, and though the field was quite treacherous, Van Buren was certainly the player of the game, racking up an astounding 196 yards on 31 rushes, including a long one for 49 yards. 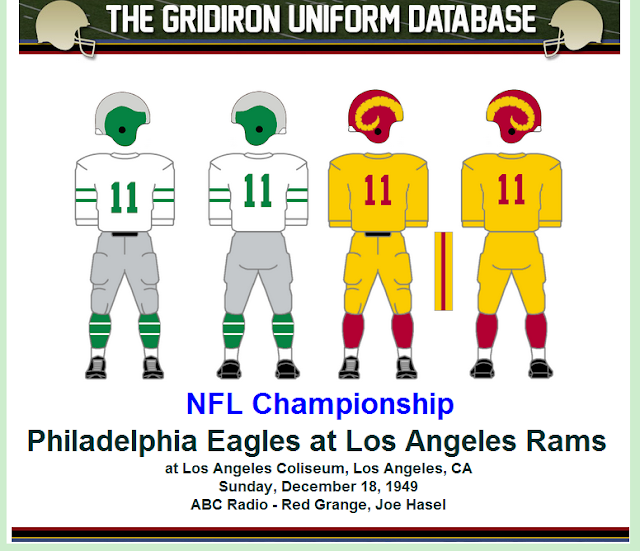 In the two Eagles championship games that were played in, to be kind, miserable conditions -- Van Buren racked up an incredible 294 yards on the ground.  He was definitely a "clutch" player to be sure! 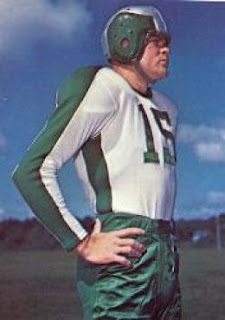 Steve's number 15 has been long retired by the Eagles.  While at the time of this writing it is uncertain how the Eagles will memorialize SVB on their uniforms, I would certainly hope it would be with the jersey patch as opposed to a 1" decal on the helmet.  The Gridiron Uniform Database remembers Steve Van Buren, still the highest flying Eagle of them all.

(Information courtesy of pro-foootball-reference.com and wikipedia.org)