14) Dolphins-Eagles: MIA in white/white, PHI in green/white. OK, who is responsible for the DULLphins trotting out all white continuously week after week? The Eagles save this one from total wretchery with the appealing green over white, but not enough to spare the visual misery. 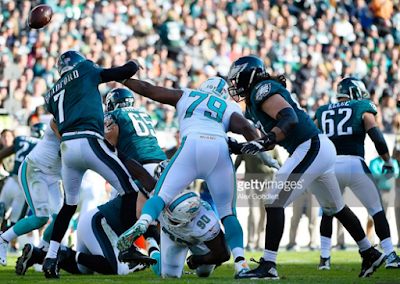 13) Panthers-Titans: CAR in white/white, TEN in navy/navy. Loads of blue here. The Titans again going full navy against the Panthers in full white. The Titans have a smart look in navy over white or even navy over columbia blue. Those chose the all navy set and well, it ain't bad, but it ain't the best, either.

12) Bears-Rams: CHI in white/navy, STL in navy/navy. I like the monochrome a lot, but maybe it's playing itself out a bit. Ulp! Did I really say that? In this case, I think it is. The Rams would have been much better off with the white pants in this game. As it is, with two teams in navy helmets, one in navy jerseys and two in navy pants, it's a Navy heavy matchup that only Annapolis could appreciate.

11) Jaguars-Ravens: JAX in white/black, BAL in purple/white. I'm good with this one. Half and half gold/black helmet with white jerseys with black and teal mixtures, Black lids with bright purple jerseys and black and gold blends. A modern pairing that worked better than expected.

10) Cardinals-Seahawks: ARZ in white/white, SEA in navy/navy. For those wishing for the Seahawks to try a different color pair of pants with the navy, forget it. Like the Dolphins in the all whites, the Seahawks in the all navys is starting to get a bit tired. While it is a great look, the 'Hawks have the ability to mix and match with the best of them, but sadly choose not to. Cardinals could also have helped some by switching to red britches, but chose not to. Sigh.

9) Texans-Bengals: HOU in white/navy, CIN in alternate orange/white, Again, a matchup which is good, but could be better. The Bengals would have looked ferocious with black pants, OK, then perhaps black socks would have been better with the white pants? Texans, really time to go back to the red socks with the navy pants? Oh well. Still better than a lot of other matchups this week.

8) Patriots-Giants: NE in white/navy, NYG in blue/white. The Giants pick the right time to wear the white pants. Take a rather routine matchup into something snazzy. Advice to Big Blue: Try the white pants with the blue jerseys on a full time basis next season. 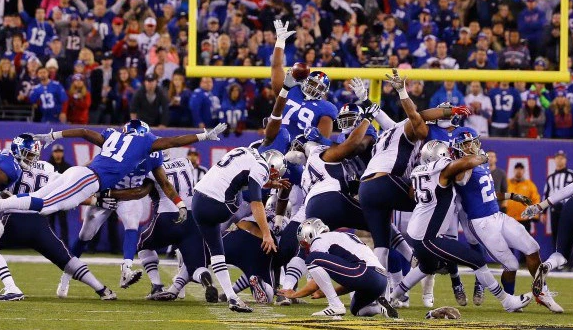 7) Browns-Steelers: CLE in white/brown, PIT in black/yellow. The first time the storied PIT-CLE rivalry with the 2015 Browns' duds in action. It looks sharp, but points are subtracted because the browns chose brown socks to accessorize their brown pants. Takes away a bit from the matchup.

6) Lions-Packers: DET in white/silver, GB in green/yellow. No complaints by this reporter with this traditional color pairing. silver, honolulu blue with streaks of black against the lovely green and yellow Packer garb. A visual feast.

5) Bills-Jets: BUF in Color Rush red/red, NYJ in Color Rush green/green. In what was easily the most anticipated uniform matchup during the GUD's brief 4½ year history, both teams trotted out specially made unis for what the NFL called the "Color Rush." The Bills from the neck down clad entirely in red, the Jets likewise entirely in kelly green. The first game since the Cowboys and Chiefs met in 2009 in which both teams wore dark jerseys, the teams resembled Christmas decorations gone wild. The Bills, who have featured red as part of their color scheme since 1962, wore it a base color for the first time ever. The Jets, switched shades of green to kelly for the first time since 1997. Certainly a visual jolt unlike anything seen in the NFL in some time. Personally, I think it was worthwhile, but it sends a fear in me that the NFL and outfitter Nike may be headed in a direction that college football has been in for the last decade or so. Namely, a weekly set of different unis. Something we really don't need ever. 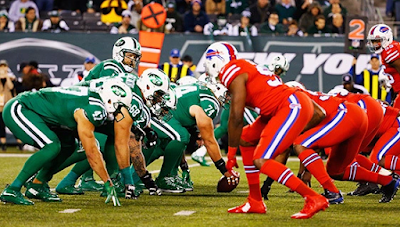 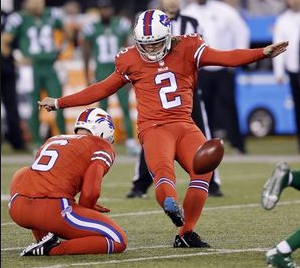 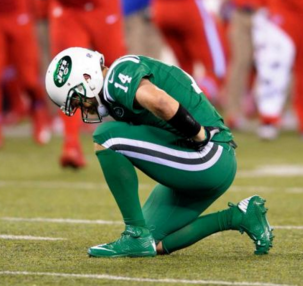 4) Chiefs-Broncos: KC in white/white, DEN in orange/white. Ugh, the Chiefs, whose normal white over red combo is so, so visually joyous, decided to go full white, which so, so visually disappointing...but wait. Hold your horses. The Chiefs decide to wear the red socks with this all white monotony? Brilliant! It's a look that KC hasn't worn on a regular basis since 1967?? Couple with the reliable Bronco orange over white and it rocks! Moral: Never overlook what a pair of socks can do to a football uniform! 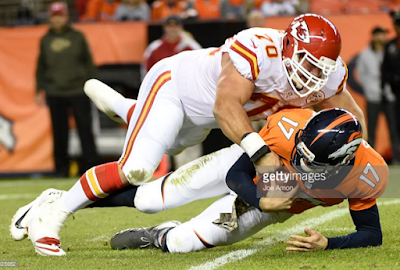 3) Vikings-Raiders: MIN in white/purple, OAK in black/silver. A case of when one team looks so good they make the other look even better. The Vikings in the dynamic white over purple looks great and couple it with the Raiders mundane but acceptable black on top of silver, it makes for a bit of visual magic. 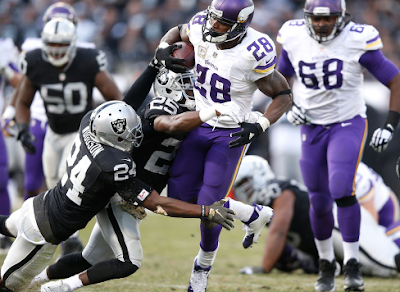 2) Saints-Redskins: NO in white/black, WSH in burgundy/yellow. When you get two teams with a quintuple of color (gold/white/black/burgundy/yellow), it scores way high in my laundry list. It's what I look for in a pro football game. That's all there is to it. 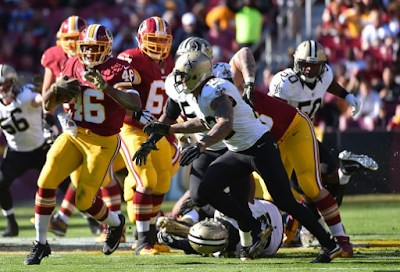 1) Cowboys-Buccaneers: DAL in blue/silver, TB in white/pewter. The Bucs with the WAH decision and it works nicely. Cowboys wear an outfit in which the colors match somewhat, sharp shiny silver pants, with a sweet deep blue top with a star on each sleeve paired up with the busy Bucs gear in pewter trousers with red socks. I'm pleased by all this. 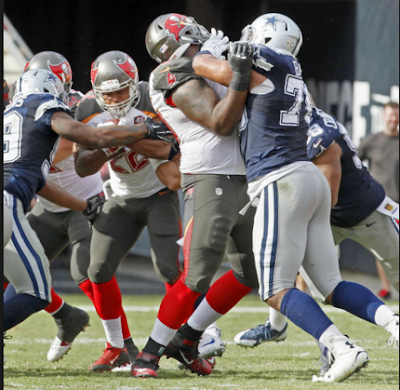 More of the same next week. See you then!