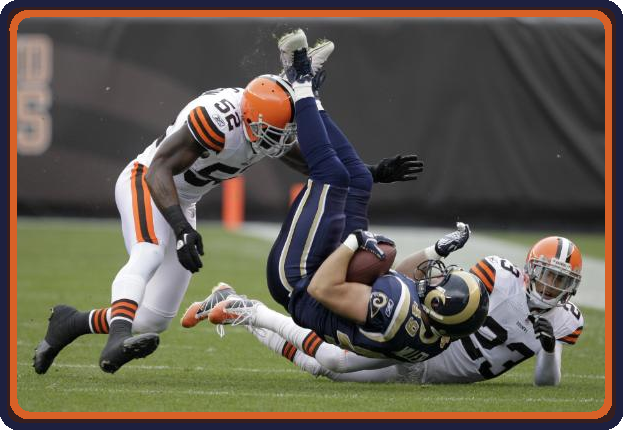 (ed. note: we apologize for the delay in not getting this Uniform Rankings Post up sooner -RH)
We now enter the second half of the season, punctuated by the start-up of the Thursday Night games. If what the NFL said before the season is true, then we are likely not to see the Chargers' powder blues this season. We also had a slight surprise with white at home this week...then again, maybe not. Anyway,

Raiders-Chargers: No surprises, though as we mentioned, it is now not too likely that we'll see SD in the powder blues for 2011. Traditional matchup with the Raiders trotting out white/silver and the Chargers in navy/white.  (Yes if they can't wear powder blues for a prime-time home game, they I don't see it happening. -RH)

Cardinals-Eagles: Again, a couple of NFL old-liners and again, a missed opportunity by the Cardinals to rock red pants with the white jerseys. So they elect to go white/white and the Eagles stay true with green/white. Meh, could have been more.

Bills-Cowboys: Bills looking good in the blue/white with Big D staying true to form in white/quasi-silver. Actually a nice matchup.

Broncos-Chiefs: Another traditional one, with the Broncos going white/white against the Chiefs in the bright red/white uni. Just a little too much white for this old soul to deal with.


Texans-Buccaneers: The Texans rock the white/navy while the Bucs sparkle with the red/white. My flavor today is that red/white works better than red/pewter. I think it brightens up the red.
Jaguars-Colts: White/black go the Jags and blue/white go the Colts. The Jags black pants help this matchup more than had they dressed up in all white. Still, not a real eye pleaser.

Saints-Falcons: Saints going white/black and the Falcs rock the black/white throwbacks. Hmm. I think from a color viewpoint, I would have stayed with the red/white look if I were the Falcons. And normally I would have preferred NO's black pants, but I think the gold pants might have worked a little better here. Not a bad matchup, but I think less might have actually been better here.

Steelers-Bengals: Steelers working the white/yellow get up with the Bengals in black/white. Yes, this works. No black/black for Cincy and I'm glad. Would have been just a little too strong if they had.

Rams-Browns: Rams all blue and Browns all white. I actually like this matchup of extremes. Rams did the right thing with the all blue, more than offsets the Browns all white. Plus the orange helmet just adds a spike of contrast that makes this games work,

Titans-Panthers: Titans in white/columbia blue and, for the first time this season, the Panthers bring out the black/silver look. And ya know what? it works! Had the Panthers brought out carolina blue or white, it would have been a little too blue for me. Winning, in my opinion.

Redskins-Dolphins: We know the Fish like to go all white at home. But, we didn't know that the Skins would go white panted instead of yellow. Too much white and drops this matchup significant notches.

Ravens-Seahawks: Ravens go white/white (Steeler success??) as the Seahawks go with standard quasi-blue/quasi-blue. It is a plus that the Ravens went all white as I think the black pants would not have added anything here. (Muttering) Just wish the 'Hawks would show us the almost never worn navy pants here. I would've given Seattle extra credit!

Lions-Bears: Lions with standard white/silver and the Bears dress up in alternate orange/white. Bears get a lot of groans from rock hard traditionalists for the orange jerseys, but I happen to dig them. Plus you keep the navy helmet and socks, and really, what's the problem? I like it!


Giants-49ers: NY goes white/away gray and Niners of course in red/gold. Somehow, I like this one. Just a little too much red for me, maybe the G-Men in blue socks would have been the spark that would really worked for me. As it is, it is still a nice matchup.
Patriots-Jets: The Jets go white at home (white at home), a nice - er - surprise? Then again, maybe not. The Jets breakout white at home maybe once or twice a season. But, per our white at home research, this makes 4 of the last 5 years that the Patriots (blue/silver) have been the opponent for the Jets' white at home efforts. Had the Jets gone with green trousers, the bonus points would have added up. Too bad.

Vikings-Packers: Vikes go all white and the Pack in the standard green/yellow. Vikes seldom trot out the purple pants anymore and boy, this would have added some big style points. But, no. The Packers' green just adds notches no matter who they play.


So, here are the rankings from the bottom to the top for Week 10: