The Start of The Super Season 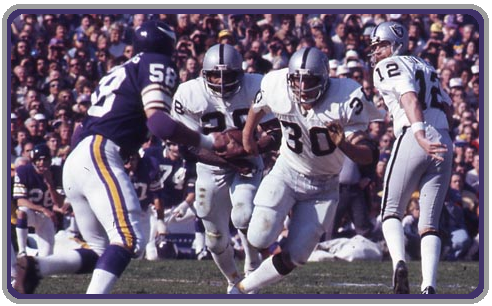 The Start of the Super Season
by Rob Holecko

Way back in the old days, football always ended in December.  The famous 1940 Championship game, the 73-0 rout of the Washington Redskins by the Chicago Bears, was played on December 8.   As the league schedule expanded to 12 and then 14 games the NFL season moved later and closer to January.  The 'Greatest Game Ever Played', the 1958 Championship was on December 29, and by the time the Packers won Super Bowl I in January 1967, it was on the fifteenth.  When the league schedule expanded to 16 games in 1978, and then added bye weeks in the 1990, the Super Bowl was played later and later.  When the 9/11 cancellations in 2001 moved everything back a week, Super Bowl XXXVI became the first to be played in February.

Before the 1978 expansion to 16 weeks, however, the earliest Super Bowl ever in the calendar year was played on January 9, 1977, as the Oakland Raiders, coached by John Madden and with Ken Stabler at quarterback, defeated the Minnesota Vikings in Super Bowl XI.   The Vikings were appearing in their fourth (and to this date, last) Super Bowl, and they lost every one of them. 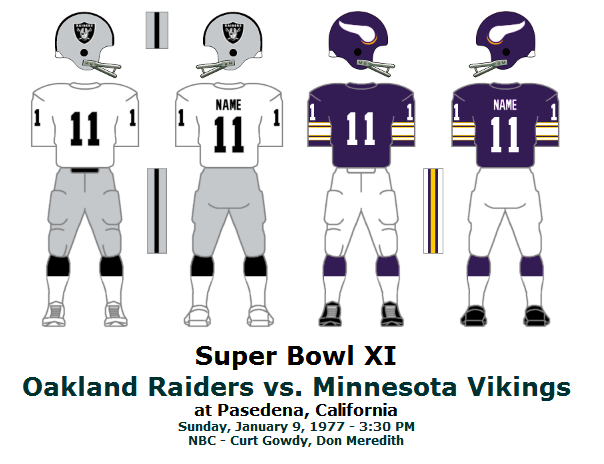 We are happy to add Super Bowl XI to our database, and tomorrow we will debuting a new feature on the website which over the next month will see us add all of the Super Bowls to the Gridiron Uniform Database.


~ ~ ~
A new feature already on the website, you will see you can now click on '2011' and see the team pages for the teams that have already completed their 2011 season.  As the remaining teams in the playoffs lose, we will be added them to this page.  Also coming soon, we will be adding the '2011' graphics to the individual team's year pages linked to the right.
~ ~ ~
Yesterday, we mentioned an "Easter Egg" of sorts here in the Gridiron Uniform Database, an intentional error that I left on the site to see if anyone would notice it.  It isn't anything that will lead to a compromise of the accuracy of our data.  It is more accurately described as not really a "typo", but a "mis-type".  We mentioned we will continue to give hints until someone finds it, and today's hint is: 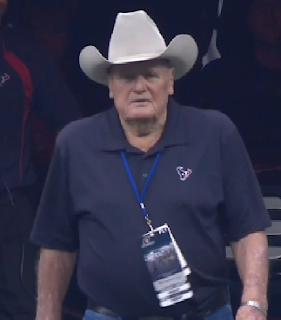 Have a good Monday and enjoy the BCS Championship Game tonight.