Mythbusters I: 1960 AFL Names on Jerseys 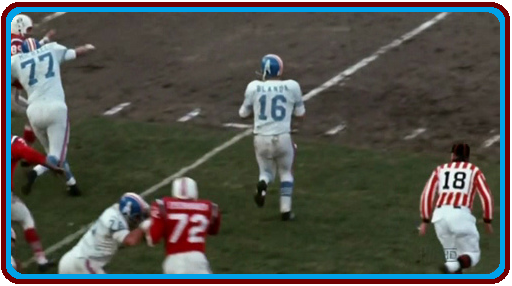 Mythbusters I: 1960 AFL Names on Jerseys
by Tim Brulia 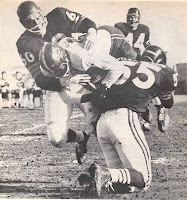 As most of us football historians know, the fourth incarnation of the American Football League started play in 1960.  Eight teams took to the field that year in various colors of uniforms.  To our knowledge, one team began the season wearing something very unusual on their jersey.  The Los Angeles Chargers had their players' surnames stitched on a rectangular piece of cloth positioned above his back jersey number on both the white away jerseys and their home blue shirts.  This was no doubt inspired by what was done by baseball's Chicago White Sox earlier that year, who wore arched nameplates over the back number of their away jerseys.
The names on the back of the AFL teams have been thought of as being league policy from day one of the AFL.  As our research has indicated, this is definitely NOT the case.  The GUD has been able to confirm that at least several teams did NOT start the season with names on the backs (NOB's) of their jerseys.  And it is quite likely that at least one team (the New York Titans) did not have NOB's at all.  Further research almost definitely indicates several teams started the 1960 regular season with no NOB's, and as the season progressed, added the NOB's to both sets of away (white) and home (color) uniforms.  The Buffalo Bills, Houston Oilers and Oakland Raiders are three examples that clearly show this transition.  The Raiders, actually included the given first name of the players as well as his last name.  Although "Jetstream" Smith might have been the exception to this rule!  At this time of this blog, several teams, notably the Boston Patriots, Denver Broncos and possibly the Dallas Texans, are not fully clear to us at the GUD if and when the transition from no NOB's to NOB's during 1960 occurred, if at all. 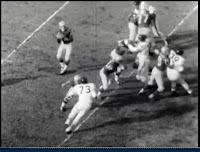 Based on some of my research, I had originally thought that the Patriots had spent 1960 with no NOB's on their home red jerseys, while having them on their backs of the white jerseys for the full season.  But recently, Bill had shared with me his finding from a game at Denver where there is NO NOB.  Bill also showed me some proof that in Boston's (and the league's) Opening game hosting Denver, the NOB's were there!  I had also thought that the Broncos had gone NOB-less for 1960, but there is some indication that the brown and gold clad Broncos had slapped NOB's on their jerseys at some point in 1960, to go along with those infamous vertically striped socks.  To a lesser extent, the Texans do appear to have followed the pattern of the Oilers, Bills and Raiders by starting 1960 nameless and then going NOB during the season, but this is not 100% certain. 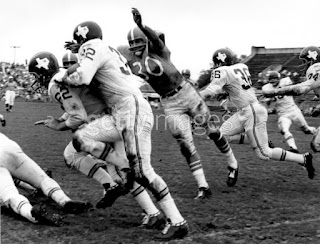 As uniform historians (or "geeks", if you prefer), we want to get every last detail right, including when any uniform detail changes occurred.  Bill has put the call out on our website's forum for help in seeking out when the change from no NOB to NOB happened for each of the teams in question.  We decided to put the shout out here on the blog, where we think it might receive a little more attention.  Whether or not we do get the assistance from those of you willing to do a little "dirty work" on our behalf, my next research pilgrimage to the newspaper reading room at the Madison Building of the Library of Congress in Washington, DC, will be dedicated to the 1960 AFL NOB cause.  I have tentatively scheduled the trip for late March.  I hope to either confirm your findings or discover gems of my own to further our cause.

One thing is certain.  Starting in 1961, every available photograph of a regular season AFL game clearly shows NOB's on all players (well, there are a couple of exceptions here and there).  Though none of us at the GUD are in possession of an AFL Rule Book from 1961-1969, it certainly does look like the AFL mandated NOB's for all regular season and playoff games.  It just wasn't the case in 1960, like the history revisionists would have you believe.
Stay tuned for further developments and our next episode of "Mythbusters!"

Coming up in the next couple of days, our Larry Schmitt will have a profile of another Pro Football Hall of Fame Class of 2012 inshrinee, Willie Roaf.