Timmy B returns from Canton 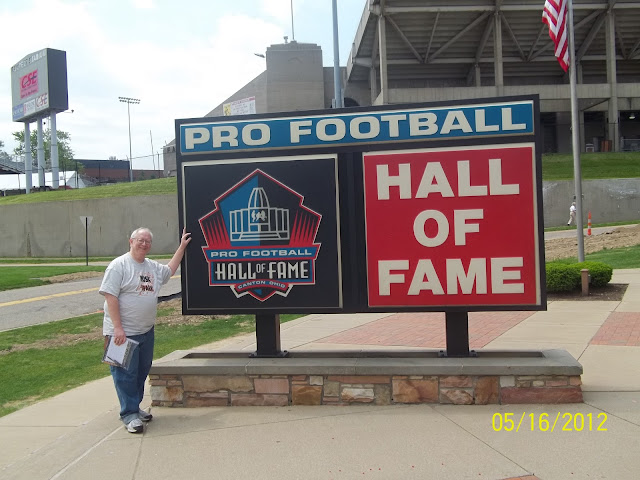 Last week, May 15th and 16th, I spent two days of research and touring the facilities at the Pro Football Hall of Fame in Canton, Ohio.  As reported last week in this space, my objective was to find as much information as possible regarding uniforms worn by National Football League teams from our missing uniform era of the Gridiron Uniform Database (GUD), 1920-1932.
I had said that I had no idea how (un)successful I would be.  As it turns out, I was able to track down roughly 30% of the uniforms of the era.  My most successful season was probably 1931, where it looks like I found information on 6 of the 10 teams that season.  My least successful season would have to be 1924, where I was only successful in nabbing 2 of the 18 teams. 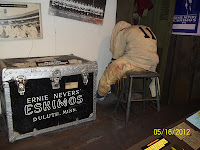 Jon Kendle, Researcher at the Hall, was more that kind enough to assist me with the project. All day on the 15th, he dug through the photo archives of the Hall for the team photo files for the 1920-1932 years.  I had to wear a pair of white gloves as I sifted through the files in search of these ancient pictures.  The files were listed by team.  There were also negatives mixed in with the available photos.  Alas, many of the files were empty.  But still, I was able to gather a lot of information.  Unfortunately, I was not allowed to take pictures of the material that I sifted through.  However, I was able to log descriptions of the photos as best as I could.  In due time, we hope to bring you the results on the GUD. 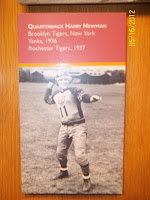 I also went back on the 16th to finalize my findings, and came across a couple of surprises.  We hope to include these as well in the coming days and weeks.  I thanked Jon for his help and then I did a tour of the Museum itself.  It's $21 for a tour of the facility.  I took as many uniform-themed photos as I could, most of which accompany this blog.  Two interesting items of note: One was the "Super Bowl Experience" where there was a "tease" of training camp footage from years past and the 2011 season, with some regular season footage from the 2011 season up to the Conference Championships.  Then we entered the theater for a 25 minute feature from NFL Films, exclusively for the Hall, of Super Bowl XLVI.  It was done as only the creative geniuses at NFL Films could provide.  The seating at the theater was movable.  We saw all of the stuff of the lead-in to the Big Game and when it was time for kick-off, the seating area moved from one screen to another.  The exit led us to a display of all 45 Super Bowl rings.  Talk about bling! 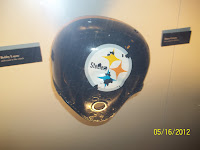 The other item of interest came near the end of my tour.  A couple of volunteers lugging around a large trunk happened by where I was taking a break. They said, "Are you here for the helmet presentation?" As I muttered "no," they said, "Too bad!!"  They opened the trunk and pulled out about 10 helmets, some very old, some reproduced and some that were experimental.  It was an enlightening 15 minutes of the history of the pro football helmet, from when it was just a thick woollen cap, to a projected model that was still on the drawing board, that featured safety features to deter concussions as much as possible.

The Hall is undergoing yet another expansion that will culminate next year, to coincide with the Hall's 50th anniversary.  It is worth the while of any football fan, to visit this facility. 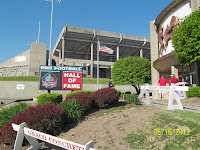 Getting back to the task at hand.  To be honest, because of the rather ship-shod way that the NFL kept track of things before 1933, and based on my research last week, it will be a most monumental task to have a complete database of uniforms from before 1933.  I think it could be possible to have complete years back to maybe 1928 or so.  But beyond that...

Still, we think this will be a great step forward as we go backward more in time.  Again, I wish to thank the staff, volunteers and Jon Kendle at the Hall for all the courtesies extended to the GUD.

To view all of Tim's pictures from the Pro Football Hall Of Fame trip, click here.