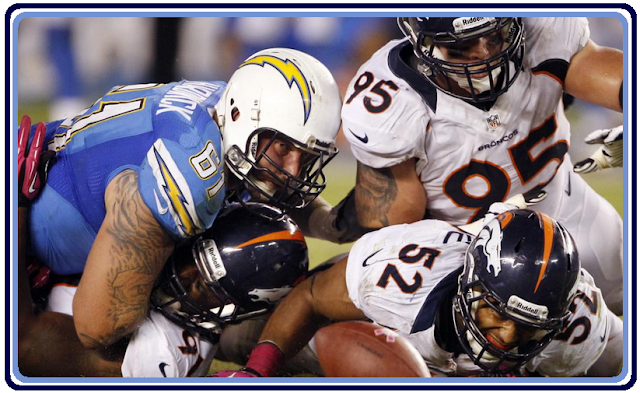 In a minute, the Week 6 rankings.  But first, here is Rob to tell you a bit about things going on here at The Gridiron Uniform Database. 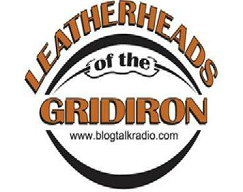 Thanks, Tim.  First I want to publicly recognize here in the blog your appearance on the Leatherheads of the Gridiron's podcast, "Gridiron Greats."  Tim (who was introduced as the "owner" of our site) did us proud in an almost 45-minute interview where he talked with hosts Bob Swick and Joe Squires about our site and other interesting stuff like his collection of Super Bowl game programs.  (He has every one)  The show is geared towards memorabilia and collecting, but it was an interesting discussion none-the-less.

You can download the mp3 of the appearance here.

Another thing I wanted to mention, in sending me the commentator listings for this week from his research over there at The506, (where Tim is one of the curators of all of the historical announcer information that you see here on our site), Tim also included the game announcers from NFL games played 50 Years Ago this week in 1962.  (I swear, we're not trying to steal a similar idea from someone over at that other site.) 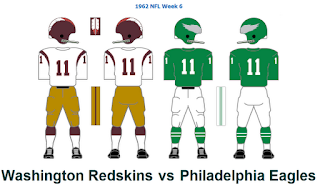 As you all know, while we like to think that we have already included a quite impressive amount of information of pro football uniforms from 1920 to the present, we have easily 80% of the task still to go.  A lot of the time-consuming entry of weekly and matchup pages is simply just going to take a lot of time.  So we are going to continue to try making headway towards our ultimate goal of completeness by adding the 1962 season, beginning with the current week 50 years ago, and working forwards and backwards from that point.

This week, I have added 1962 Week 6 (and AFL Week 7), and next week, we'll shoot for adding Weeks 5 and 7, and continue to build from there.  Also, if you go to the 1962 season page, you'll now see links to the weekly pages, and we will be adding these to the other years in coming days as well.  I know there are a lot of older matchup pages that I have added to the database, but frankly, there is no easy way to see how they are indexed and which ones are included, so I will be adding these 'weekly indexes' at the top of all of the year index pages in coming months.

Now back to Tim with the Weekly Uniform Rankings.

#14. Colts-Jets: IND in all white, NYJ in green/white. The safe way to go for the Jets. I would have preferred the Jets in a green/green get-up. So, this then becomes a rather mediocre matchup. Plenty of white, if you like that.

#13. Bengals-Browns: CIN in black/white and CLE in all white. Back in week 2, these two played each other with the Bengals doing a rare turn of white at home (WAH), forcing the Browns to wear brown jerseys for the first time in the regular season since 2010. This time, the Browns return the favor. Lots of orange and the Bengals play it conservative with the white pants instead of black pants. It's OK.

#12. Rams-Dolphins: STL in all blue, MIA in all white. Mono a mono from head to calf. It's a so-so look. Were the Rams to go blue/gold and the Dolphins to go white/aqua, OMG...But alas. Still some good color here, blue, gold, aqua, orange. Just not enough of it here. 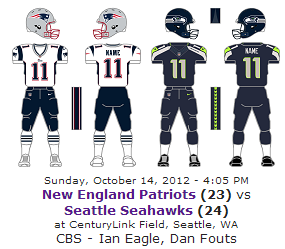 #11. Patriots-Seahawks: NE in white/navy, SEA in all navy. While I have bought into the Seahawks new sweetness, it doesn't work against the Patriots standard white/navy away combo. Seattle could have busted out gray pants, and that would have helped. Just too much navy leaves me blue.


10) Bills-Cardinals: BUF in white/blue, ARZ in black/white. WHA...? Bills in BLUE pants?? Yay-yuh! Oh yeah! Woo-hoo! This is the bes...oh wait, Cardinals in black jerseys instead of red??? Um...never mind. Next, please.

#9. Lions-Eagles: DET in white/silver, PHI in green/white. This looks a little too much like a Cowboys-Eagles matchup, with the Eagles fanbase normally in venom mode. With the Lions in town instead, I think this game would have been better served for all involved if the Eagles would've gone WAH to force the Lions to rock honolulu blue. Good, not great.1

#8. Cowboys-Ravens: DAL in white/mint, BAL in purple/black. Cowboys in the normal mode with the Ravens again rocking the purple and black. Yup, I like it. When the Ravens brought the NFL back to Baltimore in 1996, this was what they wore at home. They have resumed this look in recent years and I think it fit the team image to a "B". Blends well with the Cowboy gear. 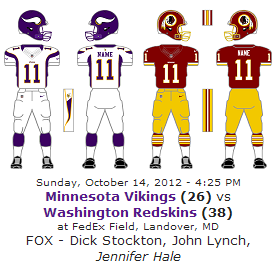 #7. Vikings-Redskins: MIN in all white, WSH in burgundy/yellow. This one works. Vikes in the standard purple trimmed whites and the Redskins continue to spread good cheer with the burgundy-yellows. A very nice look here.

#6. Steelers-Titans:  PIT in white/yellow and TEN in columbia blue/navy blue. Nice color contrasts here. Black, yellow, and two shades of blue. Both teams in three separate colors for the helmet, jersey and pants. May not be the best matchup, but an upper echelon one for sure.

#5. Giants-49ers: NYG in white/gray, SF in red/gold. Nice load of reds in this one. Could have been a pinch more blue here, but the red is nice and blended with good doses of blue, gray and gold. This is traditional and traditionally good.

#4. Raiders-Falcons: OAK in white/silver2, ATL in red/white. Really gave the bum rush to the Falcons last week, but this week is much nicer with the Falcs in the red, and it's a good contrast against the rather muted Raider aways. Dig it.

#3. Packers-Texans: GB in white/yellow, HOU in dark blue/white. A better than average matchup. No surprises and none needed. A good blend of good colors, white, green, yellow, dark blue and good ol' battle red. Certainly goes in the win column.

#1. Broncos-Chargers: DEN in all white, SD in powder blue/white. One of those games where the team that wears a very popular (and justly so) alternate that will ratchet up the matchup no matter what the other team looks like. This is certainly the case when the Chargers - all too rarely - break out the powders. The Broncos are the opponent and are wearing the navy based whites with the touch of orange. 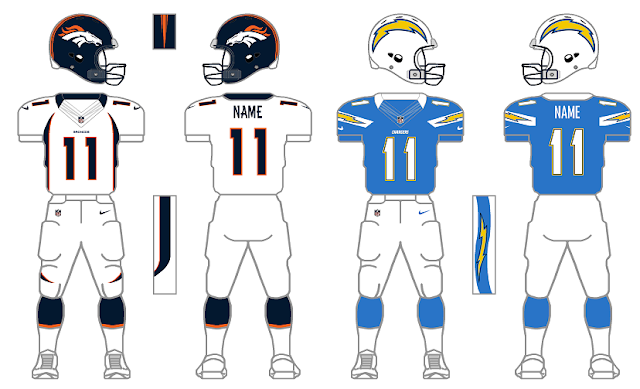 Back next week. Till then, Peace Out.4
1- Could have been worse, they could have dressed like this.
2- Whenever I see Oakland in road unis in a dome, I think of this game.
3- Like all of the Weekly Rankings, the opinions issued in the Weekly Rankings are only those of Tim Brulia, and not necessarily in agreement with everyone's opinion at the GUD. I (Rob) happen to prefer my Bucs in white pants and hate the pewter pants. The white/white is fine, but I happen to think their best look is the red/white, which they seldom wear. Still he put the Bucs at #2. Also, I would have had the Bills-Cardinals much higher. Even with the Cardinals' BFBS (which I actually don't think is that bad (gasp!), the debut of the Bills' blue pants would have easily been Top 5 and probably #1 for me.
4- What's with the footnotes? I don't know, maybe I've been reading too much Bill Simmons lately.