Today we begin the 4th group of 'season-enders.'

Was the uniform match-up that we got for these games better than the alternative? We shall continue to see. 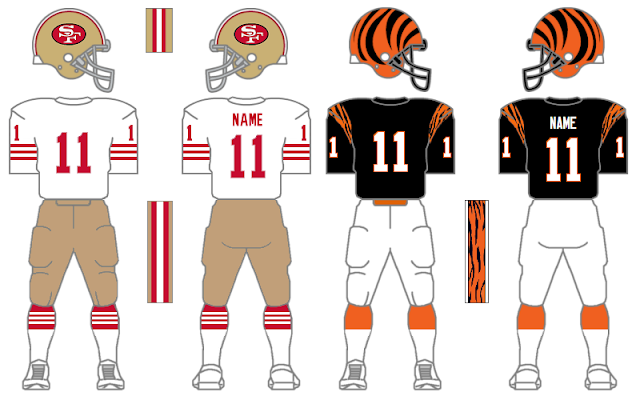 ACTUAL: Inside the haze of the Pontiac Silverdome, this was a great looking match-up. I can remember how loud the announcements for player introductions for the Bengals were compared to that for the Niners.  Only 260 miles separated Cincinnati from suburban Detroit meant that Bengals fans showed up in force. Alas, it wasn't enough and a dynasty began. 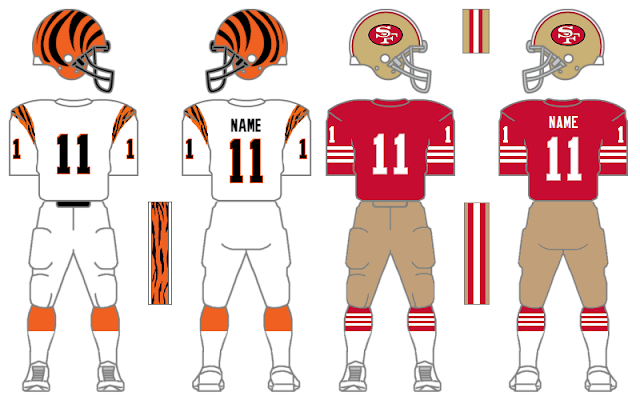 ALTERNATE: Good by itself, but comes in second in a two-horse race.
EDGE: ACTUAL 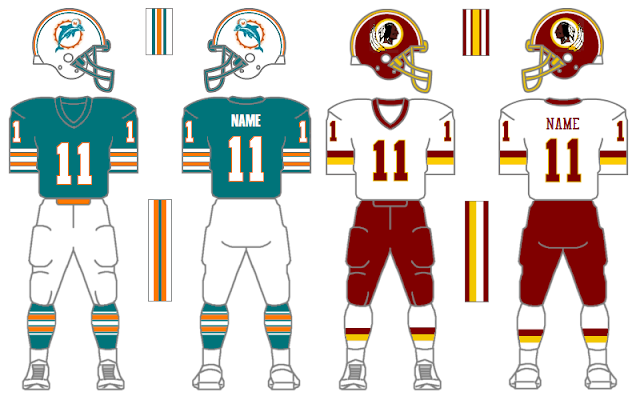 ACTUAL: Washington wearing their home whites allowed the Dolphins to use their aqua jerseys. One of the better combinations of the first 17 years. 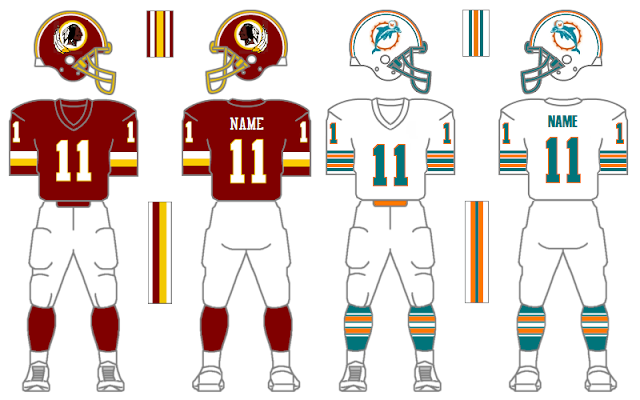 ALTERNATE: I just can't envision John Riggins busting around the left end on 4th-and-1, stiff-arming Don McNeal into the Rose Bowl turf, and rumbling down the sideline for the dramatic touchdown while the teams are in these uniform combos.
EDGE: ACTUAL 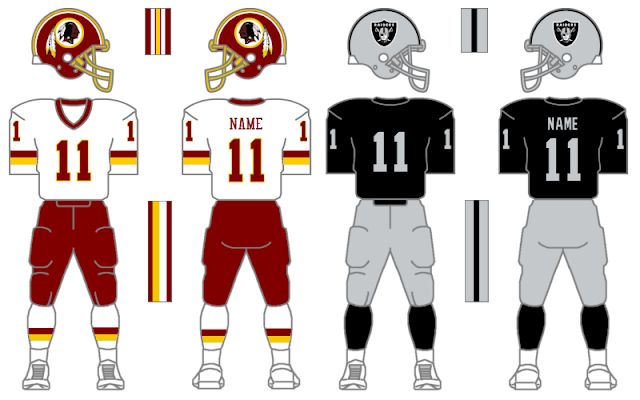 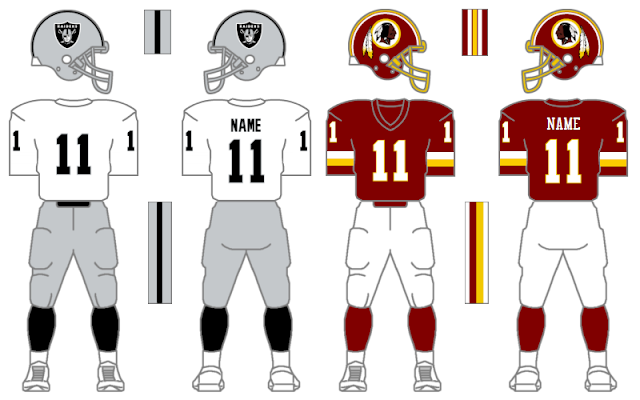 ALTERNATE: Um...not quite so much. Like the Colts/Cowboys match-up, chances are we'd likely never see this particular combination.
EDGE: ACTUAL 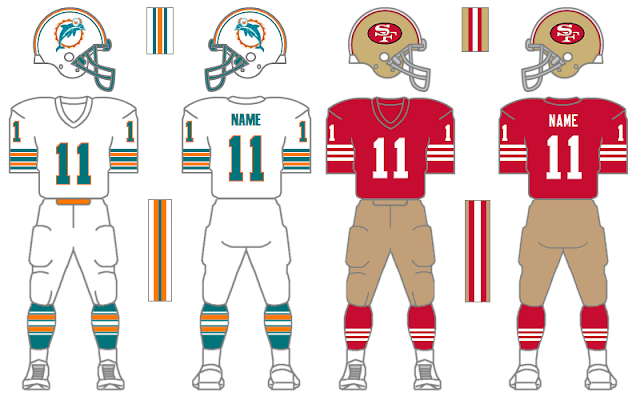 ACTUAL: In a vacuum by itself, this combo wasn't too bad. However... 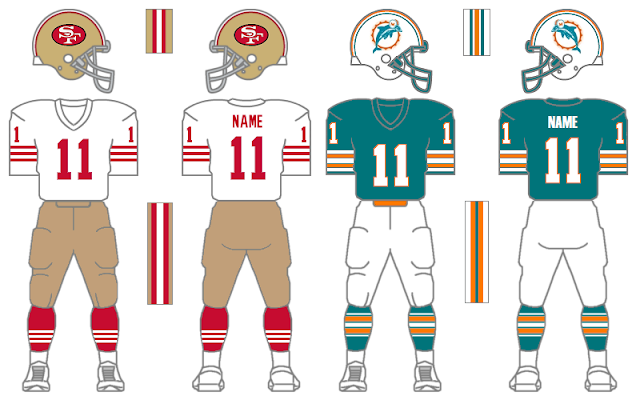 ALTERNATE: ...having a chance to get the Dolphins in aqua would definitely been the way to go if the chance had been there.
EDGE: ALTERNATE 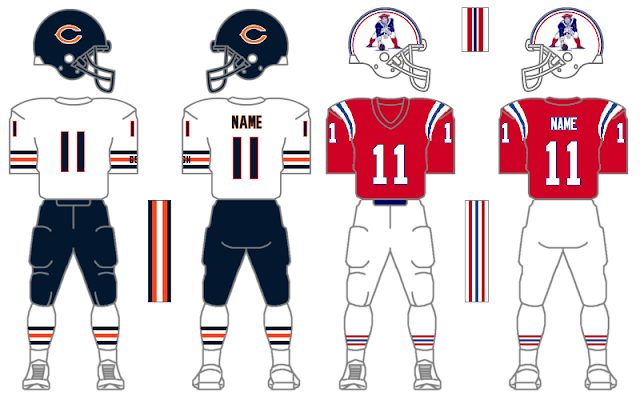 ACTUAL: The only redeeming quality for this match-up was that it was the opposite pairing from a Week 2 encounter between these teams. Plus, I never cared for the white monotard look of New England's pants and socks even back then. 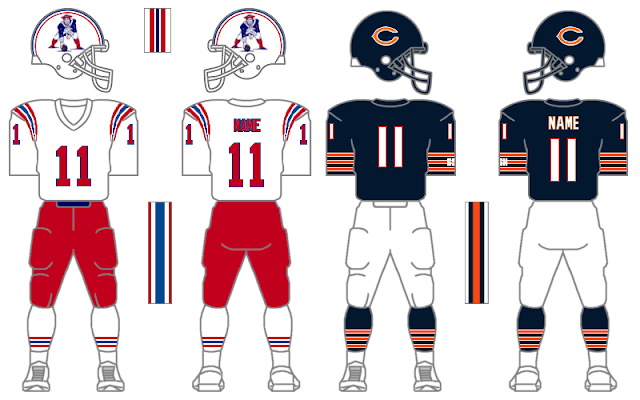 ALTERNATE: The Bears deserved to wear this combination. They took it out on Tony Eason and Steve Grogan all day.
EDGE: ALTERNATE

Despite capturing the last two games in the series, the ALTERNATES still come out on the short end by a score of 3-2 by my count.  This puts the combined totals at ACTUAL - 13, ALTERNATE - 7 on my scorecard.

Don't forget to offer your input via voting on this set of five.
Return next week for games 21-25.
Bill Schaefer