Here they come, for the 11th time.

15) Falcons-Buccaneers:  ATL in white/white, TB in red/pewter.  More of the bland, I'm afraid.  Red in acceptable doses, and black and pewter compliment well, but placed together, these two sets just simply come up short. 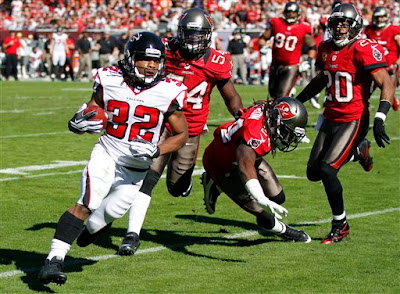 14) Jets-Bills:  NYJ in white/white, BUF in blue/white.  Lots of white for all.  Jets continue to eschew (who "eschews" anyway??) any semblance of green, like pants and/or socks, when wearing white shirts this season, and even with the Bills in blue, it cannot help.

13) Cardinals-Jaguars:  ARZ in white/white, JAX in black/black.  Bummer.  Cardinals could have worn red pants, Jags could have worn teal jerseys.  Stark contrast here.  But, the red-heavy white jerseys of the Cardinals does play somewhat well off the Jags teal sleeves.  Not one of my faves for the week.

12) Raiders-Texans:  OAK in white/silver, HOU in navy/white.  Another mundane matchup.  Raiders with their somewhat generic look in white and the Texans in a good set of navy and white. So, not a visually appealing game from here, though some may certainly dffer.

11) Colts-Titans:  IND in white/white, TEN in columbia blue/white.  The Titans, since they formed their current identity in 1999, have worn a possible 8 out of 9 uni combos.  At last, they wore the ninth and final combo, light blue jerseys and white pants.  And it would have worked against virtually any other team but the Colts. Just a lot - a lot - of blue, and plenty of white.  While I commend the Titans for breaking out this unique combo, it just comes up short against the Colts in the all whites. 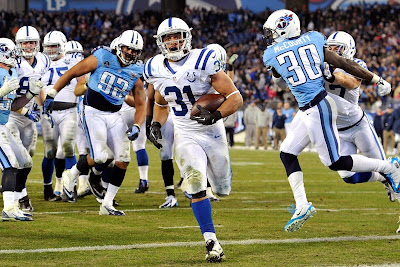 10) Redskins-Eagles:  WSH in white/yellow, PHI in green/white.  I know that the burgundy pants have been mothballed, but I think sporting them here would have a bit of dash for this encounter.  Eagles greens make this palatable.

9) Chargers-Dolphins:  SD in navy/white, MIA in white/white.  With the Dolphins in hopeless all whites, it's up to the Chargers to hold the fort, and surprisingly...they do. As I eyed clips from this game, it's actually a pretty good matchup.  Add a pinch of powder blue, yellow and orange, it's enough to overcome some serious whiteness.

8) Patriots-Panthers:  NE in white/navy, CAR in black/silver.  Aw, I was so hoping to see the Panthers in that all black look with the carolina blue socks.  Tonight wasn't the night for that, but it wasn't bad.  A spinkling of red and carolina blue accessorized well. A moderate dose of silver, certainly not overkill.

7) Packers-Giants:  GB in white/yellow, NYG in blue/gray.  Predictable, but palatable.  Yellow, green, blue, gray and a sprig of red makes this a better than normal matchup.  Not much else to add.

6) Ravens-Bears:  BAL in white/black, CHI in throwback navy/white.  This game will be remembered more for the lengthy weather delay than the unis worn.  But the Bears in the dull but powerful 40's throwback with not a speck of white on the navy jerseys and the Ravens with sleek black slacks make this matchup a rather eye appealer to me.

5) 49ers-Saints:  SF in white/gold, NO in black/black.  So so glad the Saints went all black for this one.  It just would have been way too goldy for me had the Saints went with the metallic pants.  The all blacks swing nicely off the gold, white and red trimmed Niners.  A top half matcher.

4) Browns-Bengals:  CLE in white/brown, CIN in alternate orange/white.  I know this game created UGH's cuz the Browns rocked the ugly brown pants, but actually, this detail really pumped this matchup very well. With the Bengals dressed in orange, it was a plus for a good display of color, even if it was a little jarring to others.

3) Chiefs-Broncos:  KC in white/red, DEN in orange/white.  Aaaah, so nice.  I think I've found my second favorite uni, the Broncos in orange. What's my favorite? I think if you read these installments enough, you'll be able to tell, but I digress.  With the Chiefs in the dynamic white/red combo, this is a sweet visual for me.


2) Lions-Steelers:  DET in white/silver, PIT in throwback yellow-black/khaki.  Sorry, Lions, but almost all of the attention is focused on the Steelers in the "1934" (but as we all know they're actually 1933) throwbacks.  For the third (and hopefully NOT the last) time in two years, the Steelers wear what many call the bumblebee jerseys and they are so far outside the box, that they work wonderfully.  If the Lions would have petitioned the NFL to wear their honolulu blue tops, WOW. They didn't, but it's still a visual thrill. 1) Vikings-Seahawks:  MIN in white/purple, SEA in navy/navy.  So pleased with the Vikes to use the purple pants so liberally this season and when going against the Seahawks in all navy, I get all happy.  The trim colors go so smoothly as well. A dandy matchup. 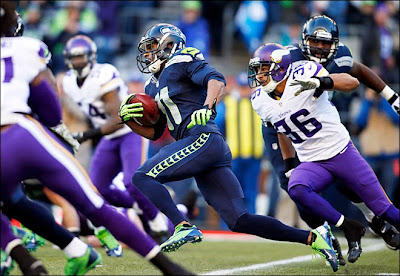