Football's longest week has come and gone.  Here are the rankings:

16) Dolphins-Jets:  MIA in white/white, NYJ in green/white.  Blah.  A ton of white.  A load of boredom.  Almost nothing excites me about this one.  Had either/both side(s) slapped on a pair of dark pants, I think I could have worked up a little excitement for this matchup.  At least the Jets wore green socks.


15) Cardinals-Eagles:  ARZ in white/white, PHI in black/white.  After the red pants reappeared last week to much joy from this reporter, I was a wee disappointed that the Cardinals didn't pair the reds with the white jersey for this game.  And with the Eagles deciding to go with black jerseys, it was a meh matchup.  While I don't find the Eagles black tops as gratuitous as much as the...Cardinals in black, I still think it's unnecessary. So, this matchup goes down several pegs.

14) Buccaneers-Panthers:  TB in white/pewter, CAR in black/silver.  Mixture of metals (silver/pewter), and a good dose of black, but it is off-set by sharp trim colors of light blue, red, and a sniff of orange.  Panthers may be running out of time to cue the all blacks, and it might have played well here, but not necessarily needed.

13) Steelers-Ravens:  PIT in white/yellow, BAL in black/black.  Capping off Thanksgiving were these bitter rivals.  Ravens decide to go jet black for the occasion, and I'm not too thrilled.  I much prefer the Ravens in the purple/black combo, or even the black/white combo.  The all black is just too much, even for the Steelers in the neat white/yellow.

12) Giants-Redskins:  NYG in white/gray, WSH in burgundy/yellow.  Just a bit much on the red tones here.  The Giants blue brain holders and the Redskins yellow slacks do just enough to keep this from a ho-hummer. I did a visual in my mind of the Giants in white pants and the Skins in white pants also, and that would not have helped..  So, this is not that bad after all.

11) Saints-Seahawks:  NO in white/black, SEA in navy/navy.  Well, I'm a bit disappointed.  The one time I'd have like to seen the Saints in gold trou, they go black.  The Seahawks in all navy is a look that has grown on me and keeps doing so.  But not enough to overcome the Saints in black pants.

10) Rams-49ers:  STL in white/white, SF in red/white.  Maybe I'm getting fogeyish as I am well in middle age, but this week, the Rams all whites going up against the Niners beautiful red and gold blend is a really boffo one from these eyes.  It lets the home team hog the goodness without getting completely lost.  Nothing at all against the navy pants of the Rams, but I think this week, the white pants were a good selection.

9) Jaguars-Browns:  JAX in white/black, CLE in brown/white.  For once, I think the Jags look works.  Paired up with the Browns in a more traditional uni (brown tops and white bottoms), and wearing their black pants, even the Jags' goofy helmet works in this one.  I find this one palatable.

8) Patriots-Texans:  NE in white/navy, HOU in navy/white.  A good, though not great, pairing.  These are good looks by both teams, nearly classic, unchanged for over a decade.  And they work well when paired up.  Any complaints might be the navy heavyness, but sleek uni designs and color placements belp the cause. 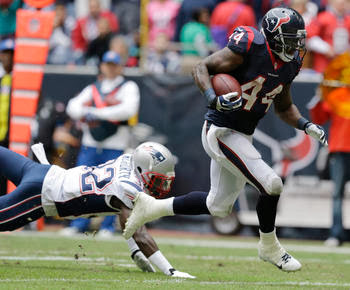 7) Falcons-Bills:  ATL in white/white, BUF in blue/white.  Coming atcha from Toronto, and while I normally slam on the Falcons mundane all white combo, it actually seems to work when paired with the Bills rather nifty blue and white look.  Still a lot more white than I'd like, but the black domes of the Falcons match with the white Bills helmets and not to mention the great blue jerseys, this is actually appealing to me.

6) Broncos-Chiefs:  DEN in white/white, KC in red/white.  Not a stunner, but a good show nonetheless.  Navy and red dominate, but enough orange and yellow to accessorize with much appeal.  A uni matchup seen many times since 1997, and it really never gets old.

5) Packers-Lions:  GB in white/yellow, DET in honolulu blue/silver.  Typical Turkey Day fare, with no throwbacks, as in recent memory when these two hook up for this occasion.  Still, it is a classic matchup, with the silvers, yellow, unique blues and greens.  Pack with the white and Lions with the blues,  looks quite good.

4) Raiders-Cowboys:  OAK in white/silver, DAL in blue/silver.  Well, when the Cowboys announced that they would wear their normal blue jerseys for a genuine home game, it generated immense buzz in the uni geek world.  As it should, for the Cowboys hadn't worn regular blue jerseys at home since December, 1963.  And it look good.  The blues are underrated and underused.  A lot of silver on both squads to be sure, but the smart look by the Cowboys will hopefully bring out the darks at home a little more in coming seasons. 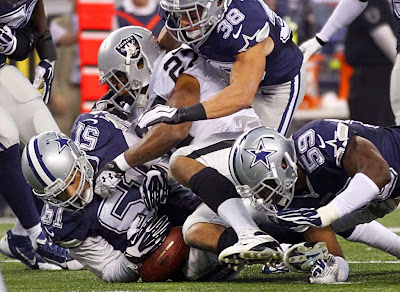 3) Bears-Vikings:  CHI in white/navy, MIN in purple/white.  Boy, something about those NFC North teams and their unis that are just smashing.  This is a great example.  Navy, purple, orange, yellow, in the right fashion.  Not too much of anything here. Well worn, well trimmed and well played.  Nice on the eyes, guys.


2) Titans-Colts:  TEN in white/navy, IND in blue/white.  A few weeks ago when last these teams met, the Titans wore the last possible combo in their closet, and I sorta panned it.  This week against the same Colts, the Titans wear a more common combo, the white jersey and navy pants, and I really think this is their best combo when the Colts wear traditional blue.  Blue dominates, but with tones that range from light to medium to dark, it's winning.

1) Bengals-Chargers:  CIN in white/white, SD in alternate powder blue/white.  Yay-yuh!  Powder power!  When the Chargers rock the powder blues, a uni seemingly loved by everyone...BUT the owners, the GUD rankings looks favorably on the game automatically moves up the ladder.  No exception here as the Bengals offer their whites plus orange socks to compliment.  For sure, a plus for me. 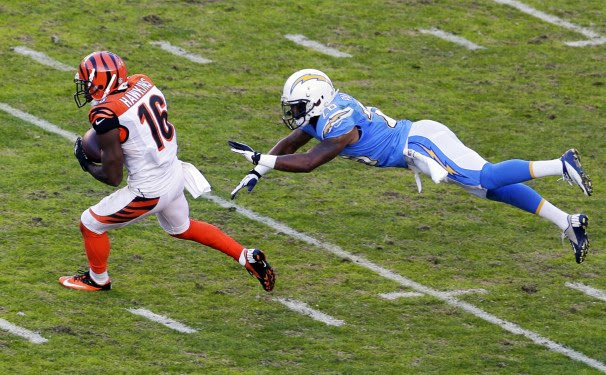 Till next time, take care and remember, you can never watch too much football!