The season is in full swing and so are we.

16) Raiders-Patriots: OAK in white/silver, NE in navy/silver. Not a fan. Loads of silver, navy and black and a whiff of red. Just puts me to sleep. 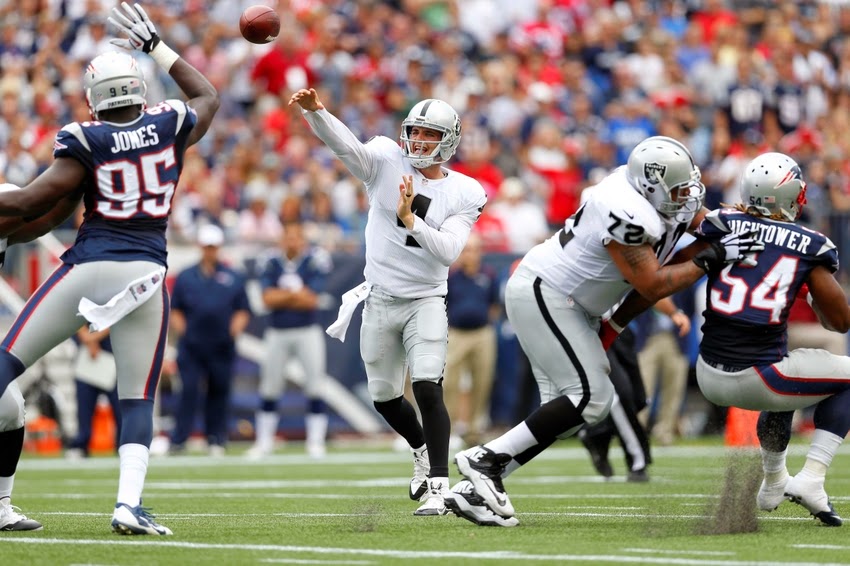 15) Texans-Giants: HOU in white/navy, NYG in blue/gray. Oh what those red Texans socks wouldn't do to spark this matchup aplenty. Not to be. It isn't bad, enough red on the Texans and Giants to help some, but really, not enough. Lower half of the pile.

14) Titans-Bengals: TEN in white/white, CIN in black/white. Urk! Titans trot out the all-whites for the first time since Week 9 of 2006 (discounting a 2009 AFL Legacy throwback). Of their nine different combos, this is my 9th favorite. The Bengals play off of this correctly with the white pants. All-white versus all-black would have been too sharp a contrast for me.

13) Chiefs-Dolphins: I guess many of us were misled that when the Dolphins called for an "aqua out" from their fans, we were going to see a full on aqua combo by the South Florida squad. Not so. The usual banal all white was worn, but the Chiefs in their bright red jerseys, helped this slightly.

12) Chargers-Bills: Old AFL antagonists square off here. About a decade ago, would have loved the navy helmeted Chargers going against the red lidded Bills. But it's 2014, and both have returned to the white headed palette. So, the gear has to stand out. And it does, sorta. But the blues dominate a little much. Not quite enough yellow or red.

11) Colts-Jaguars: IND in blue/white, JAX in white/white. Black pants on the Jags might elevate this one, but not quite enough. Colts in the blues, however, are nice enough to keep this one from the bottom drawer.

10) Redskins-Eagles: WSH in burgundy/yellow, PHI in white/white. I guess the Eagles green pants - like the green jerseys - are in need of color repairs as well. Thus, we have again a dull all-white look for Philly. The Redskins sweet burgundy over yellow thus carries the load. And, it's a bit of overload.

9) Broncos-Seahawks: If ever there was a chance that we'd see the Seahawks in WAH, this would be the one. The Super Bowl XLVIII rematch where the Seahawks, wearing white over navy, won the coveted Lombardi trophy. But perhaps, the Seahawks, obviously aware that they are the lone team that has never worn white at home, weren't about to give up that unique claim. And so, navy dominates, with the grays, neon greens and oranges reduced to trim status.

8) Buccaneers-Falcons: TB in white/white, ATL in red/white. 00's style meets 10's style. I like the colors, red, black, orange, pewter. Modern, and maybe a little out there when paired together, but it seems to work for me. 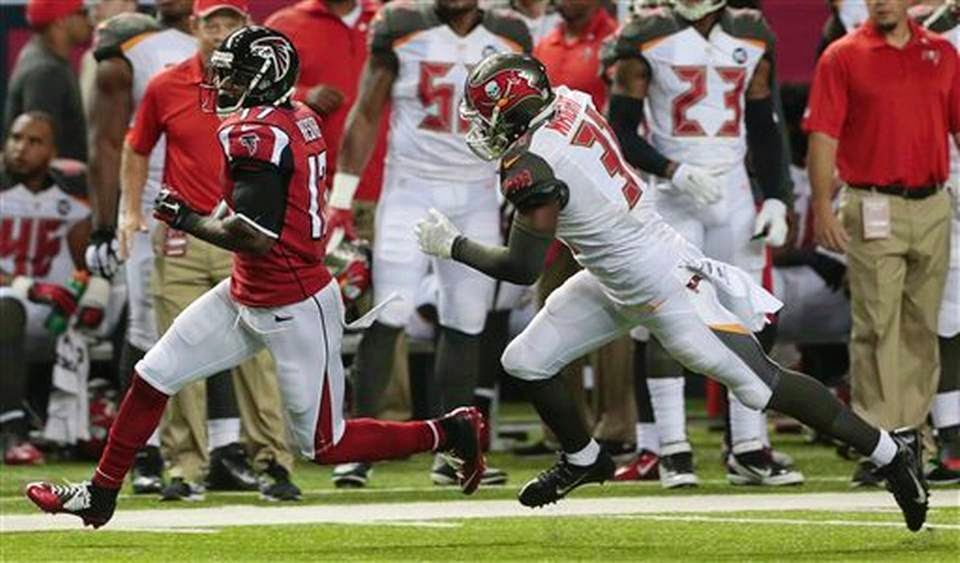 7) Ravens-Browns: BAL in purple/white, CLE in white/white. In recent years, Browns can't seem to make up their minds on whether to wear white jerseys at home all the time, some of the time or none of the time. So with this being at least a some of the time years, I'd have sorta like to see the brown pants, particularly for this matchup. But alas, no. The orange lid does pop a bit against the Ravens purple, black and white, though.

6) 49ers-Cardinals: SF in white/gold, ARZ in black/white (alternate). Usually I'd drop the Big Red's blacks like a ton of bricks, but the black actually plays off rather sweetly against the gold and red trimmed Niners. Red is an accentuating color in this matchup as opposed to dominant. So, it moves up the scale, rather than down.

5) Vikings-Saints: MIN in purple/white, NO in white/black. I like this one and it's probably because the Saints chose to go with the black pants. Makes for a little more color, so to speak. Purple, yellow, gold and black. Not the most variety of color, but it does stand out a bit from the crowd.

4) Packers-Lions: GB in white/yellow, DET in honolulu blue/silver. Gotta give the NFC North its props. Traditional but quite colorful. Even though this is a rather mundane matchup. Yellow, silver, green, and that unique shade of blue adds up quite well.

3) Cowboys-Rams: DAL in navy/silver, STL in white/white. Cowboys in dark jerseys for two straight weeks! A part of me wishes the Rams would have worn their dark pants, but aesthetically, they made the right choice by going full on white. This showcases the Cowboys in their darks while maintaining a sleek look that emphasizes the Rams helmets. Nice one. 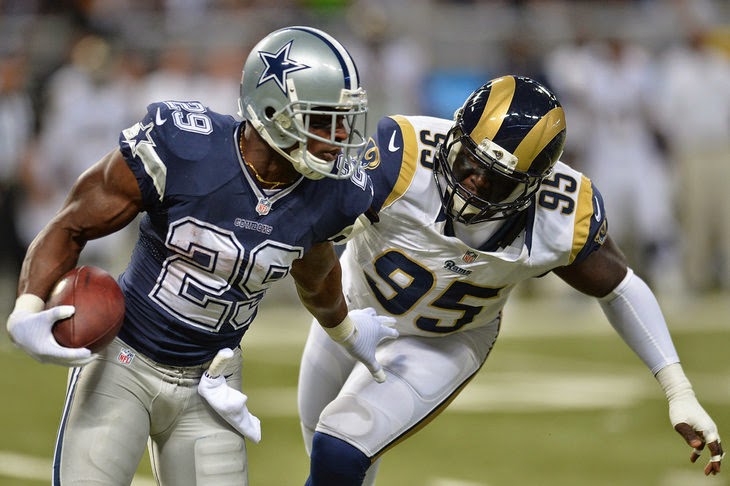 2) Steelers-Panthers: PIT in white/yellow, CAR in carolina blue/silver (alternate). A great time to whip out the pale blues for the Panthers. This is the combo that many of us wish would be the primary and not the alternate. It's paired against the Steelers triple color combo of black helmet, white jersey and yellow pants. A smooth ride. 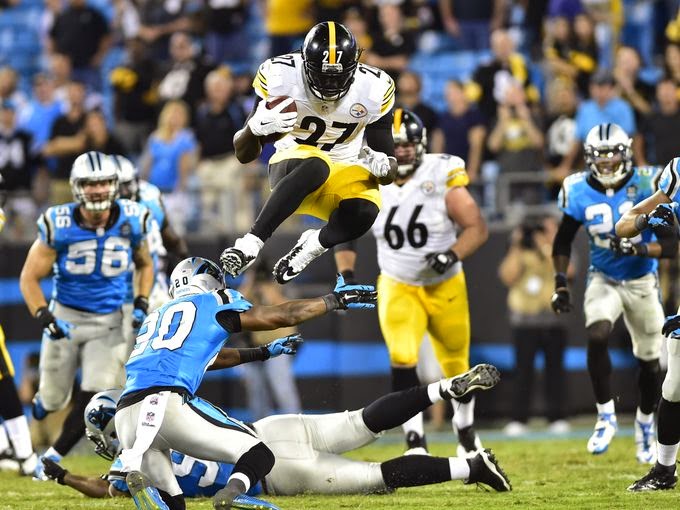 1) Bears-Jets: CHI in white/navy, NYJ in green/white. As you know, I berate the Jets in all white. Yuck. But when they break out the green jerseys, and wear the outfit against the Bears, and everything contrasts (navy helmet/white helmet, white jersey/green jersey, navy pants/white pants, white socks, green socks), it's a winner. 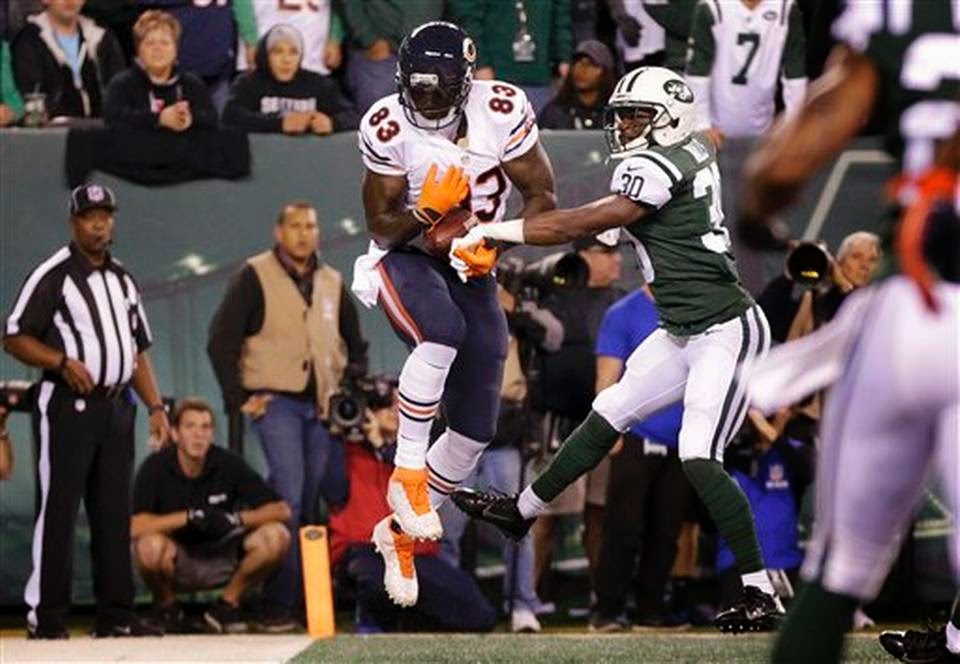 Thus closes out a rather sub-par uni matchup week. Hopefully, a little more excitement will come our way next week. See ya then!