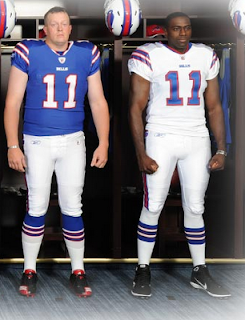 I'm not normally one who praises or criticizes a team's unifoms. They are what they are and I usually pass judgement on them as they are a sign of the times. So, with that in mind, I will take a deeper look into the NFL's first overhaul of a uniform since the 2009 Lions.

The Bills have changed everything except the cleats, which remain black.

The helmet: The red shell is gone for the first time since 1983. The helmet returns to the white that was worn from 1962-1983. The charging blue buffalo with the red side streak (or as the press release calls it, a "red speed stripe") remains. The helmet stripes are blue/red/blue, with a razor thin navy blue between the red and blue stripes. Per the press release, the stripes will widen from the front to the back of the helmet. The face masks (re)turn from white to gray, following what seems to be a recent trend. The Bills website also says that the white helmet will have a special metallic flaking painted into the helmet to make the white "pop" in the direct sunlight or for a night game. Opinion? While I personally am not a fan of white helmets in general, this is OK as it will allow the logo to stand out, but it will also eliminate the convoluted stripe combo of the 2002-2010 helmet. 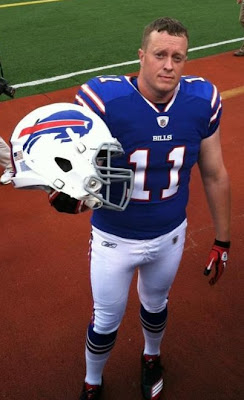 The jerseys: The oddball jerseys of 2002-2010, which did everything but identify the team wearing them, have been ditched. In their place is a uniform that does hearken back to the early 1990's glory days. We'll start with the dark jerseys. A welcome change is a return to the royal blue after the odd - but then trendy - move to navy in 2002. The collar is a tri-color of navy/red/white. The numbers are standard block white with a double outline of red and then a razor thin navy. The TV numbers are on the shoulders and do not have the navy outline. The "sleeve" stripes are two white stripes with the same outline pattern as on the body numerals. The NOB's are the standard sans serif non-outlined white. Additionally, there are two team ID elements on the jersey; the "BILLS" wordmark below the neck and, following the Cardinals and Vikings lead, the right side Bills logo on the nape of the neck on the back, above the NOB. Opinion? This is a massive improvement on the previous set and is unmistakably Buffalo.

The white jersey ditches the blue shoulder yoke of 02-10 lore and also hints of the glory years of the early 90's with a few twists found on the new blues. The white also has a tricolor collar with a red/navy/blue combo. The numbers (front, back and shoulders) are blue with a double outline of red and razor thin navy. The double sleeve stripes are blue with feather outlines of navy, then red. The NOB is a striaght sans serfied blue. The whiye jersey also features Bills ID's, with a blue "BILLS" wordmark on the front and the charging buffalo on the back of the neck above the NOB. Opinion? Like the blue jersey, a nice look returns to the Bills.

The pants: If all is true with the unveiling, the Bills will only have a white pair of pants starting in 2011. While not getting a really good look at the trousers, it does appear that they will be white with side stripes of blue/red/blue. There is one major addition to the pants, the logo will appear on both hips, with a charging right buffalo on the right hip and a charging left buffalo on the left hip (requiring an L and an R detail from Bill!). Rather mundane, but a good fit with either jersey. Opinion? I happen to like dark pants as a nice compliment with either a white or dark jersey, but with a sorta retro look, I have no real problem with just the white set.

The socks: Again, not getting a great look, but one nice item on the blue socks is that there will actually be stripes on the socks! The stripe pattern will be the same as on the sleeve stripes on the blue jerseys. There will also be white socks worn with the white jerseys. The stripes appear to have the pattern as the blue socks, with additional blue outlines. Opinion? Nothing to say for the white socks, but it is a nice touch to see stripes on the dark socks, becoming only the third team (Chicago, Kansas City) in the NFL with striped dark socks.

To sum up, I do like the retro feel of the unis, with modern elements complimenting and not taking from the new look.

For further analysis of the Bills' new threads, check out Phil Hecken's column today at Uni Watch.  Tomorrow I'll be back with a discussion of white-on-white in the NFL and why the Bills felt the need to omit the blue pants from the new ensemble.