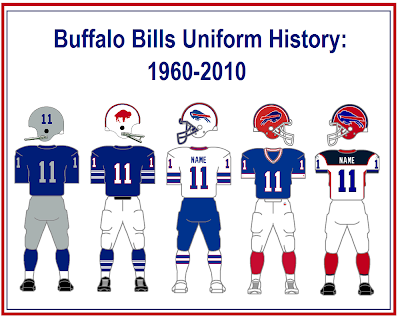 In 1974 the Bills changed their helmet logo, from the "red standing" buffalo to the familiar logo of the "blue charging" buffalo, and they would keep this uniform through the 1983 season.  This style would pretty much be synonymous with the Joe Ferguson years.  The wore the red socks from the 1973 season for just the first year of this style, and then from 1975 through 1980 the uniform was predominately blue.  In 1981 they brought back the red socks and kept them for the last three years of this style.
Throughout this era, they kept the bright royal blue pants, which they introduced in 1973, with the white jersey and wore the white pants only with the blue jersey.
The Bills made the postseason in their first season in this helmet, going 9-5 under Lou Saban and losing to Pittsburgh in an AFC Divisional Playoff game.  They then had a few lean years, and when Chuck Knox became the head coach in 1978 things started improving.  In 1980 they went 11-5 and won the AFC East, but lost to San Diego in the playoffs.  In 1981 they were a Wild Card team at 10-6, and defeated the New York Jets in the wild card game, before losing to Cincinnati.  They would last wear this outfit (with the white helmet, anyway) during a 8-8 campaign in 1983 under new coach Kay Stephenson. 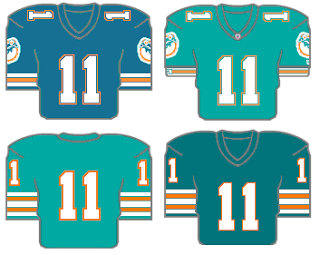 Today we want to thank for a website mention Jesse Alger and the guys at a Miami Dolphins website, the Finsiders.  They used our graphics in constructing a slideshow of the Dolphins uniforms through the years called "Aqua Through The Years," showcasing how the Dolphins seem to change the shade of their jersey color more often than some teams seem to change their socks.

We do also want to give credit for a slight change in our database to John Smith.  He was mentioning to us that the 1991 and 92 Patriots -- the last years they wore the red jerseys -- were outfitted by Russell Athletic.  He provided us with information that game-worn jerseys in his collection proved this data as well as photos from the era. 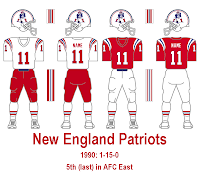 This may be the case with the Russell Athletic logo on the 1991 & 1992 Patriots.  While the manufacturer information is appreciated, if it is not describing an appearing detail of the jersey, it is outside the scope of this database.  If we were to attempt to go back and include manufacturer information on all past jerseys in cases where the logo wasn't visible just for the purpose of including this information, we'd have a lot of work on our hands.
John did provide us with one item to update, however, and that was that the 1990 Patriots did wear white facemasks, and we have made that change to the database.

We also have some changes involving the Philadelphia Eagles and the Kansas City Chiefs, which we promise we'll try to get to tomorrow. Also Thursday, we'll have Part IV of our look back at the Bills' uniforms through the years.