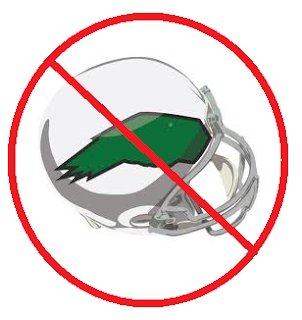 Today, our historian Tim Brulia weighs in on the recent debate we've been having regarding the Philadelphia Eagles' early 70s white helmet with the green wings and whether or not it ever had a black outline, either the whole 1969-73 era, or just all or part of the 1973 season:

~ ~ ~
In the early days of my rather intensive research of pro football uniforms, I have come across a few claims of certain helmet logos, TV numeral placements, oddball color schemes, and the like. Claims that were found on websites like the "Helmet Project" and "Mike Stanhope's Helmet History Page" among others.

One of the earliest such claims I have come across was that the Philadelphia Eagles wore a helmet that consisted of green wings with a black outline on a white shell. This much is true: In 1969, the Eagles made the first change to their helmet since 1954, when they first added a pair of silver wings to their green helmet, becoming only the second NFL team to sport a logo on their helmet. The Eagles actually wore two helmet designs in 1969, the NFL's 50th season of play. They kept the green helmet, but changed the wing colors from silver to white. They wore the green lid for away games only. They also broke out a white helmet with green wings for their home games at Franklin Field. In 1970, the Birds dumped the green helmet entirely, and would wear the white helmet exclusively through the 1973 season.

Where this claim of black outlines around the green wings gathered steam is somewhat unclear to me. In fact, some of the claimaints used various photos as proof positive that the wings were indeed outlined in black. Perhaps the most notorious claim of the black outline was a super-zoomed in shot of quarterback Norm Snead. Having been a geek about football uniforms even back in 1973, and having seen a number of Eagles games on TV, I know I would have been able to spot a black outline on the wings. After all, starting in 1970, the Eagles started to wear jerseys that were very plain in design, no sleeve stripes and numbers that had black outline on the numbers on both the white and green jerseys. In 1971, black stripes were added to the pants, flanking the middle green stripe. I guess folks thought that well, with black on the jerseys and pants, black has to be on the helmet, too?

My theory on why people think that they saw black on the wings when they really never ever had them? It may be as far-fetched as the black outline claims, but a decal's edge may appear to have a darker edge around them as opposed to their "natural" color. I'm not sure what affect lighting may have on the decal edge, but I'm thinking that games that were played in sunlight would seem to create the dark edge effect moreso than a game played in less than ideal light. In fact, take a good hard look at a photo of a very close shot of the helmet logo, any helmet logo. You MAY be able to see a millimeter thin blackish outline just offset surrounding the logo. 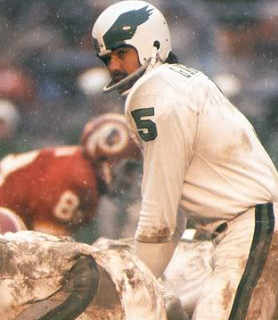 Our graphic artist Bill Schaefer came across an NFL Films clip of Philly's 1973 game at Washington, which I believe, is the last game that the Eagles wore the white helmet. Bill came across some nice screenshots from this game, played under snowy conditions, which clearly show there was NO black outline on the green wings. No tricks with sunlight or floodlights.  The picture at right of Roman Gabriel under center is from that game.

At any rate, the Snead picture we mentioned earlier was from the 1970 season, while the Chris Creamer's sportslogos.net site that spurred us revisiting this topic this week, shows no outline for 1969 through 1972 and the black outline for the 1973 season.  Other fourms have been discussing this matter for at least six years, and no conclusive proof of the existence of a black-outlined green-wing white-helmet has ever surfaced.

The bottom line: based on the evidence we have seen, we have come to the conclusion that at no point during the white-helmet era of the Eagles, did the green wings have a black outline.
Oh, I'm sure that some will still try to sway us with proof positive that the Eagles wings did have the black outline in this era. But as far as the Gridiron Uniform Database is concerned, dude, it didn't happen.

Well, there you have it.  Like Tim says, as far as we at the Gridiron Uniform Database are concerned, the issue is closed, the Eagles' white helmet that they wore from 1969 through 1973 never had a black outline around the green eagle wing.  Now if you do still believe otherwise, then I encourage you to look for incontrovertible photographic proof.  Is it technically possible that they did introduce a black-outlined wing on the helmet for a game or two during the 1973 season?  Absolutely.  Perhaps they used it at the beginning of the season, and scrapped it shortly thereafter.  But for the time being, as Tim pointed out, we have found no evidence that they ever did have such a helmet, and also believe for a fact that the helmet that they were using at the end of the 1973 season absolutely did not have a black outline on the wing.

If you are still certain that such a helmet did exist, then I encourage you to continue looking for evidence of it's existence (beyond the photographs we have already discussed) and we will consider re-visiting the matter, but in the mean time, the case is closed.

~ ~ ~
To those of you who haven't voted in this week's matchups in the Best NFL Helmet of All-Time, hurry up and get your votes in, another round of matchups will be unveiled on Monday and also we have a whole bunch of database updates to hopefully reveal tomorrow.