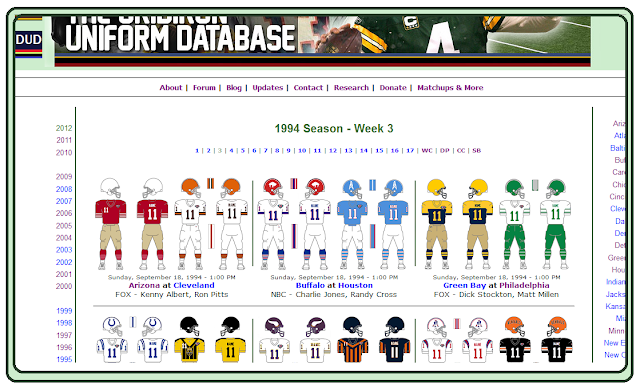 Last week we announced plans here at The Gridiron Uniform Database to gradually roll out the 1920-1932 seasons here in the database.  Some would call this the most exciting research we will have -- it is the very earliest years of the NFL and it features many teams that no longer exist and a game that is the most removed and different from the one we know and love today.

It is also the hardest era to conduct the kind of research that Tim & Bill are doing in trying to nail down accurate graphics from these years.  Many of the games have no surviving photographs, many of the teams played a haphazard schedule, and some played very few games.  The 1921 Tonawanda Kardex, for example, only played one league game.


The league was known as the APFA - The American Pro Football Association - in it's first two years before changing it's name to the National Football League in 1922.  In that first season, games against non-league opponents actually counted in the standings, but tie games did not.  Twelve teams competed in the league, and the Akron Pros went an undefeated 8-0-3 to capture the first championship.

The second season saw the number of teams swell to 21 and the Chicago Staleys (who competed as the Decatur Staleys in the first season and would go on to become the Chicago Bears) won the 1921 title with a 9-1-1 mark.

We have added these first two seasons to the database and next Tuesday we will continue our march through the roaring twenties with the first "NFL" season, 1922.

This brings us to a couple other changes to the site.  As you know if you've been with us for the year that we've been around, it is our goal to make the site as easy and intuitive to navigate as possible.  In the past I have received emails and comments complaining that the site navigation can be somewhat confusing.  We have tweaked it here and there but have been unable to come up with an ideal format -- until now.  You will notice that the "week-by-week" links are now gone -- you will now be able to merely click on any team thumbnail and that team page will have the full-size graphic and the week-by-week schedule below it.  Our goal is to have the site complete -- with the exception of the 1920-1949 week-by-week game combos -- by September.  You will now see that on the year pages from 1950-2009 there is a link to the "Season Chart" at the top so you can view the head-to-head matchups worn each particular week in the mean time. 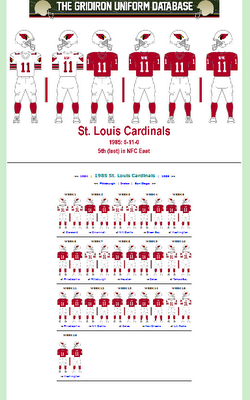 We will be rolling these team pages out in no particular order, however, we intend on having 1994, 2010 and 2011 completed this week, as well as the additional 1920s pages completed as these seasons are released.

Last week we did an update to the 1985 St. Louis Cardinals, adding a third uniform combination when it was pointed out to us in our forum that the Cardinals did not wear the white sanitary socks for their Week 14 home game against the New Orleans Saints.

You will also find easy navigation arrows that will allow you to browse to the previous and next seasons of that team as well as alphabetically through all of the 1985 NFL Teams.

You will find this new style already present on the 1920 and 1921 teams as they are released and throughout the summer it will propagate throughout the rest of the site. 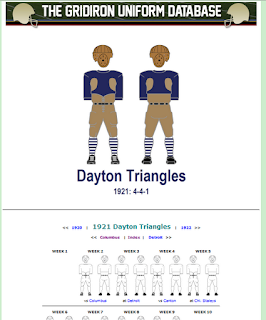 You can see by the example of the Dayton Triangles here to the left, that even though we are not releasing the week by week uniform combos for the pre-1950 period, this style of team page will make its way to all teams throughout the database.

Another feature we are working on is continuing to expand the collection of weekly pages on the site.   Due to popular demand the 75th Anniversary Throwbacks of Week 3 of the 1994 season (along with all of the individual matchups of that week) have been added to the site.  We hope you'll enjoy those, and we'll continue to add various weeks from throughout NFL history until they all are done.  As you can see, the 1920 season has already been added (albeit without individual team graphics) and we be doing the rest of the 1920s as we releases those new graphics as well.

Our goal would be to have everything on the site immediately, but that of course is impossible.  We are, however, going as fast as we can to add stuff ASAP. By clicking the "Matchups & More" link at the top of the main pages, you can follow along on which of the team yearly pages and weekly pages have been added already, and as always if you have any particular items you'd like to see on the site sooner rather than later, let us know, and we'll move it to the front of the list. 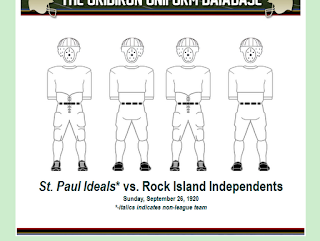 We do not have a time-frame for releasing the 1920-49 week-by-week data, but the 1950 through the present data is available and on the site and will soon be displayed on all of the team pages completely as we go along.

Along with completing these pages we also intend on rolling out all of the game head-to-head matchup pages.  These are time consuming to do, and while we would like to have all of these in, we don't have an exact time frame on when they will be complete, however, rest assured they are on our radar as well.

There is one other small change we're not sure if you noticed or not, the Super Bowls are now represented by slightly larger thumbnail graphics than other games.  You'll notice this with the Super Bowl XLVI thumbnails on the current main front page, and you can see how it will be implemented in practice on the team pages by looking at the 1994 Chargers and 49ers team pages.  With the new format of five games per row on the team yearly pages, you can see how it just made sense to make a larger graphic for the Super Bowl teams as twenty weeks, or four rows of games, in the current 17 week + playoff format would go through the Conference Championships. 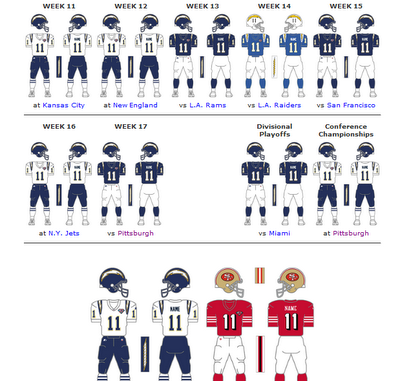 Thank you again for your continued interest, and we hope you find the site navigation easier to use and enjoy the site that much more.  If you have any questions, comments or suggestions, we'd love to hear them in our forum, and if you spot any broken links (other than stuff that just hasn't been put in yet) .... be sure to let us know.