Last summer, in the initial months of the Gridiron Uniform Database Blog, I used to write articles every day about database updates and related items.  In September, when school started back up we decided that the time that I had to devote to the website was better spent working on the database rather writing daily blogs, Uni Watch style.  Every now and then, however, an item comes up to blog about like this one today, so for today at least, blog style, we are going to party like it is 2011 and bring you a full write-up. 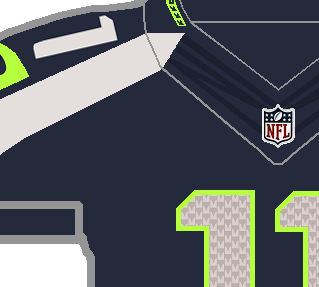 Here at the GUD, we are anxiously awaiting the new season and the 2012 Seahawks Nike re-design, (part of which is pictured at left -- I don't have permission from Bill to show the complete image yet, but I hope he doesn't mind me giving you a little taste!) My attention on Saturday, however, turned to earlier Seahawks uniforms.

For the most part, until the 2002 redesign the Seahawks wore a fairly unchanged uniform.  The uniform that Jim Zorn wore in the late 1970s was pretty much the same one Shaun Alexander donned in 2001.  I had always thought that the Seahawks of earlier years had larger numbers than later years in the pre-2002 era, and that didn't seem to be reflected in the database.  I had thought about this awhile ago, but decided to not pursue it due to varying number sizes being something that is somewhat hard to quantify -- the pre NOB NFL 1960s, the 1940s Redskins, among other uniforms had differing size numbers and I figured it was something that Tim and Bill had already discussed and I didn't feel it really warranted a change, as it wasn't really that much of an issue. 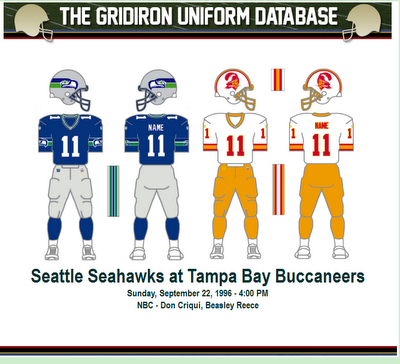 Those of you who are regular readers of the GUD blog know that I am a huge Tampa Bay Buccaneer fan, and I have a collection of many of their games.  For whatever reason I found myself watching the Bucs' 1996 game against the Seahawks, it was early in Tony Dungy's first season as coach, a particularly memorable game that saw the (0-3) Bucs take a 13-3 lead deep into the fourth quarter only to snatch defeat from the jaws of victory, as Dungy's Bucs, in their last creamsicle season, were well on their way struggling to a 1-8 start.  They would rebound and close the season with wins in 5 of their last 7 games and this would be the beginning of the team that would go on to win the Super Bowl six years later, albeit a year too late for Tony Dungy.

While watching the game, as I do while watching many old games, I pulled up the GUD images of 1996 Seahawks and Bucs.  Noticing that the #11 on the Seahawks graphic had serifs, I was a little puzzled when I saw a 7 on a Seahawk OL-man that didn't.

This doesn't necessarily mean that the 1s we had in the database were incorrect, but it was something that would require further investigation.  First of all, it was the shoulder numbers I noticed, not the main jersey number.  The shoulder numbers and main numbers are very nearly always the same font, but first I would have to confirm that the main uniform number was unserifed as well.

On the next play, I saw the lineman #74 again, this time lying on the ground and could see that his main uniform 7 was indeed unserifed.  Now was the 'one' the same?  Again, we could assume it was, but here at the GUD, we never assume anything.  When a team has a single-digit wearing signal caller like the Seahawks had with Rick Mirer in the mid-1990s, it is sometimes harder to spot a player wearing a one.  You have to hope you'll see a kicker, punter or back-up QB in the teens, or a WR with a 81 or a CB with a 41. 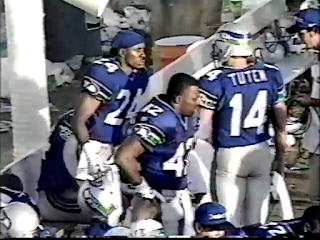 Midway through the fourth quarter, as the Bucs were preparing to collapse and fail to give Dungy his first victory as a NFL head coach, I saw Seahwks punter Rick Tuten on the sidelines.   Clear as day, his #14 featured an unserifed one.  This was now officially a GUD discovery that would eventually necessitate a database change.

The question now became, how far back did the un-serifed one go?  I was sure, in my mind's eye, that Jim Zorn's 10 did have serifed ones back in the day, but after thinking about it I now wasn't so sure.  Would the whole 1976-2001 era uniform set be affected by this change?  My first stop was to Google Jim Zorn...sure enough, his one was serifed, and as you can see in this black and white posed picture of him with Steve Largent, boy were those numbers huge! 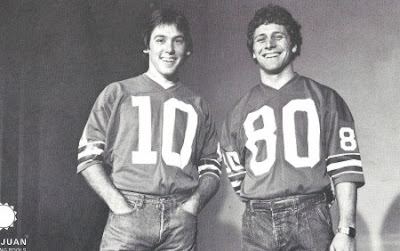 But here was another difference I hadn't anticipated, the one was "squared-off" at the top.  Here's another picture of him (to the right) in game action with a squared-off one.  This apparently didn't last for all of Zorn's career, as most pictures of Zorn show him with the "slant-cornered top" one.

Punter Herman Weaver, who only kicked for the Seahawks from 1977 through 1980 is shown in this picture below, which was dated 1977, with what I believe to be a slanted-cornered top one, so unless the date is wrong, or the Seahawks used different ones at the same time, I suspect the Seahawks only used the squared ones in 1976.  Terry Beeson, a MLB who started 16 games a season from 1978-80, was a rookie in 1977, so it is more likely that he would be being used on special teams that first year, although that certainly isn't conclusive as starters can play on special teams as well, and he did start 13 games in 1977.  But the photo was alleged to be from 1977, so without doubting the veracity of that, we'll conclude they wore the squared one only in 1976.
And this previous picture of Zorn against San Diego is undated, but presumably it was from sometime around 1979-81, and like most of pictures of him, it seems to have a diagonal-cut one, like the one that Weaver seems to sport in 1977.  More research is needed on the top corner of the ones in the 1977-83 years, but for now I can seem to conclude the square-one was only 1976.

Now on to the main attraction of the serif vs sans-serifed foot of the one.

Later pictures of the Seahawks, like these of Warren Moon and Brock Huard, seem to indicate that in the later years the sans-serif stayed throughout the run of this uniform set through 2001.  In the database we have all the ones from 1976-2001 as being traditional serifed, and it was a 1996 image that led me to delve into this research.
So I went back to my Bucs' games collection and checked-out the 1984 Hall Of Fame Game against the Seahawks.  In this game the Seahawks 1s were....

...serifed, but the research would continue on.  Size wise, it appeared that I would find that all of the numbers pre-1993 were indeed somewhat larger than the currently indicated size, but it seems the 1976 numbers were the largest, while numbers from 1977 through the serif era were not as much larger than what we have in the database than the 1976 digits were.  The size for the sans-serifed images would seem to agree with the size of numbers that we presently have in the database.

A picture from a 1987 MNF game against the Raiders -- you may remember Bo Jackson running over Brian Bosworth and also disappearing into the Kingdome tunnel that night -- reveal that in '87 they still had the old style one, but in a later MNF game, 1992 against the Broncos, they were still wearing the same serifed style, but they now had a rounded top to the one.

But then back to my Buccaneer collection and a 1994 game against the Seahawks, which showed Seattle with the new style ones, and the only question left was to determine which style did they wear during the 1993 season. 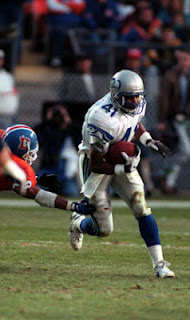 I didn't have any '93 Seahawks games in my collection and a Google search was less than helpful.  I thought I had struck paydirt on this page chronicling the Seahawks' 1993 Season, as #41 Eugene Robinson is shown returning a pick at Denver.  Robinson, who played for Seattle from 1985 through 1995, however, did not have an interception in the 1993 game at Denver, and further research shows that this picture was most likely from the 1995 game at Mile High.

I then came upon wide receiver Michael Bates.  Bates, who wore #81, only played two seasons with the Seahawks, 1993 and 1994.  A quick Google search of Bates will show him wearing both the old style and new style ones.  The simple fact, however, that he didn't join the team until 1993, however, indicates that the sans-serif one can be pinned down now as being worn exclusively from 1994-2001.

Now back to the top of the number one.  With the 1987 Dave Kreig pic showing the slant top, and the 1992 Dan McGwire pic showing a curved-top, the only thing left is to figure at what point between 1987-1992 did they switch to the curved topped one.  We will save that for another day, but for now, to sum up best as I can discern, the Seahawks jerseys need the following changes and these will be forwarded on to Tim and Bill for inclusion in the database.

If anyone wants to delve further into the slant-top vs rounded-top 1, be my guest, in the mean time, we'll leave it there for now.

(Added:  After further research it appears that the Seahawks may have used the curved top numbers in 1983-84, so they may have gone twice from the slant numbers to the curved numbers, back to the slant numbers, and then finally with the curved numbers again in 1992-93.  And the Weaver picture may indeed shows the curved numbers in 1977.  The only thing definite is that 1976 was square numbers, and 1994-2001 was the sans serif numbers.  1977-1991 definitely needs more research regarding the Seahawks number font.  I have so far seen no evidence, however, that they used two different number types in the same season, but that doesn't mean that they necessarily didn't either.)

(Added #2: Our Bill Schaefer popped in with a couple 1976 pictures to show they indeed did have the slanted-top numbers, and offered that the square-topped numbers were likely just a publicity image and not actually used in a game.)

Also added to the database, are the 2011 AFC North team pages as well as the undefeated 1972 Miami Dolphins team page. Coming Tuesday we will be releasing the highly anticipated 1922 season, and soon we will be hearing from Larry Schmitt again with another in his "Matching Rivals" series, this time a breakdown of the Dallas Cowboys and Detroit Lions.  Also upcoming an exciting breakthrough featuring a forgotten 1946 AAFC team.