Anyone Up For An Early Season Rant?

There isn’t much to do for the current season for a graphic designer at this point in the season. Every once in a while, the uniform gods will throw me a change-up like Kansas City going mono-red or Carolina going mono-black last year. But to be honest, and in no way am I trying to brag, I have to tell you that I actually had those two combos ready to roll before we even knew that they were going to be worn.

Prior to last season, someone had posted a screenshot from last year’s Madden Game just after it’s release. The image showed a Panthers player in a blue jersey over black pants. At the time, I figured I’d better be ready just in case. What do you know? It was actually needed. Go figure. 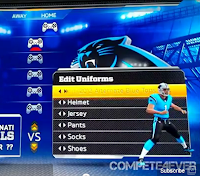 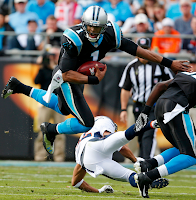 The Kansas City story is a little more serendipitous.  Two years ago, Tim Brulia made a request of my graphic abilities purely on a lark.  He asked me if I could throw together a couple of mono-toned uniforms for two teams. He had wanted to see Cleveland in mono-brown and Kansas City in mono-red. Just for kicks I also added a mono-blue for Indianapolis re-inventing  the long lost blue pants from 1995.  I’d had these on the back burner never knowing if they’d be needed. My Dad always said, “never throw anything away because you’ll never know when you’ll need it.” (Trouble is Mom always cleaned while Dad wasn’t around.)

I still have a couple of others on that same back burner. Last year’s Madden Game also showed Chicago in orange pants – something that has yet to come to fruition. Also, prior to their newest uniforms being released, a photo was uncovered showing the designers making sketches of the new Seattle combinations. Looking closely, one of those sketches included neon green pants.  Believe me, those are just waiting to be shown the light of day!

Anyway, time to get to the gist of this blog.  I was looking at some teams over the weekend and I got to thinking about how certain little things could be addressed in the NFL uniform-universe and we’d all be a little better for it. Well, at least I would be.

I love a good, old-fashioned rant every now and then. In the words of Dave Dameshek,
“Let it  begin!”

In the AFC East… 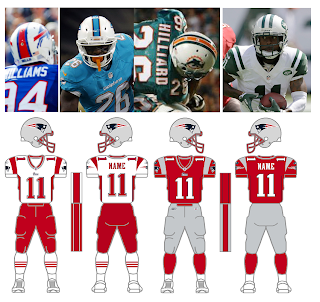 I love what Buffalo has done remaking their image and sort of returning to their roots.  The only item bugging me is that back side of the helmet stripe. It’s different but it doesn’t really add anything.
Miami did well with their remake this year. I find no problem with the style. I just think that that the color they chose is too ‘Carolina-blue’ and not enough aqua.
Whenever the Brady/Belichek Era ends in New England, I’d like to see them return to red as their main color. Imagine the current uniforms but interchange the navy with a crimson red. This hastily made tweak conveys the basics of my thoughts.
Every time I see the Jets’ jerseys, I think of New Orleans. Remember back in the Reebok days when the Saints’ black jerseys and gold pants had like 5 different shades of gold for the helmet, pants, numbers, collars, and sleeve logos? Well, the Jets aren’t that bad but you would think it’d be possible to match the green of the shoulder stripes to the green everywhere else. Also, make those shoulder stripes loop all the way around to the armpit!

In the AFC North… 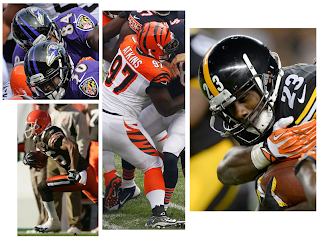 Baltimore needs to add a stripe(s) to the black pants. Just having the stylized “B” on the hip doesn’t cut it. I wish they could also match their helmet stripes/pointy things to the same purple they use everywhere else. They always looks more blue than purple.
For Cincinnati, they’ve already begun to fix my only complaint. Black socks are boring. They need to wear the orange ones more often.
Cleveland needs to bring back the orange pants. Plain and simple. And stop wearing mono-white at home!
(Sarcasm alert.) Has anyone ever mentioned that the Steelers need to return to block numbers? I do love that they’ve kept their helmet stripe the same orangey-yellow that their pants used to be. They did not change it to bright yellow like the rest of their trim.

In the AFC South… 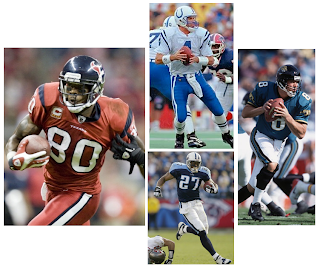 I would love to see Houston back in the full “Battle Red” at least once a year.
Indianapolis, as mentioned above, should bring back the blue pants option for occasional usage. Fix the darn shoulder stripes, too.
Jacksonville can just start over, nostalgically. Put the new logo on a 1996 uniform and call it a day.
As with Cincinnati, Tennessee has a head start in the right direction. Word is that they are going to wear the old navy jerseys on a few occasions this season. Good.


In the AFC West… 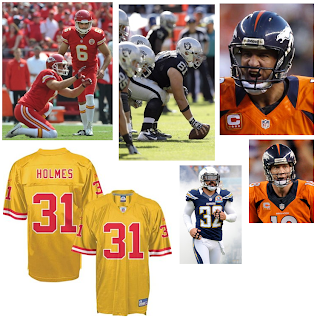 Denver fixed the toilet seat collar for this season. Now get rid of it all together for next year. No colored collar is needed at all.
Kansas City already made Tim’s dreams come true by going mono-red. Good for them. I happen to agree that it's an good look for infrequent usage. Just continue to resist the temptation to make that yellow third jersey a reality, OK?
To be honest, I wouldn’t do a thing with Oakland’s uniform. Except maybe put better players in them.
I have to say I’m a traditionalist. I tried to give it time to let them grow on me but it just hasn’t happened. Into their seventh season and I still do not care for the ¾ angled sleeve bolts. Return them to their proper over-the-shoulder location. They’d be absolutely perfect then.

In the NFC East… 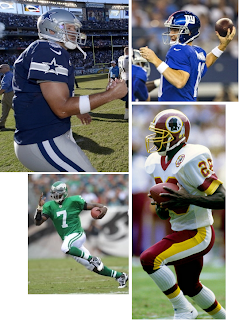 My rants are legendary on the Dallas uniforms. Pick one shade of blue and one shade of silver. That’s it. Change the white jersey to a white version of the navy jersey and then come talk to me. I still think the navy combo is much more classy.
The Giants need to match their blue jerseys to the blue of the helmet. The jerseys always look faded in comparison.  Permanent replacement of the grey pants with the new white pants would be nice. And, like most everybody else, tradition is nice but I still agree with those that think more blue than red on the away combos makes too much sense for a team called "BIG BLUE."
Kelly green, Philly, kelly green. Keep the same design if you want, but go to kelly green.
I miss seeing Washington in white jerseys over burgundy pants with striped white socks like they used to wear in EVERY game at RFK. The yellow pants just don't look right below white jerseys. They can keep the yellow pants to wear under the burgundy jerseys but bring back the burgundy pants, please. (This is not the time nor place to begin to go into Washington’s ‘other’ problems.)

In the NFC North… 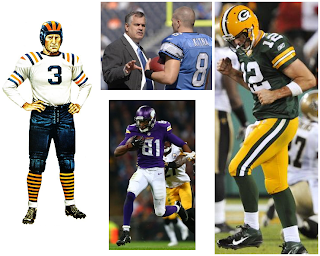 I don’t have a current complaint but I’d love to see a new Chicago throwback based on the 1936 white jersey combinations. They could still use the navy-shelled helmets, too! Go ahead. Explain to me how they wouldn't make a bundle on THOSE jerseys!
Detroit, lose the black. It’s still linking you to the Millen Era.
Green Bay is another case where I’ve started to notice that their helmet is a different shade of yellow (bordering on orange) than the rest of their uniform. Match it up.
Minnesota fixed just about everything that was wrong with what they had. I wish they’d make both numbers on their jerseys with the same font. Either go with the ‘sail-tails’ or go without. Half-and-half is not working especially when the second digit doesn't have rounded corners. I'm still not convinced the helmet purple matches all of the other purple.

In the NFC South… 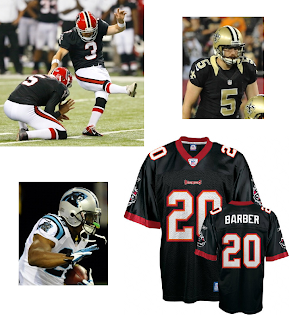 Atlanta needs to admit that the 11-year experiment is over. Base new uniforms on the alternate/third jersey combo that had to be scrapped this year. They were clearly the superior combination.
I would like to see Carolina pair the black pants with the other jerseys besides just the black jersey.  Also, fix the shoulder stripes and loop them all the way around to the armpit as the Colts and Jets need to, also.
New Orleans has corrected their gold-clashing for the most part. They could still stand to do away with the toilet-seat collar.
Tampa Bay really doesn’t need an improvement in any area. I just wonder why they’ve never gotten around to a black jersey. It is one of their colors. I’m not saying it’s a good idea but I am just surprised that the team has never done it.


In the NFC West… 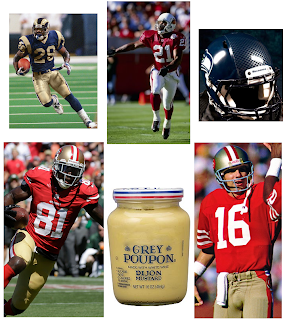 We all know that Arizona’s uniforms feature too much piping and separate areas. I’d like them to go back to something more basic. Not plain, but more basic. Is that possible?
St. Louis can either revive the gold pants or perform a total redo back to any Los Angeles style.
San Francisco, what’s the deal with the pants? I used to think those dingy khaki pants they wore back in the Joe Montana days were bad. These look somewhere between French’s and Grey Poupon. And, is it just me or do the Niner’s helmets look more bronze than gold the last few years?
I admit I was kind of partial to the grey-blue Seattle sported up until last year. I’m not a big fan of the triangular, glossy helmet stripe made up of the little funky wing-dings. Change that and I’d go along with it.

Honestly, how difficult is it to match colors? I could produce better results on a trip to Home Depot than what some of these teams are trotting out. The devil is in the detail and perfection is within reach.  It just kills me that not only did someone think each of these facets up and think each was a good idea, but then someone else in a position of power/authority/decision-making had to agree that they were good ideas and gave them a stamp of approval.  The mind boggles.

<sigh> I feel much better now. Thanks for listening.
Bill Schaefer