*** - UPDATE - ***
Several inquiries have been made over the last few days due to the recent addition of the USFL uniform collection. The most requested of which has been, "Does this mean that we will be seeing the WFL, CFL, NFL Europe, Arena Leagues, and the early incarnations of the AFL?" To answer these in order, "Maybe, not without several minor miracles, no, definitely no, and not for a long time."

Of the other leagues, the WFL is the most likely to get added eventually.
Without a flawless resource to Canadian newspaper archives, it is likely that this will not happen.
Our feeling is that NFL Europe was run as a developmental (minor) league and so therefore should not be included with those leagues currently displayed.
The Arena Leagues are a completely different sport.
The early AFLs from the first half of the 1900s rivaled what became the NFL. The only problem is finding enough images of the teams to be able to construct versions for the site. Very difficult.

The GUD has a few upcoming projects on tap. However, each is only in the planning stages currently. Our advice to our viewership - be patient and let the surprises happen when they do.
Bill Schaefer
***

As I mentioned in my previous blog entry, it's currently a difficult time to be graphic engineer at a football uniform website especially now when the NFL has decreed that teams will no longer be allowed to wear throwback uniforms UNLESS they adhere to using their current helmet gear. Goodbye, Pat Patriot, Bucco Bruce, and the likes of Falcons and Cowboys throwback designs that incorporated different helmet shells than the typical sets.

On a lark, I took it upon myself to see what I could do developing images from those wonderful three years of American history – 1983, 1984, & 1985. Those were the years in which millions and millions of Americans parked themselves in front of their televisions for that weekly showcase of professional athletic talent known as the United States Football League.

Yeah, me neither. I couldn't keep a straight a face myself.

But let's face it. A number of NFL 'greats' and even Hall of Famer's Like Reggie White, Jim Kelly, and Steve Young all got their professional starts in the USFL.

Until now, however, the uniform history of the USFL was limited to a few small sites utilizing 'Wikipedia-style' uniforms. That was going to change.

I began by doing some research. This venture would be for not if I couldn't find some decent quality/sized logos with which to work. The problems I ran into were enormous.

The file qualities were substandard and grainy. Very early in the GUD's history I learned the hard way that logos in jpeg format do not retain the quality needed for crisp designs. Even if I were to fix the blemishes, when I would save the changes, blemishes would reappear throughout the image when kept in jpeg format. To maintain quality, images must be kept in png or bmp file types. The images I found required a great deal of enhancement and sharpening. 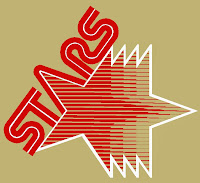 Two other problems with the images were that they were incomplete and often inclusive of the wrong shades of colors. For instance,  let's refer to the Philadelphia Stars logo. Most of the versions of this logo that I came across were those from early in 1983. By the start of the 1984 season, viewers, both live and in person along with those watching on TV, decidedly could not make out the design of the helmet logo.  A few weeks into the the 1984 season, the team conceded and added a white outline around the majority of the logo to increase visibility. The Pittsburgh Maulers did the same thing that year by adding white outlines into their helmet logo midseason. Not only would it be required that I add these outlines where needed but I then was forced to re-color the entire background of most logos to match the true color of the helmet or jersey upon which they were to be placed.

This was just the beginning. For a seemingly modern era football league, there just aren't that many online resources available dating clear photos or footage. This makes claims like the next one very difficult for people to document accurately.

The Helmet Project, http://www.nationalchamps.net/Helmet_Project/ , lists two footnotes beneath their illustrations of the Michigan Panthers helmets. One man claims that silver helmets were worn early in the Panthers' first season while another maintains that they were ALWAYS champagne-colored. Due to the inability to confirm either at this point, the first draft of Michigan's 1983 yearly team image includes both varieties.

Shuffling of the franchises was another characteristic that made franchise continuity difficult to follow. Stay with me if you can...

The Philadelphia Stars played for two years before moving to Baltimore. The 1983 Arizona Wranglers and Chicago Blitz essentially traded teams with each team becoming the other for 1984, but in 1985, Arizona merged with the Oklahoma Outlaws and became the Arizona Outlaws. The Boston Breakers (1983) moved to New Orleans (1984) and Portland (1985) in consecutive years, luckily never moving somewhere landlocked like Las Vegas. After two years of calling Michigan home, the Panthers merged with Oakland, continuing to be called the Invaders. The 1983-84 Washington Federals moved south in 1985 to become the Orlando Renegades. Whew! 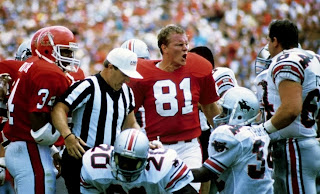 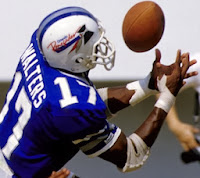 A situation also developed during the handling of a fairly stable team – the Tampa Bay Bandits. I uncovered a photo of several Bandits players, mostly linemen, and they were wearing jerseys made by Speedline (as opposed to the rest being manufactured by Champion) that did not include the Bandit sleeve logo. Since we, at GUD, had decided back in the beginning to model the jerseys worn by 'skill' players, this jersey option was not included. However, I did include a footnote on the yearly image that mentions those jerseys were, indeed, worn. Speedline was also the manufacturer of choice for the Orlando Renegades in 1985.

My final hurdle in producing these images was that I wasn't much of a follower in the first place. As an eleven year-old, my first reaction was "Hey Dad, look! Football's on."  My Dad, who's been a Steeler Season Ticket Holder since 1977, shook his head back then and said "That's not football." Much later he elaborated that back in the 1960s, he had felt the same way about the AFL. At this point, I have to admit that I know more about 1960s NFL uniforms from watching NFL Films despite being born in 1972 than I do about the three years of the USFL. I am sure, now that these images are posted thanks to the abilities of our webmaster, Rob Holecko, those in the know will be more than happy to enlighten me as to changes and additions that need to be included by accessing the GUD Forum as they did when we first went online years ago. Remember, viewers, we need photographic proof to make the changes.