Before we get into it, just a reminder that you can find the new United States Football League Uniform Database at: http://usfl.uniformdatabases.com/  We also have a link at the the top of gridiron-uniforms.com.  Just click on the red "USFL UD" icon.  We think you'll like it! 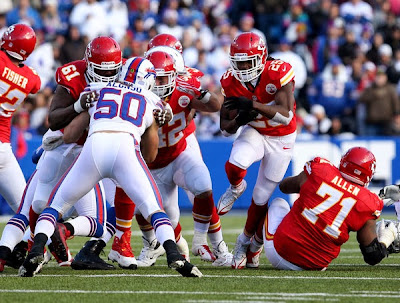 13) Chiefs-Bills:  KC in red/white, BUF in white/white.  So the Bills do a WAH, once a rarity, but now the third season running that they have done at least one game in the WAH.  And sadly, this in the all whites.  The Chiefs with the red jerseys at the Ralph, does add needed brightness for this uni clash.

12) Eagles-Raiders:  PHI in white/white, OAK in black/silver.  Eagles surprise with the all whites against the Raiders black & silver standard.  I think the green pants would have certainly been better here, it just makes the Raiders classic unis a bit better by comparison.

11) Saints-Jets:  NO in white/gold, NYJ in white/green.  Saints decide on gold pants instead of black, and likewise, the Jets decide to keep the trunks on the white side.  That doesn't really hurt this matchup, but I would have preferred one of these two squads in dark pants.  But, for a matchup we seldom see, it looks fine.

10) Vikings-Cowboys:  MIN in purple/white, DAL in white/mint.  Rather predictable, but with the Vikings in a more sweet shade of purple than of recent vintage, this becomes a better looking matchup.  Not really a bad pairing, as seen here.  Silvers, purples, blues with a touch of yellow.

9) Falcons-Panthers:  ATL in white/white, CAR in alternate carolina blue/silver.  Falcons in the rather unremarkable all white combo, but the Panther arrive in the awesome carolina blues, a look that desperately needs to be the primary look for them.  It really makes the Falcons dour whites look better.

8) Ravens-Browns:  BAL in white/black, CLE in brown/white.  This is the best possible uni matchup for this game.  All brown would have looked ugly against the Ravens, whether in this combo or in all white.  So, orange, brown, black and gold makes this one actually more halloweenish than the earlier CIN-MIA game.

7) Buccaneers-Seahawks:  TB in white/pewter, SEA in navy/navy.  While I do like the Seahawks in the all navys, I think a shock change to either the white or (preferably) the gray pants would have moved the uni meter firmly up.  Still, the pewter, black and red of the Bucs are a good contrast to the navy, green and light blue of the 'Hawks.

6) Colts-Texans:  IND in white/white, HOU in alternate red/white.  The Texans do it right with the "battle" reds against the Colts rather mundane whites with the solo blue trim.  Texans in navy would have set the snooze button on high,  But the reds set this one off very nicely.

5) Bengals-Dolphins:  CIN in white/white, MIA in aqua/white.  This is one night (Halloween) where the Bengals should have had free reign to wear their orange alternate jerseys with black pants.  But alas, the Bengals wore all white, with orange socks.  At least we got to see the Dolphins rock the brilliant aqua tops for the second time this season.  A good matchup, but boy, what this could have been...

4) Steelers-Patriots:  PIT in white/yellow, NE in navy/silver.  Memories of when these two would seemingly constantly bebattling with high stakes.  Not so much with the Steelers woes this season, but as far as uni pairings go, this is still playoff caliber.  Sharp blacks, yellows, navys, silvers a pinch of red makes this a nifty one.

3) Titans-Rams:  TEN in white/navy, STL in throwback blue/yellow.  The Rams decided to celebrate their 1999 championship team by going to the era-specific togs.  So it's a reversal of what the two squads wore in that memorable Super Bowl XXXIV game.  This was also the debut of the Bud Adams memorial patch, honoring the recently deceased founder/owner of the Titans. The unis looked fine, the blue and bright yellows of those Rams beauties tease us on what once was.  Good to see them again, and it makes the Titans look good as well. 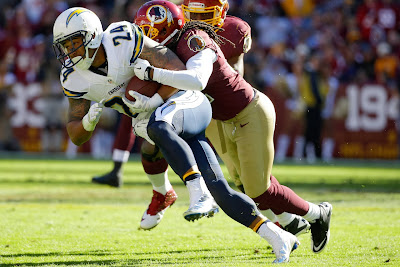 2) Chargers-Redskins:  SD in white/navy, WSH in throwback burgundy/khaki.  because the NFL decreed earlier that teams can only use one color helmet shell for the season, the Skins were forced to go with their burgundy lids go with the throwbacks.  So, the Redskins shed their stripes, leaving the logos go solo, sort of.  But these ace jerseys look oh so nice, with the bold gold, trimmed in white.  Couple with the Chargers in white and navy, this is one of the better pairings.  Only issue is when the Skins face left, you have the Native American facing one way on the helmet, and the other way on the jersey sleeve.  I'm just as confused as he is!

1) Bears-Packers:  CHI in white/navy, GB in green/yellow.  NOT ashamed to admit that this is probably my favorite uni matchup of all.  Just an abundance of tremendous colors and done so well.  The navy helmets and pants of the Bears, with the perfect dosage of orange, while the Packers rock yellow helmets and pants, with the perfect green jerseys and trim.  Doesn't matter if these two play for first in the standings or first in the draft, it is soooooo gooooood! 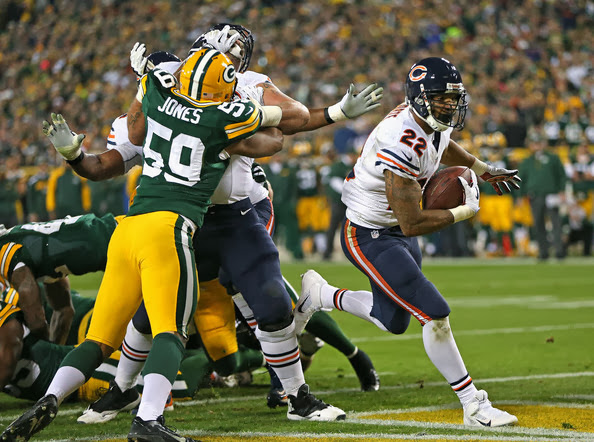 A great week of great uniforms for a great game.  See you next week!