JOY TO THE WORLD, THE WORLD FOOTBALL LEAGUE!!! 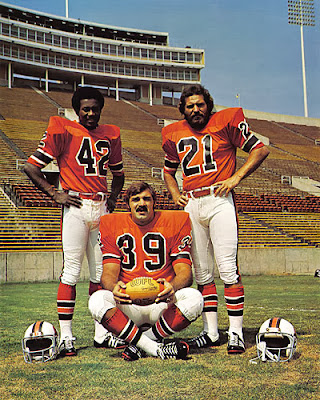 For openers, let me be the first here at the GUD to wish you and yours a very Merry Christmas and a safe and healthy New Year. And now, after throwing caution to the winds and having total disregard for who's been naughty and who's been nice amongst our viewership, the Gridiron Uniform Database serves up a retro piece of holiday fruitcake...The World Football League!

After completing the USFL images a few months ago, the GUD was flooded with comments both thanking us and asking for more. Foremost on the request list was whether or not we'd ever add additional leagues to our site. The original USFL introductory blog article was updated to provide our response.

It was agreed that the NFL Europe and the World League of American Football were never created to be on par or compete with the NFL but were instead founded more as developmental leagues for the NFL and, thereby, a step below professional leagues such as the NFL, AFL, AAFC, and USFL.  Arena leagues were also discounted due to being a completely different sport.  The early incarnations of the AFL from the first half of the 20th century remain a possibility for the future, however exhaustive research would need to be conducted to provide enough useful information to make such an endeavor worthwhile.

Therefore, the only other league remaining currently under consideration for inclusion on the GUD was the World Football League that operated in 1974 and 1975. Shortly after completing the work on the USFL and the ensuing update summarized above, I caught the bug.

My first concern was that, aside from the famous photo of the former Dolphins' backfield wearing WFL uniforms, I'd never seen any of their uniforms. I didn't even know which team's uniform Csonka and friends (above) were wearing!

My other concern was whether or not the teams' logos were already available in graphic form for use to create helmets. No logos were actually used on the jerseys, which made things much easier from my standpoint. Like the USFL, while the logos existed in the public domain, most were in extremely rough forms with every single logo needing improvement in some combination of color, quality, and sharpness in order to meet the level of expectations we have for the GUD. Above is one such example. 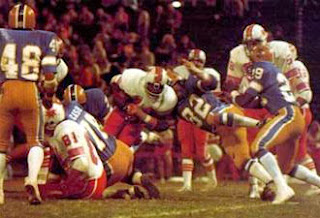 The next step in the process was to accumulate photos of each of the teams in game action.  In doing so, a pattern began to become obvious and, truth be told, it brought a gigantic smile to this graphic engineer's face. Ten of the twelve teams in 1974 and another six of the eleven teams in 1975 basically all wore the exact same jersey, pants, and helmet stripe combinations with the only differences being the color combinations. I am assuming that these teams got a 'swinging deal' from a single manufacturer to supply uniforms. I believe the mass-supplier was Russell Athletic; however, I am not entirely sure.

My next issue was identifying some franchise lineages and these were just as convoluted as the USFL's.
- Birmingham's Americans became the Vulcans for 1975.
- The Boston Bulls never played a game before moving to New York before the first WFL season had even started. That team, the New York Stars, played for 14 games before moving to Charlotte, North Carolina. The Charlotte Stars played one game before further revising their identity as the Charlotte Hornets for the remainder of 1974 and into 1975.
- The Chicago Winds played only 5 games in 1975 before folding. For their final game, they replaced the plain, capital 'W' on their helmet with the logo that was reportedly supposed to have been used from the start of the season but is believed to be the victim of a late arrival after the first four games of the season were played - literally a 'one-game' logo.
- The two franchises in Chicago (1974's Fire and 1975's Winds) are unrelated.
- The Houston Texans moved in midseason during 1974 to Shreveport and became the Steamer.
- 1974's World Bowl runner-up, the Florida Blazers, moved to San Antonio for 1975 and became the Wings.
- 1974's Jacksonville Sharks were renamed the Express for 1975.
- The Portland Storm was renamed the Thunder for 1975.
- Only 4 franchises – the Memphis Southmen, the Hawaiians, the Philadelphia Bell, and the Southern California Sun – played all of their games in two seasons under the same name.

Despite completing the project to the best of my abilities, there are some lingering issues. 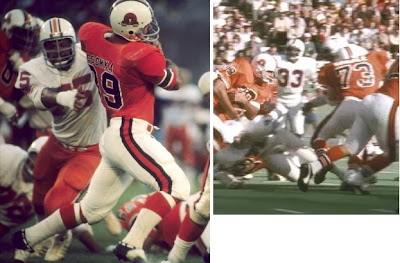 Memphis altered its logo by adding orange for 1975. I have seen photos showing different fonts on the orange jerseys in 1975 – identified by the orange-inclusive helmet logo. In 1974 and 1975 it appears that some players wore plain white sanitary socks below their regular orange socks while others wore striped 'sanies' below the orange regulars. Above are the 2 different logos as well as two different sets of sanies and nameplates - both from 1975. 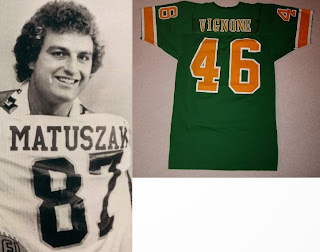 The Houston Texans/Shreveport Steamer franchise shows some irregularities with their nameplate fonts - a seriffed font evolving into an outlined, seriffed font. 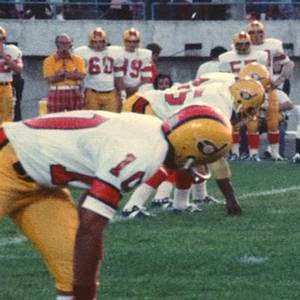 Some claims exist that a few teams, namely Philadelphia and Detroit, wore both grey facemasks and colored facemasks. Indications vary as some believe this was allowed to happen with no thought towards uniformity while others claim that the grey facemasks were simply the result of the yellow paint chipping off of originally grey facemasks as the season progressed. We may never know the truth, but the photo above tends to make me lean towards a peaceful co-existence of originally grey and yellow facemasks. 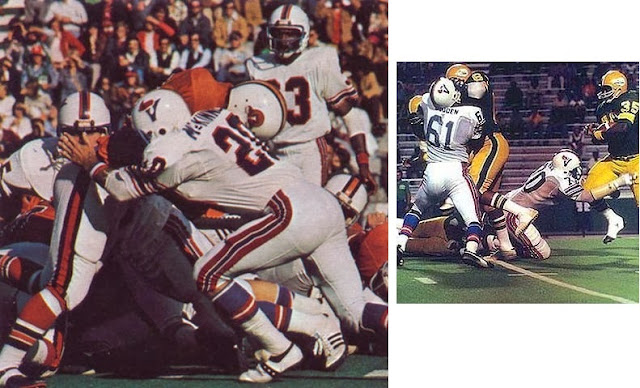 The Birmingham Vulcans appear to have worn two different versions of the white jerseys in 1975. One version had blue numbers outlined in red with a typical blue nameplate font. The other version had blue numbers without an outline and a much smaller nameplate font. My guess is that the latter were similar to the mesh jerseys also worn by NFL teams in the 1970s based on the weather conditions at game time as opposed to the durene jerseys generally worn during colder weather. This may also have been the cause for the different fonts on Memphis' 1975 jerseys noted above, as well, however those Memphis jerseys showed no other disparity other than the nameplates. 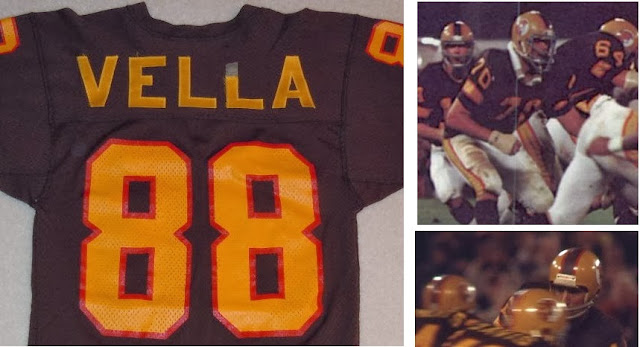 The Hawaiians began the 1974 season with a helmet logo depicting a white-faced Hawaiian native but changed it at some point to a pinkish skin tone. There is a possibility that at some point the skin tone was further darkened to a brownish shade but I have been unable to find photographic proof of this as yet. Their jerseys also had enormous nameplate fonts!

There also exists the rumor that the Jacksonville Express played part of their 1975 season with a helmet logo with a white background. However, all photos I have uncovered show the logo's background color to be the same yellow as the helmet.

While similar to the USFL project in that I hope the addition of the WFL will add to the casual fans' knowledge of a very small, unique slice of pro football history, it differs in that, due to my age, unlike the USFL, I have absolutely no recollection of the league that played up until I was 3 years old. In some cases, it's been easier to find NFL photos from the 1930s and 1940s than it has been to find photos of the WFL less than forty years after it ceased operation.

As with the rest of the site, if you have any photographic proof that contradicts what we've added, by all means post your evidence in our Forum as our mission to "Just get it right" continues to live on.