A Head To Head History: The Tennessee Titans and the Houston Texans 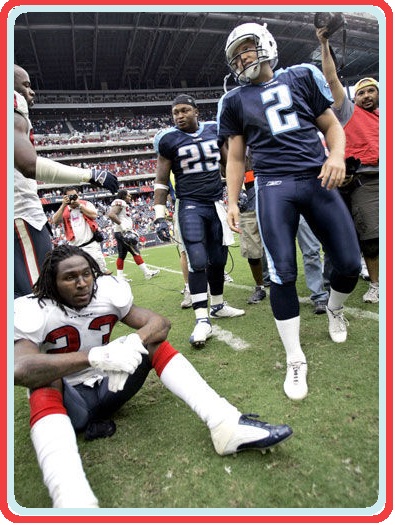 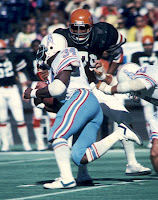 The Oilers abandoned the city of their birth following the 1996 season. After spending two seasons as the Tennessee Oilers, they were rechristened the Tennessee Titans in 1999. The accompanying complete uniform makeover included the iconic Columbia Blue changing to “Titans Blue”, though it was still similar.

The Houston Texans filled the void left by the Oilers in 2002, dressed in the colors of the state flag: navy blue, red and white. Their first game was against their in-state rival Dallas Cowboys, and the Texans started in style with a surprising 19-10 upset victory.  Coach Dom Capers seemed to have a sense of history, as he had the Texans wear their white jerseys at home, forcing the Cowboys to wear their “bad luck” blue jerseys. 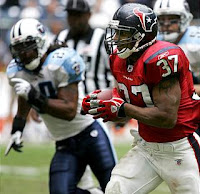 In the game at Tennessee that year the Titans broke out their new Titans Blue alternate jerseys, which gave them a bit of an Oilers feel, and wore them over their navy pants. Steve McNair had a prolific game for Tennessee with 421 yards passing and three TD’s in a 38-17 win. The game in Houston was closely contested as McNair lead a 4th quarter comeback for a 27-24 victory.

The Texans finally found the win column against their rivals in 2004. The Houston defense gained a measure of revenge as they intercepted McNair four times in a 20-10 win in Tennessee. As in 2003, the Titans wore their alternate jerseys over navy pants. The rematch in Houston saw the Texans sweep the season series in their “Battle Red” alternate jerseys and white pants as they overcame a 21-3 deficit for a 31-21 win.

Tennessee began a seven-game win streak over Houston in 2005, with some of those wins coming in dramatic style. swept the season series the next three years. The first meeting in 2005 saw the Texans wear white-at-home over navy pants and  in the titans in their navy blue jerseys and white pants.  At Tennessee the Titans wore their now familiar alternate Titans Blue jerseys over navy blue pants. 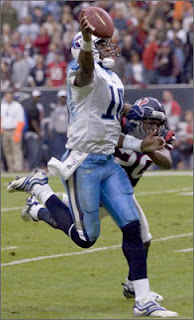 The same was true for the 2006 game at Tennessee, but at Houston the Titans wore their new Titans Blue pants with their white jerseys. This game was hugely anticipated as Texas Longhorn alumnus Vince Young returned to play in his native Houston. Many Houston fans had wanted the Texans to draft Young, but they instead chose DE Mario Williams. Young’s passing day was unremarkable (218 yards with an INT), but he won the game in overtime with a 39-yard touchdown run, sending the Houston fans home with mixed feelings.

In 2007 the Texans again went white-at-home, but this time the Titans wore an all-navy blue ensemble in a thrilling 38-36 shootout. Entering the 4th quarter, the Titans owned a seemingly secure 32-7 lead over the Texans, who were under the guidance of QB Kerry Collins who filled in for an injured Vince Young, and six Rob Bironas FG’s. Sage Rosenfels (who took over for Matt Schaub during the 2nd quarter) tied an NFL record with four TD passes in the 4th quarter, and gave the Texans a 36-35 lead with just 0:57 remaining. Collins then led the Titans from their own 20-yard-line to the Houston 11 in five plays, setting up Bironas for the game-winning and record-setting 8th FG.

The Texans ended their frustration with the  Titans in their second meeting in 2008. Andre Johnson registered the only touchdown in a game that saw Bironas and Kris Bown exchange six FG’s for a 13-12 Houston final score. The Titans again harkened back to their Houston routes for the occasion by wearing white jerseys and Titans Blue pants.
The following season, Houston registered their first road win in the series since 2004. The Titans wore white-at-home and their now standard Titans Blue pants for the September match-up. The Texans wore their Standard navy blue jerseys and rode the passing combination of Schaub (357 yards, four TD)  and Johnson (10 catches, 149 yards, two TD) to a 34-31 win. Kris Brown decided the outcome with a FG at 2:58.

Brown would not fare as well in the rematch at Houston on a Monday night in November. The Texans wore their red alternate jerseys with the Titans in the same uniforms they wore in the first game. Bironas broke a 17-17 tie with a 53-yard FG with only 52 seconds remaining in the game. After the kickoff, Schaub moved the Texans from their own 38 to the Tennessee 31, but Brown’s 49-yard attempt sailed wide left. 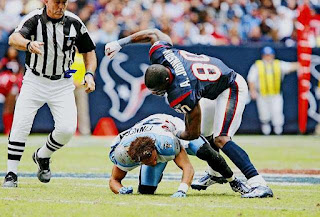 The Texans won the first 2010 meeting handily, 20-0. However, the game is remembered by fans around the league for the fisticuffs between the NFL’s #1 instigator Cortland Finnegan and the normally mild mannered Johnson. Midway through the 4th quarter with the Texans ahead 17-0, Finnegan and Johnson exchanged words after a succession of running plays. The second time, Johsnon shoved Finnegan, who removed his helmet and shouted back at Johnson. At the snap on the following play, Finnegan jabbed at Johsnon’s facemask, who tore off and flung Finnegans helmet and landed several blows before players from both teams and officials intervened. Both players received $25,000 fines.

The Titans won the much more civil rematch in Tennessee in Novmber 31-17. The only change in uniforms from previous years was the Texans now wore navy socks with their navy pants, and the Titans featured what has now become their standard home uniform: Titans Blue jerseys over navy pants.

Houston won a 41-7 blowout in Tennessee in 2010 on the strength of their rushing attack and defense. Both Ben Tate and Arian Foster topped 100 yards rushing while their defense limited the Titans to just 53 yards on the ground and 11 total first downs.

The Week 17 rematch in Houston was a closely contested game that saw both teams with winning records and their sights set on the post season tournament. the first three quarters saw Bironas now exchanging FG’s with Neil Rackers. Titans QB Matt Hasselebeck broke a 16-16 tie with 4:39 left in the 4th quarter on a 23-yard pass to Nate Washington. Jake Delhomme (filling in for the injured T.J.Yates) responded with a TD of his own with only 19 seconds remaining. Texans Head Coach Gary Kubiak eschewed the conventional PAT and attempt a 2-point conversion to avoid overtime. Since the Texans had already clinched the AFC South Division Title and were locked into the AFC's #3 seed there was nothing to be gained by extending the game into an extra period. The pass failed and although Tennessee finished with winning 9-7 record, they were eliminated from the playoffs via conference tie-breakers later that day when Kansas City defeated Denver.

These teams renew their spirited rivalry in Week 4 with the undefeated Texans playing the unfamiliar role as an AFC powerhouse, but the Titans have an uncanny tendency to surprise the Texans with memorable performances in the clutch. 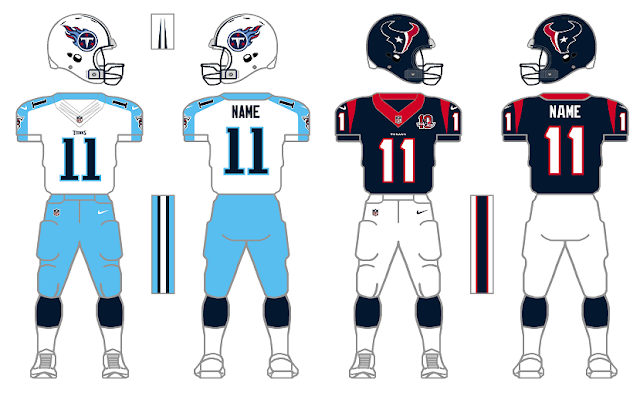