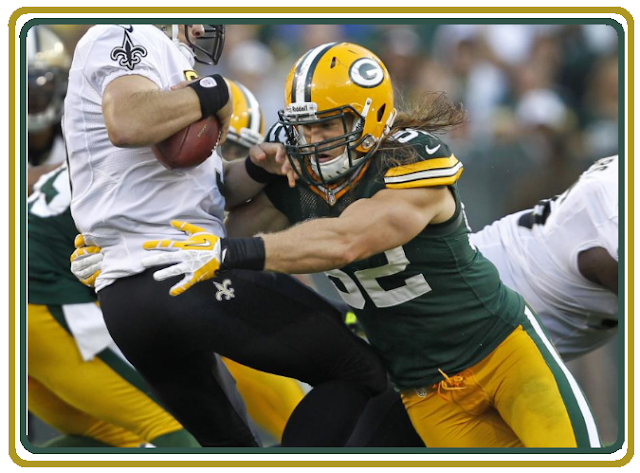 Welcome back for the weekly uniform matchup rankings (Week 4), but first a couple of items we want to bring to your attention:

We recently added a couple of things to the GUD's research tab. They are:

1) A descriptive listing of the uniform history of the Chicago College All-Star Game. For the uninitiated, the College All-Star Game took place each year (except for 1974) from 1934 through 1976.  The game pitted the NFL (or Super Bowl) Champions from the previous season against the the most talented Collegiate all-stars.  It was almost always held at Soldier Field and was always played at night.  In the game's early days, it was a huge deal.  In fact, attendance for the game was always strong, but in particular, in the 1940's.  During this decade, the average gate was in excess of 90,000 and on three occasions, topped 100,000.  We are pleased to add this chapter to the GUD.

2) A graphical history of Helmet Decals.  With the capable and talented hands of Bill Schaefer and the help of you, the faithful GUD followers, we have been able to compile - to our knowledge - the most comprehensive single source of helmet decals to be found anywhere.  The decal history portrays all known commemorative and memorial decals that have been found on the backs of the helmets and in some cases, the front bumpers of the helmets for every team - and player - that wore them.  The only decal I know that isn't shown is the Warning sticker (that tells the wearer not to use the helmet as a spearing weapon, among other things).  We strongly urge you to look them over and if you happen to find any that we're missing, please contact us with pictorial proof and dates that the decals were used.  We thank those who helped Bill with this tremendous addition to the GUD.

And now, to the review:

#15. Dolphins-Cardinals: MIA in all white with ARZ in red/white. You don't know how disappointed I was when I heard - and saw - the Dolphins ditching the wonderful white/aqua away look for their dullish home all white duds. This one goes down numerous pegs for that alone. hey, at least the Cardinals returned to their red roots or this could have been a disaster.

#14. Titans-Texans: TEN in white/columbia and HOU in dark blue/white. Another two-toned blue affair that doesn't dull the senses. However, like the NE-BUF pairing, lots of blue, but only a hint of red. A little more red would make this even better.

#13. Patriots-Bills: Pats in white/navy and the Bills in blue/white. A traditional rivals game with some nice color. Silver, navy, red and blue. While it works, I think a red Bills helmet would have been icing on this cake. While it still has some good taste, I am just not stoked for it. 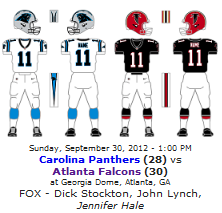 #12. Panthers-Falcons: CAR in all white with the ATL in throwback black/white mode. Falcons also go full throttle with the 1966 throwback with the red helmet. The Falcons get a lot of love for this particular throwback and while I do like it, I like the '67 white falcon jersey better. Panthers answer with their normal all white visitors scheme. It's nice, but not a knockout.  (I personally prefer the 1981 red jersey with gray pants Steve Bartkowski era throwback look for the Falcons.  -RH)

#11. Redskins-Buccaneers: WSH in burgundy/white and TB in white/pewter. Darn! Skins rocking the white pants for the first time this (regular) season and the Bucs in the early season WAH look. I could have let the Skins go if they had pulled off wearing the striped socks, but...A little downer. Bucs still look nice, but I really think those red jerseys should be always the home jersey.

#10. Browns-Ravens: The Thirsday nighter featured the Browns in all white with the Ravens in purple/black. The perfect Ravens uni against the classic Browns model. With the orange helmet on the Browns, it makes for a nice look. This happens to be my favorite Ravens combo.

#9. Seahawks-Rams: SEA in white/gray and STL in all dark blue. If the Rams stayed with gold pants, this matchup would be flirting with #1. The Seahawks continue to impress - yes, impress - me with these 2012 uni combos. I can get into this one, but not enough for a top 5 berth. 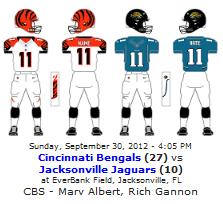 #8. Bengals-Jaguars:  CIN in all white, JAX in teal/white. A little explanation here. It was announced before this game that the Jags would wear teal tops for the last time effective with this game and then switch to black (yawn) jerseys from here on for 2012. Some of the folks out there asked how could the Jags get away with a mid-season change when the NFL requires a jersey schedule by July 1? Simple. The Jags, most likely, MADE that decision the proper way. And the teals this year became the alternate jersey! As I understand, a team can wear an alternate or throwback a maximum of three times during the pre and regular season. JAX likely informed the NFL of their jersey schedule properly by the deadline. The decision simply wasn't leaked to the public until the last week or so. Basically, much ado about nothing. Oh yes, the matchup. Bengals could have given us black pants, but with the teal farewell, no points deducted.

#7. Chargers-Chiefs: SD in white/navy and KC in red/white. After two weeks in all white, the Chargers revert back to current form with the navy britches. And it plays much better than if they had stayed all white. The offset stripes on the Chiefs sleeves may be only a little change, but a much needed one. Makes the stripes pop a bit more. Well played. 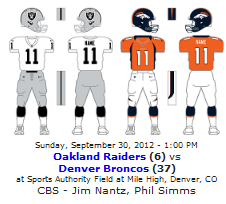 #6. Raiders-Broncos: OAK in white/silver, DEN in orange/white. The way it's supposed to be. After many years with the Broncos in dark blue and sometimes ALL dark blue, this is a quality, traditional look with flair. Sweet.

#5. 49ers-Jets: SF in white/gold, NYJ in green/white. I guess a little too early in the season for the jets to go Gang Green? Niners in the uni that makes the gold pop. Still, while conservative, this is a good uni matchup. The reds, golds and greens have a good feel.

#4. Vikings-Lions: MIN in all white with DET in honolulu-silver. As expected as any game would be. Very traditional, and actually a good contrast. The purple trim works well with the palish blue and silver trim. with a touch of black.

#3. Bears-Cowboys: As always, no major jaw-droppers here. Normal looks for these two, CHI in navy/white and DAL in white/mint. Good solid looking football uniforms and colors, the multi-silver hued Cowboys actually plays sweetly off the navy and orange Bears. I'm tellin' ya, though, the Bears are one of several squads that seem to have noticeably larger back numbers with the new Nike jerseys than under the old Reebok system.

#2. Giants-Eagles: NYG in white/gray. PHI in green/white. Boy, the Eagle green doesn't seem as dark to me these days and if true, that is a plus. Two old line teams with nice colorful contrasts. red, blue, green and the customary black. Good show!

#1. Saints-Packers:  NO in white/black and GB in green/yellow. Yep, I might be one of the few who jack up the rankings here for the Saints going with the black pants, but so what? Packers always look marvelous in the green/yellow combo. 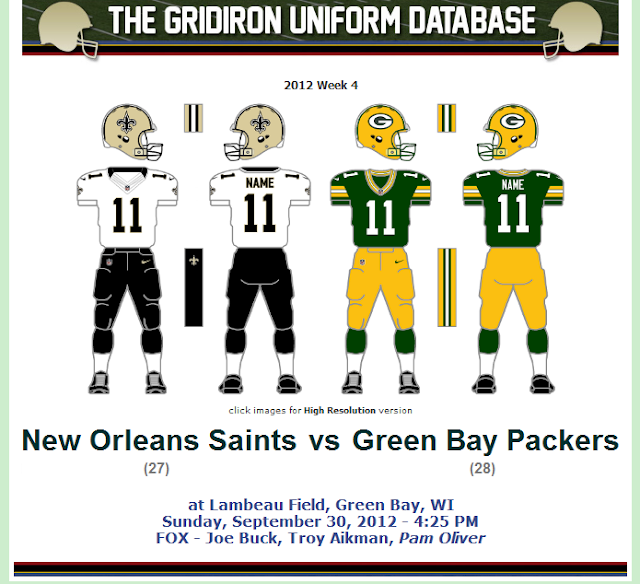 That's it for Week 4. Again, please do check out the new additions to the GUD's research page. We trust and hope you will find them of interest.