London blitzed by the Brady Bunch – an English perspective

Here at the Gridiron Uniform Database, we are proud to offer special guest blog today.  As you may or may not know, the creator of our wonderful banner graphics, Mark Young, lives in England and he was in attendance at the Patriots-Rams game Sunday.  He graciously offered to recount the experience for us in today's blog.  Bill Schaefer will be back on Thursday will his usual segment on 1940s versions of today's uniforms as he takes on the AFC West, and Tim Brulia, as soon as he recovers from the winter hurricane storm, will be along later in the week with this week's uniform matchup rankings. 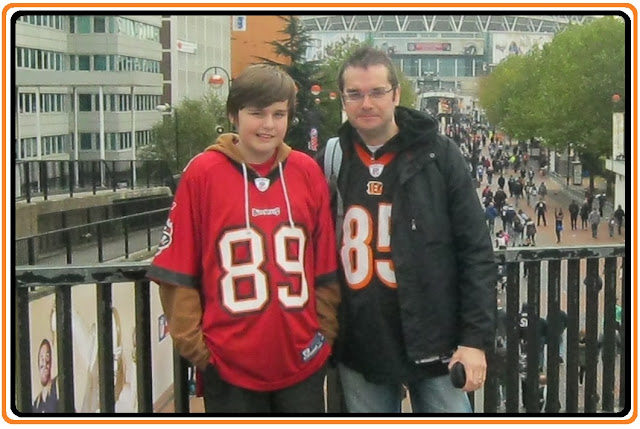 So much anticipation going into my second International Series game after breaking my duck1 for the Bucs v Bears game last year. After leaving early for the 3 hour drive to Wembley, nothing makes the hairs on the back of my neck stand up more than seeing the Wembley arch in the distance, followed by the walk up Wembley Way. My fourth visit to the new stadium, looking forward to what we hoped was going to be another great advert of how the UK can welcome and host the NFL's finest.

Seeing such an array of NFL shirts amongst fans arriving is always going to make the IS game more of a neutral spectacle – a love of the sport – rather than a passion for the two teams playing. Although a big UK following for the Patriots would make this more of a home game for them against the promotion of the Rams as ‘our’ home team to follow. 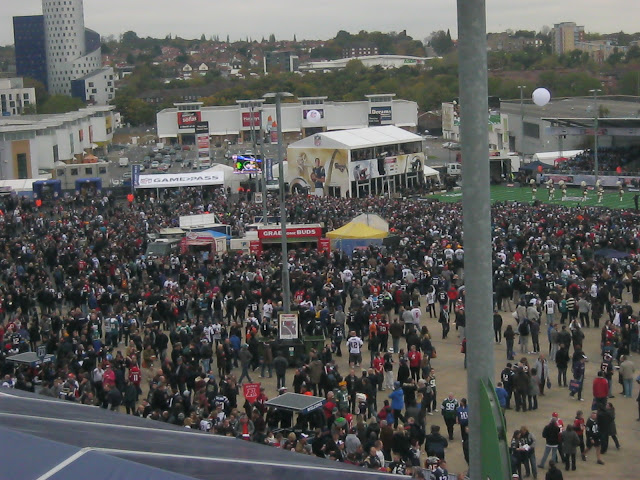 The tailgate was somewhat disappointing compared to last year’s… other than the field stage, there was little on offer other than food and drink. Not a bad choice I guess! But one thing the UK fan is not happy with is the extortionate cost of everything in ‘London prices’. So, after buying my £10 beast of a programme, my son and I entered the stadium.

Now I’m afraid I’m a neutral too… So despite wearing a Bengals jersey (only bought because the colours match that of my beloved ‘soccer’ team ‘Wolves’ -- that's me in the picture at the top, with my lad Scott in the Buccaneers jersey), I can honestly say I’ve never been to, nor will ever go to a Bengals game…unless of course they came over here for the London game… But the same can be said for the majority of those that turned up. Many fans have particular teams they support/follow, but we just love the game and all we want is to enjoy seeing it played on our home shore. 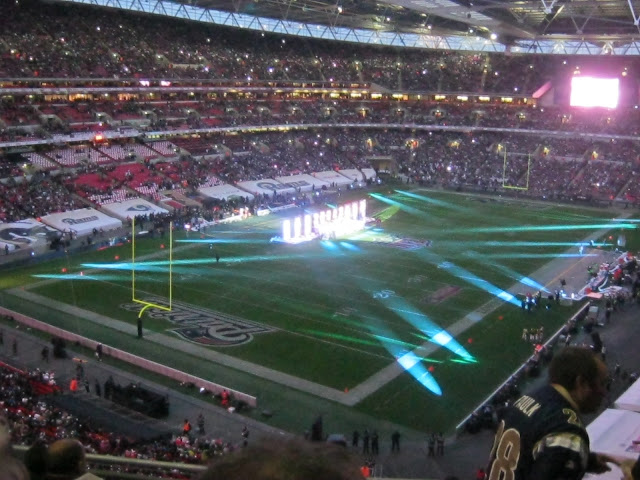 The Brady inspired Pats were simply outstanding, despite the impressive first, and only, score of the Rams with Bradford’s 50 yard pass to Givens giving us false hope of an actual competitive game on show. But the Pats signaled their intent from their opening play when a simple Brady pass to Lloyd leveled the game up. You sensed then that this game was only going one way. And that it did.

The UK crowd can often be subdued, and with constant reminders on the screens to ‘cheer for the Rams,' it was pretty obvious we had been duped into following a non-starter, and the crowd would have none of it. We always like an underdog, but as much as we are grateful for this one game a year, we DO want to see a contest. The only bonus from this is seeing Tom Brady and Rob Gronkowski on fine form… It was a great sight to see these two players on the same wavelength. A simple mixture of rushing and passing from the Pats left the Rams defense with no answer. Brady had so much time to pick his receiver with every passing play it became embarrassing – even Bill Belichick had a smile on his face… Oh hang on, no he didn’t.

On the positive side of things, this is NFL, and it’s in England, and that is something all us UK fans are so grateful for. The 84,004 attendance (8,000 up on last year although the planned lockout may have caused the lower crowd last year) is our big selling point. Wembley Stadium is simply magnificent, regardless of its fantastic history, seeing the stadium packed sends a massive signal to Roger Goodell that we want to keep hold of NFL. Also want to praise both the NFL and Wembley. As I work for a sports Governing Body in the UK dealing in sports presentation as one of my roles, the organising and attention to detail was outstanding – nothing but praise to all concerned. 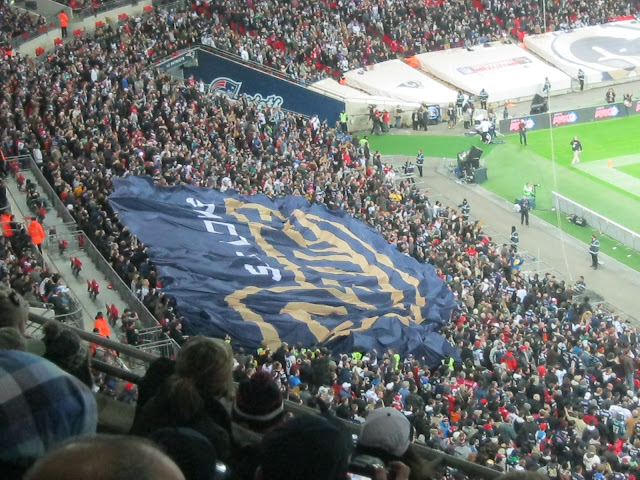 On the negative side, ever since the announcement that the Rams would be the home team, we always knew this would be a miss-match, sending those fans who had specially bought Rams jerseys and merchandise feeling a bit cheated, wondering why they had bothered. Also disappointing was seeing how quick the stadium emptied. During the fourth quarter, about three quarters of the ‘fans’ had gone, leaving Wembley looking very empty. I know the contest was over by then, but at £50 - £100 a ticket you would have thought people would stay till the end. Oh, now this maybe a British thing, but when you are watching a game in the States, do you get people constantly wanting to come past you every five minutes?! It infuriates us! Look, if you want to drink beer then great, but remember it means every 15 minutes you will need a pee! These people hardly see the game, and makes the rest of us so pissed off when we have to stand up, sit down, stand up, sit down all the time! Sorry, rant over. Apologies for Boris Johnson too… This guy really is a tool and never let’s us down with outrageous comments… Again he delivered.

The second half seemed to have way too many yellow flags tossed in… with collective groans of ‘not again’ from those of us left, frustrating us for the remainder of the game. We are used to fast action of soccer here and a lot of fans are not used to the stop/start of NFL. 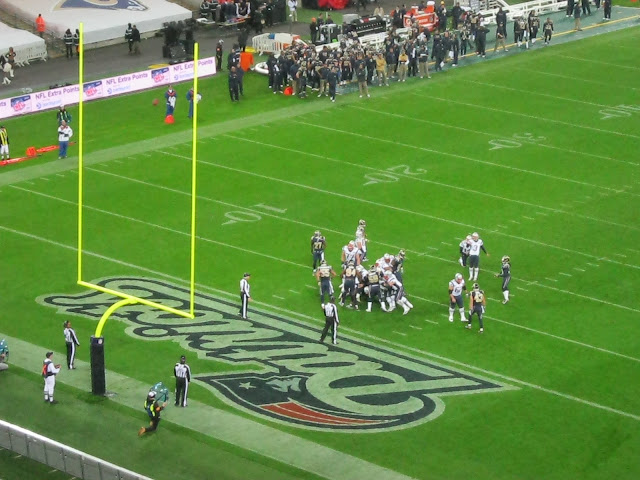 Overall another great IS experience. Two games next year? Hmmmm…. The Vikings v Steelers will be a probable sell out, but not sure about the Jags v 49ers game. With only a month between them, it will take some ticket deal for both games to ensure they both sell out. It’s an expensive game watching NFL at Wembley, as seeing the England soccer team is about half the cost. My fear is the Jags game will get about 50,000 unless they strike a deal to attract more people. I hope I’m wrong. I doubt I can afford both games, so naturally I will take in the Vikings/Steelers game as it’s the first one. It’s a bold move to have two games here, I hope and pray it doesn’t backfire.

UK Jags franchise in the future? That seems to be the rumours. I’m not sure it will work. We are either fans of the game, or have teams we already follow. A UK based franchise would be a bold move. To succeed they need to be challenging, and not whipping boys like the Rams were - people won’t want to see a side losing every week. Also cost… prices would need to be reduced to get a sell out each time, and with that we would lose a lot of the razzmatazz that goes with it. That, to me, is another great selling point. We are not used to all the pre match build up that whets our appetite before the IS game. That is part of the spectacle and attraction too. The cheerleaders and Train were simply a delight that kept us happy. You really feel like you’ve been to a great event, from a sporting and entertainment point of view.