A Head-to-Head History: The New York Jets and The Miami Dolphins 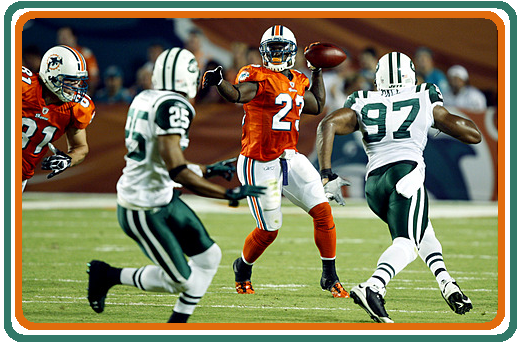 The New York Jets and Miami Dolphins renew one of the most spirited division rivalries that has produced some of the most memorable moments in the post-merger NFL history.

Miami entered the AFL as an expansion franchise in 1966 just as New York was ascending on the arm of quarterback Joe Namath. The Dolphins appropriately displayed colors of their surroundings and new to professional sports - aqua and orange. The Jets, who were a charter member of the league in 1960 as the Titans, wore kelly green and white. As expected, the established Jets dominated the early series between the teams, winning the first either meetings. The 1967 meeting in New York indicated a sign of things to come as Namath struck through the air with 415 passing yards and three touchdowns. Receivers George Sauer and Don Maynard both had 100-yard receiving efforts. 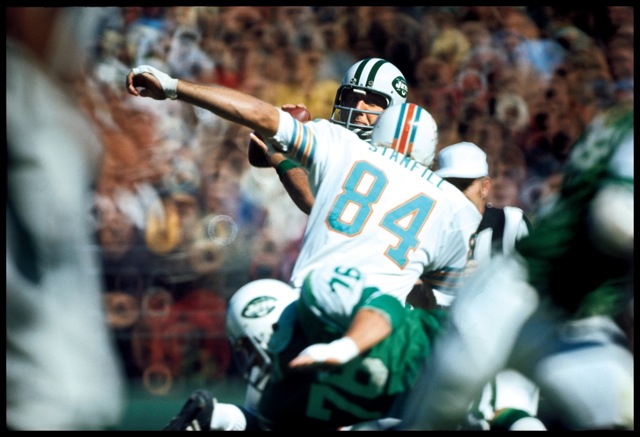 The AFL-NFL merger in 1970 saw a new era begin for the Dolphins. New coach Don Shula, who had lost Super Bowl III to the Jets as the head coach of the Baltimore Colts, immediately established a winning tradition with a 10-win season and playoff berth, sweeping New York in the process. After splitting the season series in 1971, the Dolphins won 11 of the next 12 games from their AFC East rivals. Included was the worst game of Namath's career, an eight for 24, 96-yard, six interception nightmare as the Jets lost at home 43-0. 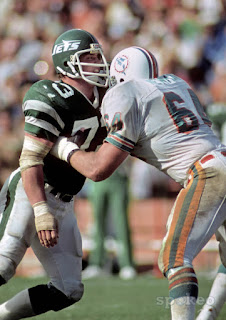 Fortunes reversed in 1978 when the Jets revamped their uniforms. The white helmets and green football logo were replaced with green helmets and "JETS" spelled out. New York's new aerial connection was Richard Todd, throwing three touchdown passes, and Wesley Walker catching two of the scores and totaling over 1oo yards receiving in the opening day victory at Shae Stadium, the Jets first victory over Miami in New York since 1969. As the players who lead the Dolphins to three consecutive Super Bowl earlier int eh decade retired the balance of power swung, and the Jets swept the season series through 1980. Entering the new decade, the Jets - Dolphins games became a premier event.

The October 1981 game in Miami saw a back-and-forth offensive circus in which the teams combined for nearly 1,000 yards. Todd threw four touchdown passes, and again Walker was his primary target with another 2 touchdown, 100 yard game. Don Strock took most of the snaps under center for Miami, sharing time with David Woodley (Miami fans referred to this combination as Woodstrock). Nat Moore had a career day with 210 yards and two touchdowns on just seven catches. Neither team scored in overtime and the game ended in a 28-28 tie. The rematch in New York in November was a more defensive controlled game as the Jets came from behind on a late touchdown pass from Todd to Jerome Barkum for a thrilling 16-15 victory that saw fans storm the Shea Stadium field. Miami won the AFC East whit an 11-4-1 record and New York finished second at 10-5-1.

Miami won the first game in New York big, then had a dramatic come-from-behind victory of their own in December in the Orange Bowl. Strock relieved Woodley in the second half and led the Dolphins to a deciding field goal by Uwe von Schamman at the gun for a 20-19 win after Jet kicker Pat Leahy missed afield goal of his won (he also missed an extra point in the first quarter.) The teams met for a third time in the AFC Championship Game on a rain soaked quagmire in the Orange Bowl. Jets head coach Walt Michaels complained the Shula had left the field uncovered to slow down New York's high powered offense. Aside from their dangerous passing game, halfback Freeman McNeil lead the NFL in rushing in 1982. Both offenses struggled and combined for nine turnovers. Miami made the most of the Jets mistakes however, as linebacker AJ Duhe intercepted Todd three times and ran one back for a touchdown in the dolphins 14-0 win. Michaels was controversially relieved of his duties on the flight back to New York, and Miami lost to Washington in Super Bowl XVII. 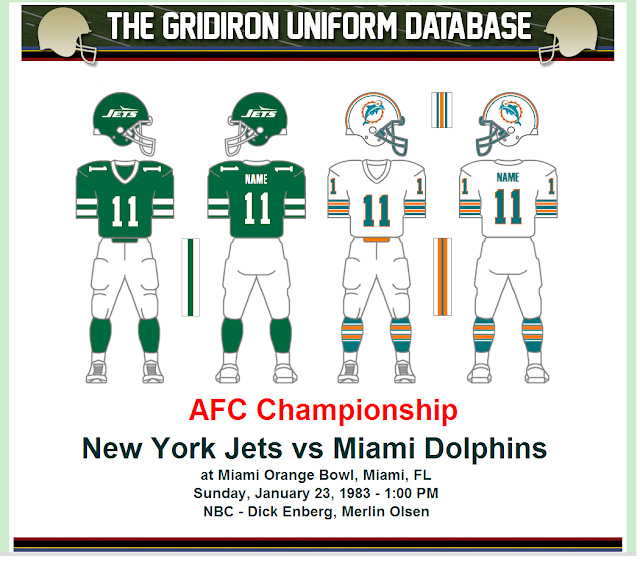 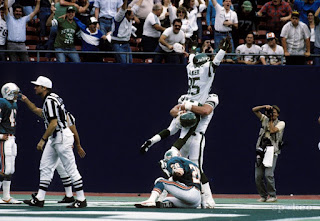 New faces at quarterback for both teams in 1986 began a new era of offensive fireworks. Week 3 in the Jets new home Giants Stadium (where they now wore their white jerseys under head coach Joe Walton.) Ken O'Brien and Dan Marino put on a remarkable display of passing, combining for a record 884 yards. Walker caught touchdown passes of 65 and 50 yards in the second quarter to give the Jets a 31-21 halftime lead. Marino brought Miami back with a 17-point third quarter for a 38-31 lead. The teams traded touchdowns before O'Brien brought New York down-field and connected with Walker again on a 21-yard scoring pass with no time left on the clock to force overtime. Walker caught his fourth touchdown pass in the extra period to give the Jets a 51-45 win, propelling them to a franchise record nine-game win streak. The 10-1 Jets met the 5-6 Dolphins for a Monday Night Football rematch in November, and the result was shocking, dramatic and reverberating, but also incredibly one sided. Marino was sharp again for the Dolphins, with 288 yards and four touchdowns. Lorenzo Hampton added 148 yards on the ground and two more scores, and the Miami defense forced four takeaways. The end result was a 45-3 loss for New York and the start of a five game losing streak to close the regular season. The Jets did qualify for a Wild Card playoff berth, where they defeated Kansas City before dropping a double-overtime contest to Cleveland in the Divisional Round.

Offensive fireworks were on display again in 1988 when Marino became just the fifth person to pass for 500 yards in a game. The 521 yards were the second most at the time, but unfortunately Marino also threw five interceptions one of which was returned my Erik McMillan for a touchdown, and Miami lost 44-30. Marino and O'Brien again tried to out-duel one another in September 1989 at Dolphins Stadium. O'Brien threw for 329 yards and three touchdowns in the winning effort. Marino was again valiant in defeat, out-compiling his counterpart with 427 yards and three touchdowns, but New York scored the last 14 points of the game in the 40-33 win. 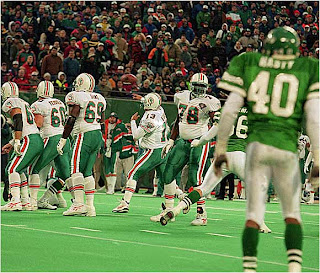 In November 1994 the teams met with first place of the AFC on the line. The 6-5 Jets led the 7-4 Dolphins 24-6 late in the third quarter. Marino again had a prolific effort against New York, totaling 359 yards and four touchdowns (all scores to Mark Ingram.) Back-to-back scoring drives cut the led to 24-21. One last drive by Marino had the Dolphins on the Jets five-yard line with 30 seconds left and the clock running...Marino motioned at the line as if her were going to spike the ball to stop the clock, but instead lofted a pass over cornerback Aaron Glenn to Ingram for the winning score. The Jets then fell into a tailspin, dropping the rest of their games to finish 6-10.

In December 1998 the teams met again with first place on the line. The 9-4 Jets visited 8-5 Miami. New York's defense was up to the challenge this time, as they sacked nemesis Marino five times, intercepting him once and returning a fumble for a touchdown in the 21-16 prime time win. The Jets went on to win their first ever AFC East title with a 12-4 record, while the 10-6 Dolphins qualified for the post season as a Wild Card. 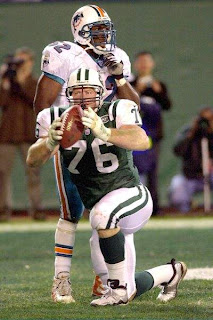 Another prime time match-up occurred on a Monday Night in October 2000 between the two 5-1 teams in Giants Stadium. This game would go down as one of the biggest comebacks in NFL and would come to be known as the Monday Night Miracle.  Miami led 23-7 at the half, with the Jets offense totaling a measly two first downs, and 30-7 after the quarters. Seventeen unanswered points cut the deficit to 30-23. Following a three-and-out by Miami, Vinny Testeverde hit Wayne Chrebet for a touchdown to tie the game 30-30, fans who had been walking down the rotundas out to the parking lots rushed back in to their seats. Jay Fiedler responded with a one play drive - a 46-yard touchdown pass to Brock Marion to regain the lead 31-30. Testeverde responded with a 70-yard drive, capped off with a juggling catch by tackle-eligible Jumbo Elliot to send the game to overtime. Miami received the overtime kickoff and drove in New York territory, but a Fiedler was intercepted and John Hall won the game for the Jets with a 40-yard field goal.

Eight years later the teams met again in Giants Stadium with first place on the line, this time in a Week 17 winner-take-all showdown. Adding a little extra drama to the mix was the Dolphins being quarterbacked by long time Jet stater Chad Pennington, who had been released after the Jets traded for Brett Favre prior to the start of training camp. On opening day in Miami, Pennington had nearly lead the Dolphins to a come-from-behind win against his former team, but a pass into the end zone with three seconds remaining was intercepted, giving New York a 20-14 win.  Neither quarterback compiled impressive statistics, but Pennington played a turnover free game, compared to Favre, who had three passes intercepted. Pennington lead the Dolphins from behind with 10 unanswered points spanning the third and fourth quarters for a 24-17 win and division crown. 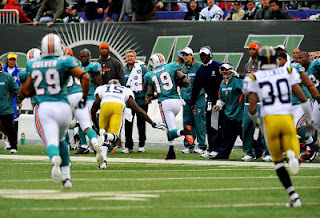 Ronnie Brown and the Dolphins wore orange (see picture at the top) in a Week 5 primetime home game against the Jets (a 31-27 Miami win) in 2009.  They met again three weeks later in the Dolphins final visit to Giants Stadium and Tedd Ginn Jr. had a remarkable game. The Jets, who went white-at-home in the navy blue and gold Titans of New York throwback uniforms, broke a 3-3 third quarter tie with a 55-yard Jey Feeley field goal. Ginn subsequently returned the kickoff 100 yards for a touchdown. Jason Taylor returned a fumble for a touchdown before Mark Sanchez scored a one yard touchdown, cutting Miami's lead lead to 17-13. Ginn struck again, returning the kickoff 101 yards, and became the first player to return two kickoffs for scores in a single quarter of play, and the Dolphins held on for a 30-25 win.

Big plays and big performances highlight the Jets-Dolphins rivalry, and there are certain to be more to come.  Look for the officials to use pink penalty flags in Sunday's game as Breast Cancer Awareness month comes to a head.